There’s a growing rift between the real economy and the markets.

As regular readers know, it has left our planet fragmented… on economic, political, and societal levels.

And nowhere is that distortion more evident than in the world of infrastructure.

Infrastructure is one of the most important investment trends on my radar today. It’s the underlying force that powers and connects our five key profit themes for 2022.

From the materials needed to build a more sustainable world… to the electric grids that power our world… infrastructure touches them all.

And for investors, this presents profit opportunities. Below, I’ll give you one way you can take advantage.

Yesterday, I showed you how the behavior of the markets has become permanently distorted from the real economy.

There’s no going back to how things were.

The distortion has ignited the desire to create and do things differently. To upgrade, fix, build, and innovate across platforms.

And free-market visionaries aren’t the only ones working to build a better world. Governments also know they need to spend on infrastructure.

Consider this. The World Bank recently cut its global economic growth expectations for 2022.

That’s despite the massive amounts of money central banks have produced since the pandemic began. (Which, supposedly, they did to help the real economy.)

That means we need tangible projects to spur real progress. And that means more infrastructure development on a global scale.

It’s also why politicians left, right, and center agree that a construct-and-reboot is essential. (Even if they don’t agree on all the details.)

The chart below comes from the World Economic Forum. That’s the group of elites who know where the money is going – because they control so much of it. 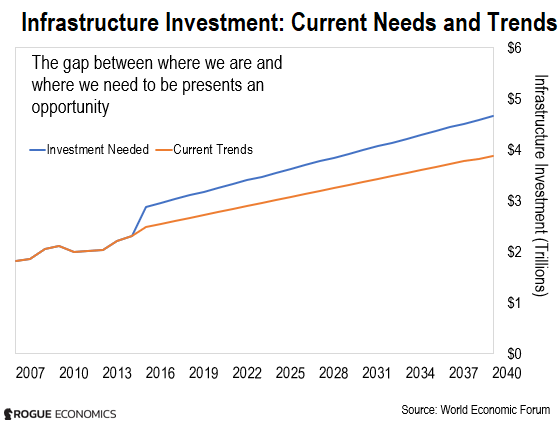 As you can see, it will take some time to meet these infrastructure goals. But the gap between where we are and where we need to be is an opportunity for you.

You see, political leaders are finally kicking into gear and allocating funds to this area.

Global competition to update and build infrastructure has pushed countries to increase public investment. And it has invited private sector funds as well.

Right now, the private sector provides just 1% of the funding required for infrastructure projects. But I expect that to grow at least two-fold over the next few years because of today’s distortion.

The private sector’s focus has been on investing in financial assets over physical ones. It often waits for the public sector to dole out money, and then takes it from there.

We’re now seeing a big push for infrastructure investment from the public sector. So it’s only a matter of time before the private sector jumps in to get its cut.

I expect a lot of that money to flow into raw materials. And copper is a big one.

If the world has run on oil for the last century, the 21st century will be the age of copper. By the end of the decade, every major part of the economy will need copper.

Copper is already used in personal electronics. It’s used in construction, too. And now, demand for copper in energy and transportation is also growing.

That includes the push for a greener future, which is another major driver for copper. There, demand will come from everything from wind and solar power plants… to electric vehicles (EVs).

EVs, meanwhile, use three times more copper than internal combustion engine vehicles. And with countries around the world pushing for a cleaner future, the EV market is set to grow.

Today, about 10% of new vehicles sold in the world’s major markets are electric. By 2030, that figure could be closer to 50%, according to Bloomberg.

Much of that demand comes from China. It already accounts for 54% of annual copper demand, and it continues to modernize. That means burning less coal and relying more on renewables.

All combined, this is setting the stage for a major copper bull market.

Copper prices rebounded better than any other commodity in 2020. They’ve spent most of the last year bouncing around the 2011 peak levels.

But I don’t expect that to last much longer, thanks to the push for a greener future. Which means now is a great time to buy copper.

And one way to do that, if you haven’t positioned yourself yet, is through the United States Copper Index Fund (CPER). It’s an exchange-traded fund that tracks the price of copper.