Last Wednesday, I wrote about a new flood of money coming out of Washington…

The Senate voted to pass the Act last Sunday. And on Friday, the House passed the act as well.

The IRA covers a lot of ground – from Medicare to biofuels to the Affordable Care Act.

It does pack a strong punch for two of our distortion profit themes – New Energy and Infrastructure. And it will light a fire under the energy transition.

Today, I’ll give you one way you can position yourself to profit. But first, let’s take a closer look…

A $369 Billion Win for the Energy Transition

The IRA’s focus on energy security and climate change investments is vast.

Half of it, or a $369 billion investment, is set to stream into domestic materials, supplies, and technology.

It will also go toward production, manufacturing, and upgrading of the U.S. energy space.

And remember, this isn’t the only big move the government has made recently to push New Energy and Infrastructure forward.

The Inflation Reduction Act adds on to this.

It includes another $60 billion for clean energy manufacturing across solar, wind, nuclear, and hydrogen power, as well as electric vehicle (EV) factories.

It also provides funding for technology investments across the supply chain. That includes incentives for the sourcing and production of the U.S. materials needed for the energy transition.

Altogether, these are some of the areas the Act covers:

The IRA also includes tax credits and rebates. Those will be across a wide spectrum of New Energy materials, manufacturing, and power.

That includes tax credits for:

What This Means for Wall Street

The IRA was well received across the country by industry insiders that create the energy that powers our homes today and that will produce it for tomorrow.

There was no shortage of applause for the New Energy money and attention from the Inflation Reduction Act. It spanned a variety of private companies and trade groups around the country.

That’s because it touches a variety of alternative energy businesses – from solar to wind to nuclear.

And these are areas involved in the energy transition away from fossil fuels, even while fossil fuels remain the dominant power source. 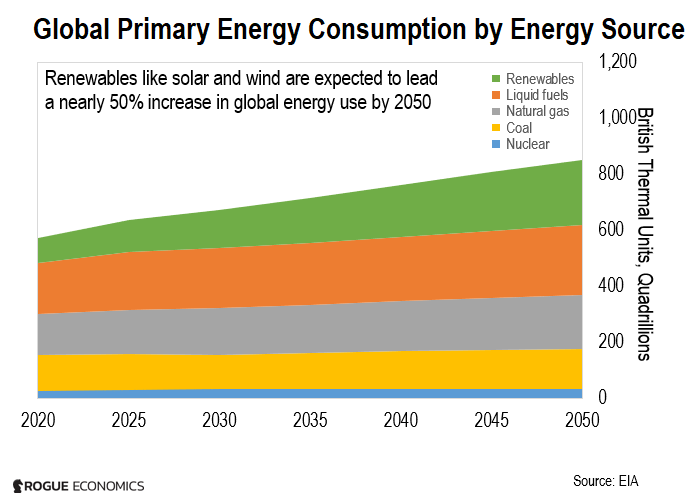 Rising inflation and global instability have put America’s energy security in jeopardy. A federal clean energy investment of this magnitude is our best defense.

The Advanced Energy Economy is a national trade association of clean energy buyers and businesses.

And that wasn’t all. The wind sector also chimed in.

The Business Network for Offshore Wind (BNOW) was thrilled about the funds allocated for offshore wind development projects. Its CEO, Liz Burdock, said:

The bill’s $40 billion investment in domestic clean energy manufacturing and shipbuilding is an important down payment that will unleash the vast potential of offshore wind.

And to top it off, Zach Friedman – Director of Federal Policy at Ceres – said:

Ceres is one of the most influential nonprofits on corporate governance.

All of this is why companies in the New Energy space were so happy that the Act passed.

Shares of New Energy and material companies rallied last week, after the Senate approved of the Inflation Reduction Act. This pattern continued after the House passed the IRA.

Solar, EV, fuel cell and materials companies all benefited from investor enthusiasm. Just take a look at this example below. 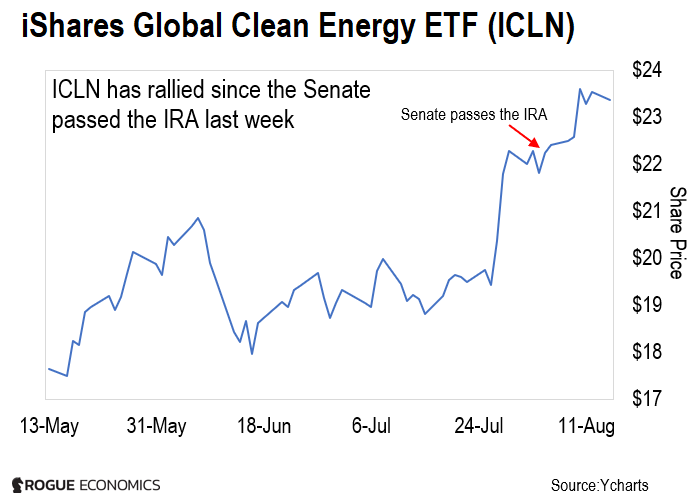 And I expect that to continue in the months and years ahead. So how do you take advantage of this?

One of the best ways to capture broad upside right now is the iShares Global Clean Energy ETF (ICLN).

It holds close to 100 clean energy companies across different industries – including utilities, industrials, and information technology (IT).

Regular readers may recognize this ETF. We first put it on your radar in the June 7 Inside Wall Street.

If you didn’t get in, now is an excellent time. It is also a great time to increase your investment if you’re already participating.

P.S. As I mentioned above, the Inflation Reduction Act won’t play a huge role in reducing inflation in the short run… But it will light a fire under the energy transition.

Companies with domestic sourcing – or that are involved in the New Energy power or manufacturing space – will see the most upside. And at my Distortion Report advisory, my team and I are following the money to find those companies for you.

In fact, I just put my boots on the ground – to check out the first gas station in America to no longer pump gasoline. And what I found out could have huge implications for your portfolio. You could potentially double, even triple, your money over the next 12 months. To learn more, don’t miss this video report I put together for you.