One Inside Wall Street reader, Christopher H., took it even further. He wrote in, saying Bernanke “should be awarded a jail sentence, not the Nobel prize.”

Under Bernanke’s leadership, the Federal Reserve took it upon itself to become the lender of last resort – on steroids.

As a result, the Fed more than doubled the size of its balance sheet through asset purchases between 2008 and 2010.

But, more importantly, Bernanke’s Fed set a precedent… lots of money, no responsibility.

Let me show you what I mean by that, and the implications for your money today.

In 2010, Congressman Ron Paul asked Bernanke whether he would ever shrink the Fed’s balance sheet again.

Bernanke replied that he would bring the balance sheet back to under $1 trillion.

The Fed’s balance sheet had already grown to about $2.3 trillion by that time. And it never came down during the rest of Bernanke’s time as Fed chief.

Fast forward to 2020, when Covid-19 slammed the world, and governments panicked. The Fed cut short-term interest rates back to zero and pumped money into the financial system.

The aggressive intervention – along with massive government spending – stemmed from policies Bernanke put in place.

If we look further back, to 2008, the Fed’s total assets have increased nearly 10x since then. You can see this in the chart below… 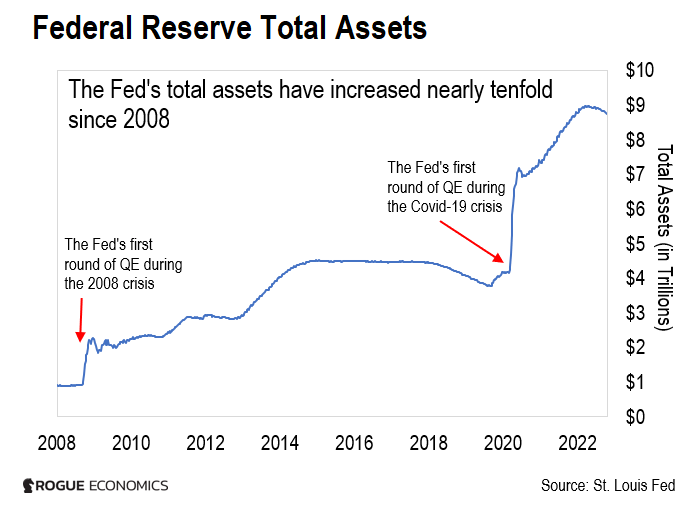 Even with the Fed shrinking its balance sheet a little bit this year, it’s still close to $9 trillion.

Meanwhile, inflation is now close to 40-year highs. So the Fed has been scrambling to raise rates to bring down inflation.

But now, we are seeing what happens when the Fed slams the breaks on its monetary stimulus. Stocks are selling off, and so are bonds.

The markets have become addicted to all forms of Fed stimulus, low rates, and QE. When any of these are disrupted, markets exhibit more volatility, and they sell off.

With higher interest rates, borrowing becomes harder and costlier for consumers. Same goes for businesses, which then pass on those higher costs to consumers.

And so as debt becomes more expensive, at the end of the month, many Americans have less left over.

Despite this, as I’ve written here and said publicly, the Fed can’t do anything about some of the major causes of that inflation – fuel and food.

Here’s the bottom line. These actions are coming at a steep cost to American people… all because of things Bernanke had a major role in creating and cheerleading.

So, what are the investment implications in light of what the Fed is doing today?

As I write, the assumption is that the Fed will keep “taking forceful and rapid steps” to fight inflation, as current Fed chief Jerome Powell put it.

But I still believe the Fed will have to start pivoting soon, beginning with smaller rate hikes.

As you may recall, the Fed had already signaled it might return to a more dovish stance sooner than the markets expected.

The reason why that hasn’t happened yet is because the recent U.S. monthly inflation numbers came in at 8.2%. (That was higher than the expected 8.1%.)

But with the S&P 500 already down about 22% year to date, the Fed is bound to start easing off on its “War on Inflation,” despite all the tough talk.

And we already have a precedent for this from across the Atlantic.

On September 23, the BoE announced it would begin purchasing U.K. government bonds to stabilize its bond market.

The move came just days before the central bank was set to begin quantitative tightening policies. Instead, it did a 180 and started quantitative easing… again.

Much like the Fed, the BoE had been hiking interest rates in hopes of taming out-of-control inflation.

But then it ran into issues in the foreign exchange markets… and potential solvency issues with U.K. pensions, caused by plunging bond values. This forced the Bank of England to flip.

Right now, the Fed may have more wiggle room than the Bank of England. But it will have to face the music eventually.

Consider this: At writing, U.S. federal debt stands at about $31 trillion. It costs $678 billion to maintain the debt. That’s 13% of the total federal spending. And it’s about $57 billion a month.

If the Fed keeps hiking rates aggressively, the interest payments alone will put the government in the poorhouse.

Bottom line: Sooner or later, the Fed will flip.

In the meantime, we can expect some choppy action as the markets try to figure out what it will do next.