And the Federal Reserve has made it clear that it’s serious about fighting it. 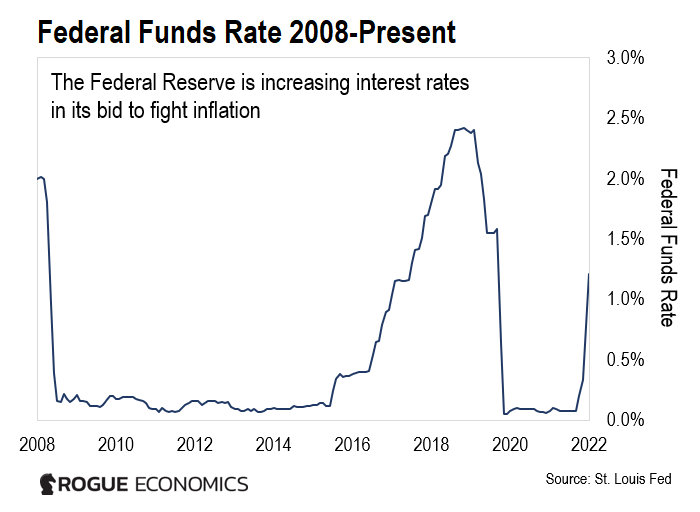 But inflation has been fighting back.

As I wrote to you last week, June’s Consumer Price Index (CPI) jumped by 9.1% on a year-over-year basis. That puts it at a four-decade high.

So today, in the first of a two-part essay series on the Fed’s misguided battle against inflation, I’ll take a closer look under the hood at those latest CPI figures…

And tomorrow, I’ll explore the options open to the Fed… I’ll also show you how you can play the current market volatility around the inflation battle to your advantage.

So, what are the latest CPI figures telling us?

Looking first at the cost of food and energy…

It also includes a 7.7% rise in the price of food away from home, the largest 12-month change since November 1981.

Next, energy… The energy index went up 7.5% in June. That’s nearly double its 3.9% increase in May. Overall, energy prices are up 41.6% over the last twelve months.

Electricity prices rose 1.7% in June. And they are up 13.7% over the last year, the biggest one-year increase since April 2006.

The price of gasoline rose by 11.2% in June. That was nearly three times more than the 4.1% increase in May.

This next chart shows the food and energy inflation story in a nutshell. 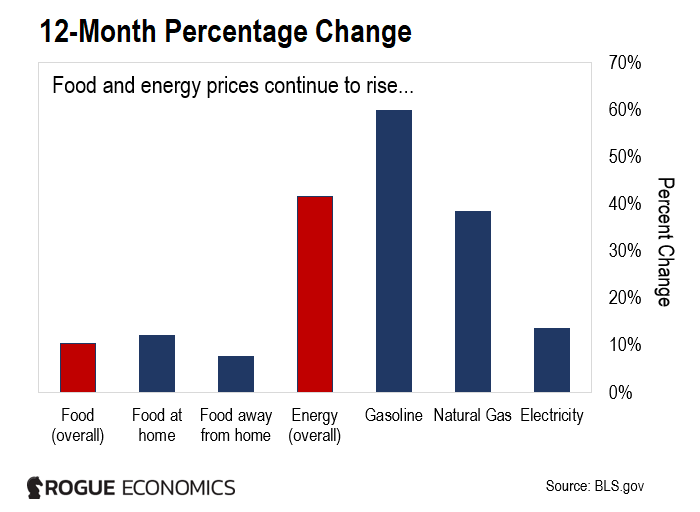 Rent Going Up at Fastest Pace Since 1986

Core CPI, which excludes food and energy prices, increased by 5.9% in the 12 months through June.

This was slightly less than the 6.0% increase in May. But economists had expected a bigger drop.

One key area driving the increase is shelter…

Then there’s the part of the CPI called the Owners’ Equivalent Rent (or OER). It measures what it would cost a property owner to rent a similar place.

You see, people that had wanted to buy homes when interest rates were lower now don’t want to pay the higher interest on their mortgages. Or they can’t afford to. They’re choosing to rent instead.

However, the more people looking to rent, the more homeowners will charge. This includes hedge funds and private equity funds that hoovered up homes during the years of cheap money during the onset of the Great Distortion between the markets and the real economy.

The truth is rents never really go down for residential renters anyway. You can see that in this next chart… 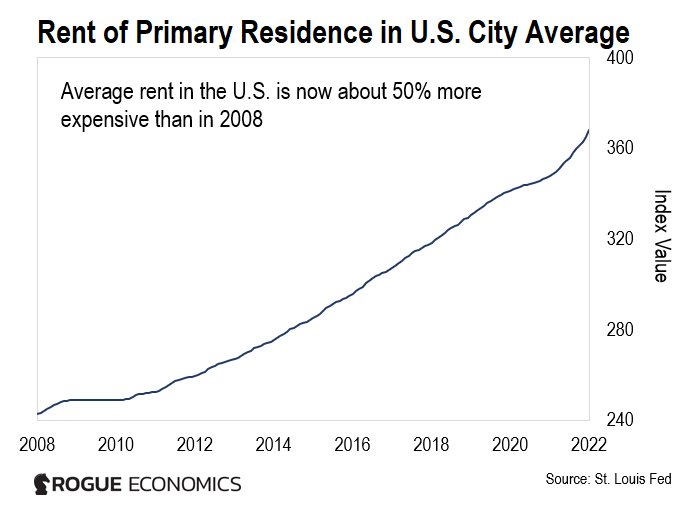 As a result, the shelter part of the CPI is likely to remain high.

Rounding out the inflation picture for June, used car prices, which had been forecast to drop, instead rose 1.6% for the month. They’re up 7.1% over the last year.

President Biden, facing shockingly low approval ratings for his handling of the economy, had something to say about all of this.

Speaking during his visit to the Middle East, he issued an immediate press release in response to the latest inflation figures

He wanted to make it clear that the CPI was registering a higher inflation number than the reality.

He said, “Today’s data does not reflect the full impact of nearly 30 days of decreases in gas prices, that have reduced the price at the pump by about 40 cents since mid-June.”

And it’s true that gas prices have come down somewhat since the data was compiled.

Biden also said that he’ll give the Fed “room” to fight inflation. It’s not supposed to be his job to dictate what the Fed does, but – okay.

The upshot was that President Biden’s support for the Fed’s hawkish stance, in addition to the CPI figures themselves, caused the market to raise its expectations of a 1% rate hike at the Fed’s meeting next week (July 26-27).

Investors now believe there is a 33% chance this will happen.

If it does, it would be the biggest increase in U.S. interest rates since 1980.

So the latest inflation figures didn’t give us much to smile about.

However you look at it, all of these numbers are causing real pain to real families across the country and around the world.

And the turmoil as a result of all the speculation about the Fed’s next steps is also causing pain to investors.

So tomorrow, I’ll explore the choices available to the Fed right now to fight this spiraling inflation…

And I’ll share my playbook for how to play the current market volatility to your advantage.