David is a professional geologist. And he has been investing in commodities for decades.

Below, he shares an important update on one commodity Nomi has been telling us is crucial in the global shift to cleaner energy. David believes this news could be a great sign for America’s mining renaissance…

The copper price took a drop in recent weeks.

Copper has fallen 15% on the London Metal Exchange since the beginning of June.

That has dragged down copper stocks. The Global X Copper Miners ETF (COPX) is down 24%.

On a recent visit to Ireland, I met with one of the world’s top copper geologists.

He told me he’s busier than ever. He’s got major mining clients scouring the world for new sources of copper.

That jives with what I’ve seen in my recent travels. Around the world, big money is still frantically searching for tech metals.

In Uzbekistan earlier this year, I met several groups looking for the red metal.

I visited a massive open-pit copper mine there. A few weeks ago, I got laboratory results back for some rock samples I took.

They confirmed this area of Uzbekistan holds major riches of copper. It’s easy to see why big investors are circling.

But we don’t have to go around the world to find copper.

There’s plenty waiting to be discovered and developed right here in America.

A Major Copper Mine Just Got Approved in Arizona

This week, one major copper project got a go-ahead. That’s the Resolution mine in Arizona.

Resolution has been in the works for years. It’s being developed by major international mining firm Rio Tinto.

In 2014, the Obama government agreed to give Rio Tinto federal land to build the project.

But recently, local native groups sued to block the land transfer. They argued the land had cultural importance and shouldn’t be offered for mining.

This week, a San Francisco court ruled on the case. It upheld the land transfer in a 2-1 decision.

This removes an obstacle to developing a major new U.S. source of copper. That could be a very big deal.

That’s a testament to how much copper we have here at home.

Back in the 1960s, America was a premier supplier of copper. Mines in Arizona, Utah, and New Mexico gave us a world-leading position in this hard tech. 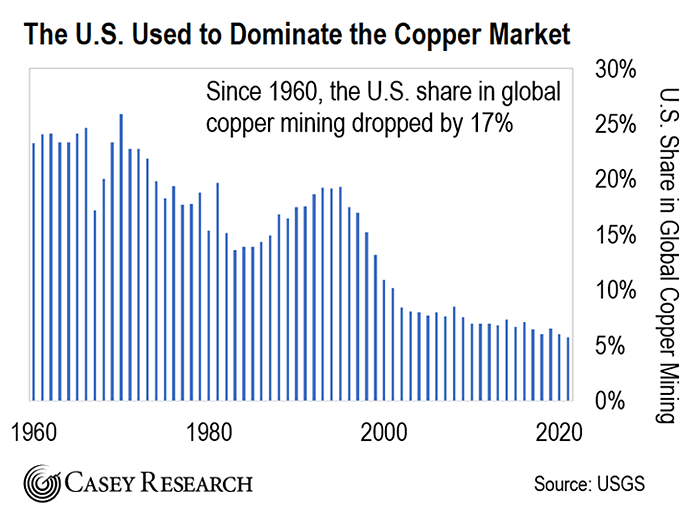 Since then, U.S. copper mining has been in decline. The rocks haven’t changed. But local attitudes toward mining have.

Strong opposition to mining blossomed in Arizona. Lawsuits became common, like the recent move to block the Resolution mine.

That’s starting to change. In recent years, big mining companies grew tired of government issues in copper-mining countries like Peru and Chile. There’s been a return to North America.

If Resolution goes ahead, it would be a sign that resurgence is gaining steam.

It’s not certain. Other major copper projects in America have hit snags recently. The Twin Metals mine in Minnesota, for example, has been stalled by government intervention.

Plus, President Biden’s helped little in forging a path. On the one hand, he’s talked about America’s need for critical metals. On the other, he’s allowed his administration to block or hinder major projects.

That waffling grew worse when Biden said he’d like to get metals from our neighbors. He singled out Canada, Australia, and Brazil as sources of supply.

Divisions over the issue grow stronger by the day. Recently, other lawmakers introduced measures to support domestic mining of rare earths. A new policy last month called for funding to support new uranium mines in America.

There’s a huge appetite for made-at-home mines. But will regulators allow them to be built?

This week’s decision on Resolution gives some hope. The mine still has a long way to go until construction.

But if it can advance, it would be a great sign for America’s mining renaissance.

That would open big investment opportunities across the country. We’ve got plenty of deposits waiting to be developed. The companies that do so could be the economic leaders of the coming years.

P.S. Copper and other tech metals are major components of electric vehicles (EVs). They’re essential for making the EV boom – one of the biggest transformations of our time – possible. To learn how to profit from this massive trend, click here.