We’re glad to see it.

We’re tired of whiny, snively politicians – on this hand… on that hand… equivocating… backtracking… double-talking.

It’s good to see a man in office who is not afraid to stand by his positions, no matter how absurd and lunatic they are.

Meanwhile, word this morning is that crony insider Gary Cohn is leaving the White House… along with conservatives, free-traders, and the Old Republicans.

We’ll come back to that in a minute…

First, an update from the ranch.

To fill in new readers, there’s a battle going on here in Argentina between property owners and people who claim to represent indigenous tribes – even some that may have disappeared before the conquistadors arrived.

They call themselves originarios… and claim the land is theirs because it was where their ancestors once lived.

There have been court fights and demonstrations… property has been seized… houses have been burnt… and there have even been a few murders.

We got an update on the local situation yesterday from our foreman, Gustavo.

“Everything is calm now,” he began. “We went up to fix the road, but they told us to stop. They didn’t want it fixed. So we let it go.

“[The ranch owner next-door] got into a real fight with the originarios on his place. They threw rocks at him. The police were up there for days. They barricaded the road to keep troublemakers out.

We tried to make a deal with them last year. Gustavo and our lawyer rode up to try to work out a win-win deal.

“No, it just isn’t possible,” explained Gustavo. “You own this land. They think they own it. There’s no way to compromise on that.”

Yep… some deals are win-lose, Dear Reader. Nothing you can do about it.

“If you put sheep up in the high pasture, I think it will set them off,” Gustavo continued.

“Yes, but it’s the principle of the thing. They’ll think they can get away with stealing the land from us.”

“Well, maybe they can. Some battles are not worth fighting, especially when you’ll probably lose.”

Meanwhile, Harley-Davidson came forward and explained to the president why a trade war is a losing proposition. Bloomberg:

The motorcycle maker is warning that Trump’s tariffs on steel and aluminum could drive up costs. European leaders’ threats of retaliation – which have specifically called out the iconic American company – also risk hurting sales overseas.

In other words, Trump’s trade tariffs will hurt the very heartland industries he pledged to help.

Harley-Davidson, and every other decent business, is forced to compete in a win-win world – by satisfying customers every day.

Nobody’s gotta buy a Harley. Raise the price, or simply do something that sours buyers on the American brand, and they stop buying. Already, Harley sales are falling all over the world.

Business leaders are neither heroes nor angels; like the rest of us, they are subject to influence. Give them the opportunity and they’d much prefer “protection” to competing honestly.

But protection is among the worst things you can give to a business; you may as well tell your children not to bother with their homework.

Unless you’re under intense competitive pressure, and it becomes a question of the survival of the business to do it, you’re just going to lapse back into your old ways. There’s no other answer.

But Mr. Trump thinks he has another answer. He spelled it out in his books. Hardly a single one of his tweets fails to mention it. He thinks you win by making someone else lose.

Only one person wins the Oval Office at a time. One party wins; the other loses. It’s either red or blue. One faction of Deep State insiders gains control of the government; others lose it.

In these things – and in most of life – you win by letting the other guy win, too.

MARKET INSIGHT: WHAT THE BUFFETT INDICATOR SAYS ABOUT STOCKS

The “Buffett Indicator” is flashing a warning…

Back in 2001, super investor Warren Buffett told Fortune magazine that “probably the single best measure of where valuations stand at any moment” was to look at where stock valuations are relative to the size of the economy.

If the total market value of stocks is low relative to the overall economy, that’s good news for investors.

If the market value of stocks is high relative to the economy, it’s a warning sign.

That’s why today’s chart is so important… 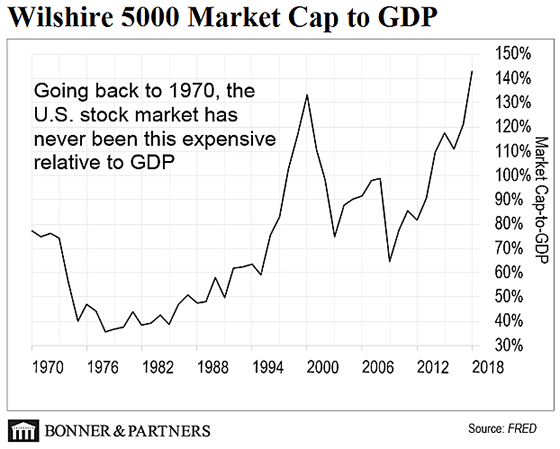 The Wilshire 5000 Index tracks the performance of the nearly 3,500 biggest stocks trading in the U.S.

As you can see, its market value has never been so high relative to the size of the economy going back to 1970.

What Investors Are Saying About Cohn’s Resignation
Crony insider Gary Cohn has resigned as President Trump’s chief economic advisor. Here’s what market players are saying about the move and what it means for stocks.

How the U.S. Squandered Its Steel Superiority
It wasn’t global trade that hurt the U.S. steel industry. But it’s a problem rooted in disastrous decisions made by the steel companies when Trump was still in elementary school.

How Genetic Editing Will Cure Disease
There are more than 6,000 genetic diseases out there. About 3% to 4% of all babies will be born with a genetic disease or major birth defect. But now there is a strange “editing” cure that will change all that.

I am an old rancher from Wyoming. I have ranched tough country like what you have. Everything Lucas is telling you will get you more cattle and more pounds of cattle. But that does not mean more profit. It just means you handle more cattle. That’s more money going both ways, in and out. But it sure is a great lifestyle. Best of luck.

So happy for you that it has rained and that you seem to have a man that can get it done. No more sand-fed beef for the immediate future. It sounds great and the tide may have turned. Good luck and God bless and hat tip for your determination.

What an ideal existence, Bill. I hope the children carry on your meager beginnings for many generations. You are rich in innumerable ways beyond the material. I envy you, sir.

As usual, you are lying again. Trade tariffs are exactly what is needed to Make America Great Again. They will increase our trade surplus to over $1 trillion. I have been reading all your publications for five years now, and I have concluded that you are part of the Establishment.

I always enjoy watching you make a fool of yourself critiquing The Donald. Do you see any tariffs? Has the U.S. bombed the stuff out of North Korea? The Donald wraps you around his little finger, and you fall for it, just like the idiots in the press.

Continuing trade deficits in the range of $800 billion annually will make America poor! It will make our trading partners greater! That is for certain! Wake up, my friend!

That’s the message from Crisis Investing editor Nick Giambruno. But Nick says it wouldn’t be a conventional attack. It would be something nobody is expecting… Read the full story here. 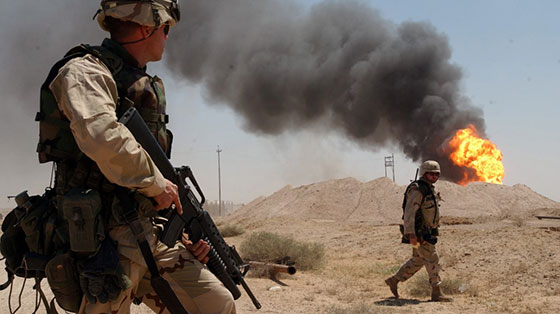