Editor’s Note: Today, we turn to our weekend guest editor, Crisis Investing’s Nick Giambruno. Below, Nick shows why President Trump’s defining legacy likely won’t be an infrastructure boom or The Wall. It will be bringing legal pot to America.

Legal pot is a bit out of our wheelhouse here at the Diary. As Bill often says, his usual beat is money. But cannabis is now legal nationwide in Canada. It is expected to be lawful in Mexico starting this year. And a majority of Americans now favor legal pot. With all these forces converging, this is a trend that should be on every investor’s radar.

Longtime Diary readers know that I closely follow the legal cannabis market. For newer readers, just know that I’ve dedicated hundreds of man hours to investigating this new market. And all of my research is pointing to one conclusion: Cannabis will be legal nationwide, likely before the end of President Trump’s term.

Back in August, I showed you why a stepping stone to that outcome would likely be the Mitch McConnell-backed “Farm Bill.” The bill, among other things, would legalize industrial hemp in the United States.

[Hemp is a strain of cannabis that is rich in the chemical CBD but low in THC (the compound that gets you “high”). For a full update, go here.]

At the time, I wrote…

The [Farm Bill] passed the Senate in late June in a landslide 86-11 vote. It still needs to pass the House – and President Trump needs to sign it – before it becomes law. Both are likely to happen within a matter of weeks.

I’m writing to you today to report that President Trump signed the 2018 Farm Bill into law on December 20. Industrial hemp is now legal at the federal level for the first time in over 70 years.

Now that President Trump has legalized hemp at the federal level, the floodgates have opened for hemp production – as well as CBD oil extraction – on a massive industrial scale in the U.S.

Today, I want to show you why I believe the president will take things a step further. I’m confident that Trump will fully legalize cannabis nationwide, likely before the end of this year.

You see, on October 17, 2018, Canada made history when it became the first large, industrialized, Western nation to legalize recreational marijuana.

This puts Canada at the forefront of the global marijuana industry. Canada could be to cannabis what France is to wine. But it has implications for the U.S. industry, too…

“America First” is more than a political slogan. Trump and his supporters sincerely believe in this. This mindset will be a critical factor in Trump legalizing cannabis.

But right now, that’s exactly what’s happening. Canada is getting an important head start in the global cannabis industry.

I’ll explain why in a moment. But first, let me show you why the U.S. could follow in Canada’s footsteps in the near future…

If Trump is serious about putting America First – and I think he is – he’ll legalize cannabis.

But he won’t be able to do that overnight. The Deep State swamp creatures that make a living off the War on (some) Drugs are legion.

Even though they are fighting a losing battle, it will take time to overcome the interests they have entrenched themselves in over generations. But I expect Trump will be able to overcome this.

There’s already been more progress in that direction during his time in office than all the previous post-prohibition U.S. presidents before him made combined.

For example, in June 2018, the Food and Drug Administration (FDA) approved a prescription cannabis medicine for the first time. That drug is called Epidiolex. It is used to treat severe, childhood-onset epilepsy.

Prior to this, the feds’ official stance was that cannabis had “no accepted medical use.” The approval of Epidiolex cracked the door wide open for further cannabis research and cannabis-based drugs.

In other words, up until last September, the DEA considered cannabis and all cannabis derivatives to be in the same category as heroin and LSD, and more dangerous than cocaine and meth.

The Epidiolex classification has changed the DEA’s absurd view on cannabis derivatives. I expect this decision to open the door to further favorable changes.

Despite these achievements, full legalization in the U.S. isn’t going to happen overnight.

But we can’t sit on our hands waiting for this inevitability when there are some outstanding opportunities just north of the border.

In the meantime, Canada will be the premier place to profit from this explosive new industry.

Aside from the Canadian market itself, Canada is already a legal cannabis export powerhouse. It’s about the only country that currently exports cannabis on an industrial scale.

Numerous countries allow for medicinal cannabis, but are constrained in producing it. Leading Canadian companies have already set up partnerships and joint ventures in Brazil, Germany, Australia, and other countries.

A Canadian company even secured approval from the DEA to supply cannabis extracts to researchers in the U.S., who are federally prohibited from receiving it from domestic sources.

You also have to consider cannabis oil. The Canadian government started issuing export permits in early 2016. By 2017, exports of Canadian cannabis oil had roughly quadrupled, as you can see in the chart below. 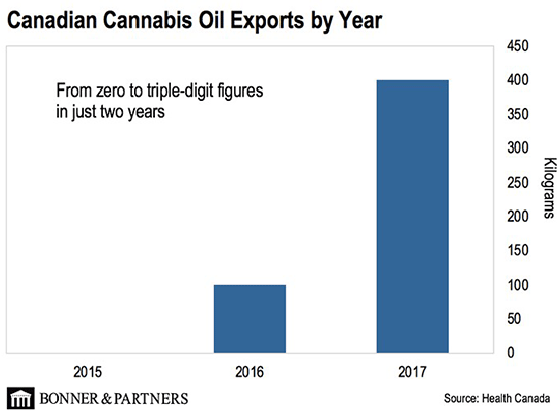 This first-mover advantage in global markets has given Canadian companies a tremendous head start on their competitors.

When you consider the immense medical, recreational, industrial, therapeutic, and accessory markets for cannabis, the implications are clear.

Legal cannabis will create countless new categories of products. These combined markets will easily be worth hundreds of billions of dollars in the years ahead.

It’s hard to wrap your mind around the impact legal cannabis will have on the world. It’s an unprecedented situation.

I’ve covered the parallels between cannabis prohibition now and U.S. alcohol Prohibition in the 1920s and 1930s with my readers in the past.

But as cannabis legalization spreads, it will be orders of magnitude more profound than the repeal of Prohibition in 1933.

Alcohol use was largely just a recreational market. With cannabis, there is much, much more potential than that.

Legal cannabis is going to disrupt the alcohol, tobacco, pharmaceutical, and soft drink industries, among others.

Add in the illicit recreational market – reputedly worth $200 billion globally – that will become a new legal market, and we’re talking about a megatrend that could disrupt over $500 billion in global markets, according to the CEO of one of our top recommended marijuana companies at Crisis Investing.

Considering where we are today, it seems to me that the legal cannabis megatrend is closer to its beginning than its end. It will make investors in the right companies rich in the process, too.

Of course, it will be years before the various cannabis sub-industries – including recreational, medical, industrial, therapeutic, and accessory – are fully developed.

But that just means that, today, we have the chance to buy the future Coca-Cola and Philip Morris of cannabis before they emerge as industry dominators.

Now is the perfect time to bet on Canadian marijuana producers.

Remember, it won’t be a straight shot upwards. There will be downturns. As always, it’s a good idea to keep your position sizes small and take some profits along the way.

This way, you can capture the gains on the way up without exposing yourself to huge losses.

P.S. The legal marijuana market is one of the biggest ground-floor investment opportunities I’ve seen in my career. But as Bill correctly stated, not every single cannabis company will be a success. Some will go bust. That’s why it’s important to only target the most fundamentally solid companies with the highest investment potential.

I’ve spent the last year and a half building a portfolio of 11 best-in-class legal cannabis companies for my Crisis Investing readers. You can access these names – and all of my research on the sector – with a subscription to Crisis Investing. Go here to learn more.