BALTIMORE – Yesterday, we saw the soul of America.

We drove by a house so imposing… so monstrously ugly… so laughably pretentious that we almost drove off the road staring at it.

On a suburban lot, it was as though it had fallen off the delivery truck and rolled into place, with no thought as to its surroundings.

It was a fake mansion!

Yes, dear reader, it is all fake – our money, our economy, our markets, our government… even our mansions.

That’s more money in one day than we made during our first 10 years of work – combined.

Our coins, formerly worth nothing, are now worth more and more.

We toiled not, neither did we spin. We invented not. We earned not. Not a single morning did we get up at the crack of dawn to earn that money… nor a single night did we stay up late studying to make it happen.

Instead, it was as though we had walked through a casino and randomly yanked on one of the one-armed bandits. Ka-ching!

Nor did we learn anything… except that it’s a mad, mad, mad, mad, mad world – which we already knew! And if Civilization author Clive Bell is right, this is the best kind of money. We didn’t distract ourselves from “thinking and feeling.” We have no coal dust under our fingernails… and no hands calloused by years of hard work.

What to make of it? Is bitcoin money fake, too?

Tomorrow, we’ll have a report directly from our in-house expert, who is attending a conference on cryptocurrencies this week. More than 1,700 people paid $1,500 each to attend, representing the “smart money,” including a handful of newly minted millionaires still with adolescent pimples on their faces and bitcoins in their electronic wallets.

Meanwhile, here’s a thought… and a feeling. We invite dear readers to print this out and put it on their refrigerators:

Bitcoin is not an investment. It is not a speculation. It may or may not be a durable form of money; time will tell.

You may make a lot of money in the bitcoin bubble. Or lose it. Either way, don’t take it seriously. You should treat it like a dollar bill on the sidewalk. If you are lucky, you will pick it up before it blows away. If you are unlucky, you will chase it into the busy street and be struck by a crosstown bus.

Easy come, easy go – like an uninvited relative. Neither celebrate its coming… nor shed a tear at its departure.

What good is such money?

Coat on a Stick

Most of the world is so caught up in getting and spending money that it hardly has time to notice the leaves.

And maybe it is better off for it.

A man puts his head down… he keeps his eye on the ball and his shoulder to the wheel… and he’s ready to make money. Or war.

And then, by the time his hair whitens and he retires from making money, it is too late. His sclerotic brain can learn no more new tricks. It has no flexibility… and no time to develop real taste and judgement.

That’s why the “self-made man” may be the least civilized of the species.

He is too busy to think and feel. He is getting rich in his youth. And then, when he is spending… that’s where the disaster of his life becomes apparent.

He has not taken the time to prepare himself. He cannot appreciate style… or wit… or charm… or intimacy.

In retirement, when he can no longer do the only thing he knows how to do – make money – he is nothing more than a coat on a stick rambling around a house far too big for him, a laughingstock to the young… an embarrassment to the old.

You can judge for yourself: Architectural Digest offers a list of “The Most Beautiful Home for Sale in Every State in America.”

Actually, it is just a list of houses for sale. Those that make the list are the most expensive ones. That is, for the most part, they are the houses of rich, “successful” people who have since gotten a divorce or otherwise moved on and now need to sell their dream homes.

Gaudy, bombastic, clumsy, awkward, hollow, appalling monstrosities. And they are all over America.

A Greek column here… an Italianate arch there… an English gable over the four-car garage… and a Versailles kitchen – they are an amalgam of hodgepodge.

We have been offended by McMansions for years. But the houses of the rich… these are what McMansions aspire to be. They are what you get when you put a hack architect together with a rich man. Neither of them has the sense of style, modesty, proportion, or charm you need to create a beautiful dwelling.

They’ve both been too busy earning and spending money; neither really knows how to build a home with grace or wit. All they can do is build a big, expensive one: a fake mansion.

What you get is a $16 million pile in Arizona and a huge palace for $45 million in Santa Barbara. One rich man builds; another buys. They advertise their wealth and bad taste simultaneously.

And here we see the whole flimflam exposed. These are the houses of the richest and most successful people in the country. They should proudly exhibit the finest that the “One Percent” can buy – the careful aesthetic judgment of the elite… the well-honed vernacular architecture of the world’s greatest empire at the peak of its power.

Instead, they are pathetic imposters. Too large to be livable. Too empty and monumental to be cozy. Too many angles… too many features… too much marble and stone – they are a “hormegeddon” to the domestic housing market. (See our book on the subject.)

They show not only the shallowness of its leading citizens, but also the emptiness of a late, degenerate, bubble-financed empire.

But it’s small potatoes compared with the rise in the combined market value of the other 1,318 cryptos in existence. 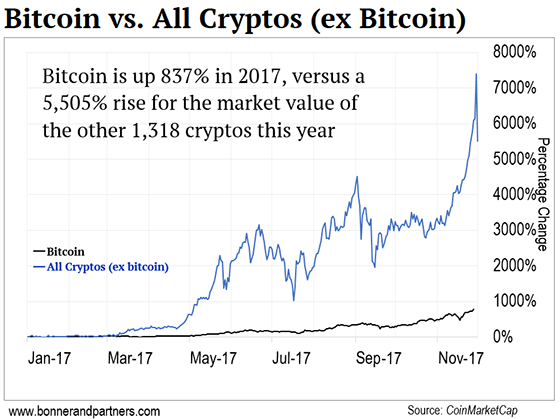 As you can see from today’s chart, the combined market value of those other cryptos is up 5,505% year-to-date.

That’s 6.5 times the rise in the market value of bitcoin.

Bitcoin’s Newest Challenge: The U.S. Government
As Bill mentioned above, bitcoin is going stratospheric. And that’s caught the attention of the Internal Revenue Service. On Wednesday, the IRS commanded the popular cryptocurrency exchange Coinbase to hand over information on thousands of its users.

The Technology That Will Rewrite Medicine
One piece of technology is poised to transform how we think about healthcare. Bill’s top technology analyst Jeff Brown shows precisely what it is, and how investors can start profiting today.

The Dollar Has Gained Nearly 3000% in Venezuela
Venezuela is in crisis. The Venezuelan economy is in free fall as inflation runs wild. And on the black market, the U.S. dollar has gained nearly 3000% this year alone.

In the mailbag, readers consider what money is good for. Status? Comfort? Or something else?

I could not care less about money providing status, nor could most of the people I know. I care very much about comfort. And there are a great many working poor who cannot afford to keep a roof overhead and who do not even have a place for an “open fire” or a place to grow a garden as well as pay utility bills and buy food and medical care. It seems pretty cavalier to assume these basic “comforts” are so easily acquired or that they are unimportant.

What’s up with the old Chevy pickup? In the past, you’ve always referenced your old Ford pickup. Kind of like the Beatles and Elvis, you can like both but you prefer one. Which is it? Oh, and you left out the best thing money can do for you – it gives you freedom. Surprised you missed that as you seem to experience that benefit to the max. Really enjoy your Diary.

What an honest valuation of the good of money… I live high in the mountains of a third world country you recently visited. I drive a used pickup, own an antique Land Cruiser, and find the greatest joy soaking in my warm bathtub or just sitting by my bonfire early in the morning.

I do frequent a gym in a nearby city and sit with a coffee and lemon pie afterwards, five days a week at a local restaurant. These are my simple joys! Like you, I experienced the opulent life and I lost it all… not quite, but nearly. Thanks for your letter… You feel like an old friend… You’re welcome by my fireside anytime.

And Bill, if it wasn’t for your work over the years, I most certainly would have lost everything. Thanks for being you!

Meanwhile, conversation turns to the dismal state of politics…

I don’t get it. Why is anyone supporting Roy Moore? Even if it’s too hard to believe he’s a sexual predator, at least recognize that he’s a liar and thief. For example, not once, but twice he swore to uphold the laws of the land. One prominent law separates church from state. And not once, but twice, he flagrantly lied under oath and, for doing so, was each time removed from office, twice robbing the citizens of his state of the services they elected him to render. His lying and thieving are also contrary to the religious beliefs he ostensibly puts foremost.

It is as if our politicians, once they get in, become gutless after being given their PC orders. It’s enough to make a good man cynical, throw his or her hands in the air, and fall in line, more or less.

Bitcoin is skyrocketing. But Bill’s top technology expert, Jeff Brown, says that 99% of investors are missing the real story…

It’s the technology behind bitcoin, not the cryptocurrency itself, that will change the world. And Jeff’s found a way for readers to invest in blockchain technology without purchasing a single bitcoin. Read more here. 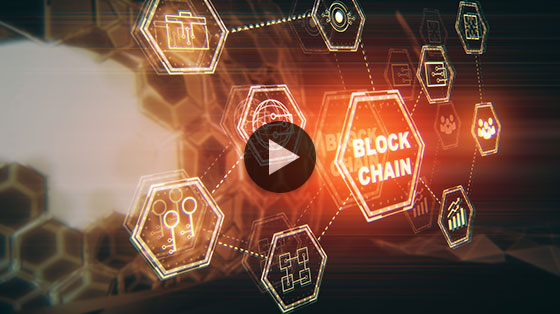