BALTIMORE, Maryland – Is there any smarter group of Homo sapiens on the planet? Or in all of history?

Not only did they avoid another Great Depression by bold absurdity… giving the economy more of the one thing of which it clearly had too much – debt. They also carefully monitored the economy’s progress so as to avoid any backsliding into normalcy.

And where do we get this penetrating appraisal? From the Fed economists themselves, of course. Bloomberg:

“By maintaining the federal funds rate lower, the FOMC managed to substantially offset the effect of tightening financial conditions on the economy,” the authors, referring to the rate-setting Federal Open Market Committee, wrote in a blog post on the bank’s website on Wednesday.

They’re geniuses. No doubt about it. That’s why they’re in charge and we’re not. They’re the elite. They run the Deep State. They may not pay the piper, but they call the tune anyway.

And good on them! Who knows what prices we might discover if we were left on our own?

One of the endearing features of the ruling classes is their abiding faith in their own judgment. Despite inexhaustible evidence that they are bumbling incompetents, the power elite stick to their guns – literally – and to their cushy sinecures.

We are now seven years into the “recovery” supposedly engineered by the PhDs at the Fed. At a cost variously estimated between $4 trillion and $10 trillion, we have now achieved a growth rate that is about half what it was 40 years ago – before the internet and debt-based money allegedly freed the economy from earthly tethers.

And thanks to these custodians of the public weal, 99% of the families in the USA now have less wealth than they did before the crisis of ’08 began.

But wait… it gets worse.

It is now 45 years since the PhDs took control of America’s money. Over those four and a half decades, how much financial progress do you think the average family has made? Approximately zero.

Yes, the Levy Institute has completed a study. It tells us what we suspected already. Nine out of 10 people in the U.S. have roughly the same real earnings today as they did in the early ’70s. That makes FOUR LOST DECADES, thanks to the feds, with no advance in the material well-being of the American people (aside from technological marvels) since the new money system came on the scene.

Offenses Against Man and God

Meanwhile, the security elite, too, has proven it cannot be trusted to protect a convenience store, let alone the nation. Trillions have been spent… thousands of people have been killed… offenses against man and God have been committed aplenty (in one case, the Pentagon water-boarded the wrong man 89 times in one month).

Perhaps Sanders and Trump are right; maybe it’s time to take a fresh look at the power elite… and how they are running the country. That is the hope that is stirring the voters.

But it’s rousing the Deep State to action, too.
“How to defeat rightwing populism” is a headline in the Deep State newspaper of record, the Financial Times, written by Elitist-in-Chief, Martin Wolf. “How to protect the status quo” is his real challenge.

He readily acknowledges the charges against him and other insiders: “…the greed, incompetence, and irresponsibility of elites.” This has “brought great populist rage,” he admits.

But his prayers are not with the millions of people the power elite has harmed. Instead, his dark hours are tormented by a thought so chilling… so revolting… so unthinkably awful, he cannot sleep. What if, he worries, because of the Deep State’s errors… what if the elite should lose control?

Horrors! “In any country,” he writes, “embrace of the delusions of populism is disturbing.” Yes, especially to the people who caused it!

A Symptom of a Disease

The elite controlled the money, the wars, the policies, and the programs of the last 40 years. It is they who are responsible for $200 trillion of debt worldwide… ISIS… The Bern… and The Donald…

Blame them for ZIRP and NIRP… for $8 trillion worth of income stolen from savers…. for the vulgar rich, flush with cash… for China’s breathtaking growth and its wobbly tower of  debt… for Four Lost Decades… and for America’s longest (and most unwinnable) war.

Mr. Wolf is not concerned about correcting any of these abominations. Instead, he just hopes to manage the problem so the elite stay in control.

Trumpism, he claims, “is a symptom of a disease. We must now find more effective ways to cure it.”

Further Reading: Want to know more about these “abominations” and the  failing credit-addicted system that finances them? In a recent interview, Bill attempts to explain the whole thing.

He reveals how the cronies behind the Deep State may have pushed us to the edge of a financial catastrophe unlike anything anyone alive today has witnessed. And, more importantly, he outlines what you can do to safeguard yourself from the worst of it. Watch Bill’s urgent warning.

Is gold about to take it on the chin?

As the possibility of a Fed rate hike in June increases, the dollar is set to strengthen. And that’s bad news for gold.

Look at this chart comparing gold prices with the U.S. Dollar Index since the beginning of May. 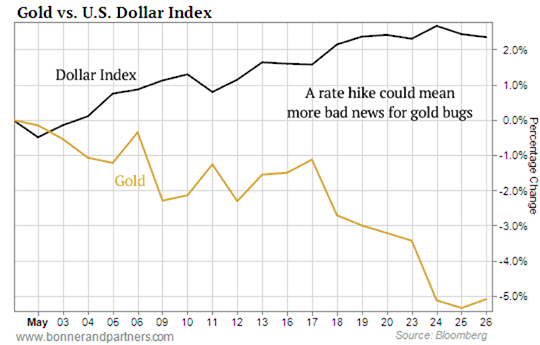 As you can see, the two have been moving inversely to each other.

If the Fed does raise interest rates next month, the dollar should continue strengthening. And that’s likely bad news for the gold bugs out there.

The Only Sector This Billionaire Is Buying
Real estate tycoon Sam Zell is selling the broader market. But there is one sector he is buying right now… Because it’s cheap.

Why Washington’s “Inflation” Numbers Are Wrong…
Washington will have you believe inflation is low. But they exclude the four biggest expenses for middle-class families. Find out what the real inflation numbers are.

The No. 1 Skill of Investing Legends
There’s a simple skill the world’s greatest investors use to create wealth… including Warren Buffett himself. One market expert says that anyone who masters this skill can safely make a fortune in stocks.

Today, in Mailbag… the kudos, comments, and advice pour in for Bill’s youngest son and his chosen area of study.

Congratulations on your son’s graduation with a useful skill. I sympathize with the fact it cost $100K to accomplish that. I graduated from UVM in 1963. My parents sat in the same place you did, listened to the same meaningless and useless diatribe you endured, watched lauds to similar students for one cause or another, and honors to a similar professoriate at an earlier stage of becoming economically irrelevant.

Thanks again for your great work and using some cynicism to advance the cause of humanity despite the UVM chancellor’s dislike of same. You exist in two completely different worlds!

Perceptive, honest, and correct. Your commentary nailed it!

Also, congrats to son for choosing Geology over a long list of worthless alternatives.

How old are you? You have a son graduating from college? I would have thought it would be your grandson graduating.

Geology, untarnished? I’ve been practicing geology for 50 years. There is plenty of tarnishment to be found in the field of geology.

Most geologists are climate changers for example. However, in the field of mining and mineral exploration there is considerably less tarnishment; but one must be careful of those without scruples. The definition of a mine: "A hole in the ground with a liar standing on the rim."

I’m not so cynical. Mining is absolutely essential to societal progress. Everything we consume has to be either grown or mined. No mining and we are back in the dark ages. Good luck to your son.

Bill, your son’s decision to take geology at university was a very positive one, for not only is geology a fascinating science, its exploration sector actually creates entirely New Wealth through the discovery of previously unknown mineral and oil & gas resources.

It also assures him of an exciting lifestyle of travel to many out of the way parts of our globe, as it did for me over a period of some 50+ years of professional involvement.

I wish him well.

Bill, really liked your letter regarding your experience at UVM’s commencement. I was particularly struck by your final comment that you son’s degree was in geology, an as-yet untouched by "claptrap thinking."

As a geologist of over 40 years, the profession has changed a bit, but mostly in a good way. In my retirement, I spend considerable time on college campuses talking to students (and some faculty, many who have "drunk the cool-aid") about careers in the geosciences.

As a group, I find them bright and questioning. Far more so than me and my colleagues did nearly half a century ago.

My mantra to them in all the talks I give is to follow the facts for yourself. Fortunately, many listen and practice that art in the face of an oppressive scholarly environment that surrounds them.

Good on you – and your son. Now just make sure he picks the right graduate program – there’s a science to that too.

Doug Casey and his team just released an urgent broadcast that reveals the single largest threat to your investments right now.

If you hold any stocks, bonds, or bank accounts denominated in U.S. dollars, this message is for you.

Here’s the video – but you should watch it right now because it will go offline this Saturday night. 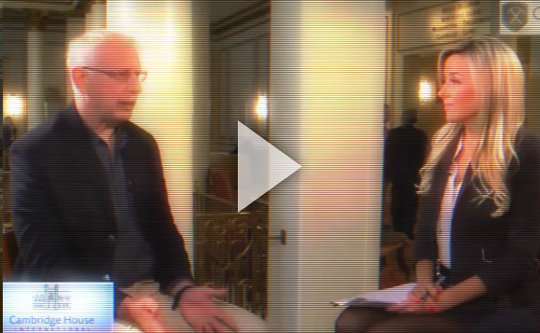