BALTIMORE, MARYLAND – Today will be an interesting day. After falling the last two days, stocks should bounce. And the futures market says they will.

But now, we will see what the speculators are really thinking.

Will they want to go away for a four-day holiday with the stocks they’re holding?

Or will they want to lighten up a little more… just in case?

The combined value of the FAANG stocks – the big tech companies Facebook, Apple, Amazon, Netflix, and Google (Alphabet) – is down by about $1 trillion from its peak. That money disappeared over the last few days. Don’t try to get in touch; it left no forwarding address.

One of the toughest years for financial markets in half a century got appreciably worse Tuesday, with simmering weakness across assets boiling over to leave investors with virtually nowhere to hide.

Stocks buckled for a second day, sending the S&P 500 careening toward a correction. Oil plumbed depths last seen a year ago, while credit markets – recently impervious – showed signs of shaking apart. Bitcoin is in a freefall, while traditional havens like Treasuries, gold, and the yen stood still.

But immobility may be underrated. When stocks are backing up, standing still seems like a good idea.

So far, there’s been no dramatic drawdown… no 1,000-point decline… no “CRASH” headlines… yet.

Nor has anything been corrected. All the imbalances are still there… everything that was out of whack at the beginning of the year is still out of whack…

And with the Dow at 21 ounces of gold, as we explained yesterday, stocks are still expensive.

The simplest, surest trading strategy in the world is just to go back and forth between stocks and gold. You spend a lot of time standing still – 39 years out of the last hundred, using our formula – but it pays off.

You buy stocks when they are cheap, relative to gold. When stocks are expensive, you sell them and put your money back in gold, where it will be safe.

Go back 100 years. When you could buy the Dow for 5 ounces of gold or less, you bought stocks. When it took 15 ounces or more, you sold them.

This simple strategy would have had you making a total of only six transactions over the entire century, or about one transaction every 16 years.

By comparison, the same money invested in the stock market and left there over the same time would be worth $67,000 today. (This calculation doesn’t include any dividends, taxes, or commissions.)

Just as investors under-appreciate immobility, they greatly overestimate the forward movement of stocks. Popular books and sell-side shills tell them to expect to make profits forever.

According to the theorists, investors are allocating their precious capital to America’s leading industries… and earning a “risk premium” (over bonds) for being mom and pop capitalists.

Many investors think that just being “in the market” should make them rich. They believe they are funding the great American enterprise machine; they deserve to make money.

But as recently as 30 years ago, the Dow was only around 2,000. And since then, most of the gains have not come from healthy, organic growth in sales and profits. They’ve come from fake money and false pretenses.

The Fed began backstopping the stock market in 1987, and then multiplied America’s monetary base by 10 – putting $4 trillion into the capital markets.

Over the last 22 years (roughly from the time we got our last “sell signal” from the Dow-to-gold ratio) the payoff from the S&P 500 has been no better than from gold. Both are up about 250%.

And even after the biggest bull market in stocks of all time, the Dow in 2017 was worth no more than it had been 88 years before. You could have bought the entire Dow last year with the same 15 ounces of gold that would have bought it in 1929.

In terms of the Dow-to-gold ratio, there were only two other periods in the last 100 years when stocks were higher.

Following our formula – buy stocks when the Dow-to-gold ratio is below 5; sell stocks when it is over 15 – you would have multiplied your real wealth – gold – 58 times.

And you would have done so with very, very little risk or volatility. Most of the time, you would have been immobile, simply holding gold and waiting for stocks to go on sale below 5 ounces/Dow, where you could buy back in safely.

That would have meant standing still – being stock-free – for the last 22 years… missing the huge runup to 2007… and again from 2009. Not many people would want to do that.

FOMO – fear of missing out – would drive them to invest.

The fix isn’t in any more, not like it was. And the smart money isn’t buying; it’s selling. Once again, it is front-running the Fed, which is offloading assets, not accumulating them.

The Fed will reverse course, we predict. When the real pain hits, it will resume buying bonds and slashing rates to lift stock prices.

But not before standing still has paid off again… and the Dow-to-gold ratio is falling fast.

As Bill wrote above, U.S. stocks are falling fast.

In fact, this has been the S&P 500’s sixth-worst start to the fourth quarter in history…

Today’s chart puts that into perspective. It maps the S&P 500’s (and its earlier iterations) worst Q4 performances by year through the first 37 trading days (the number of trading days since the start of Q4 2018). 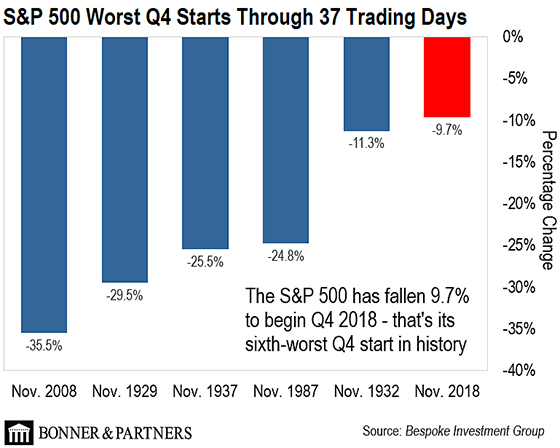 While this is the sixth-worst fourth-quarter start for the S&P in history, it pales in comparison to the top five…

It remains to be seen whether the current downturn will trigger a larger crash… or if we’ll see a rebound to close out the year.

But history tells us that the last four times the S&P 500 declined between 8% and 12%, where we are right now, the index continued to fall for the remainder of the year.

If history is any guide, there’s more pain ahead.

Surveying the Damage
U.S. stocks are falling. The S&P 500 is now negative on the year. But as bad as it is for the broad indexes, it gets even worse when you look closer.

Cannabis-Cola
Cannabis legalization is going mainstream. Canada now sells recreational pot. In the U.S., a majority of states now have some form of legal cannabis law. And the way users consume cannabis is changing as well. Out of the bong… and into the beer can.

In the mailbag, dear readers consider if FAANG is the new “Nifty Fifty”…

The internet and online trading has turned a great majority of investors into self-informed stock brokers. Why pay someone for information on a stock when it’s all there for you on the internet, and without those pesky commissions. The new “Nifty Fifty”… FAANG could be the Hula Hoops of the last twenty years, but the new self-researchers don’t think they’re too expensive… ”Everyone’s buying them.” This is FanDuel on steroids.

You say: “In other words, investors will lose money.” People who buy stocks that don’t pay dividends (FAANG) are speculators, not investors. Thanks.

Thank you for always giving me a smile or something to test my mind on. I am heading into my sixties… retirement, grandkids (four so far), and maintaining a marriage of over 40 years. As I read “your life happens,” many things come to mind… voting… I am voting today for my grandkids of tomorrow, as I have lived, and my kids are living, but my grandkids are going to have the burden of living with the voting of today.

And as important as these kids are to me, and as important as this election was to all our futures, I look at my retirement days after 45 years of employment and ask myself, what is my passion today, and what will make me get out of bed as I have for the past 4.5 decades, when I had purpose? This is where I am finding many people are getting lost. I am asking this to see if my bubble is just mine, or do others outside of my reach feel the same? Also, how did they go about finding their new path? Thank you for your time.

Dear Bill Bonner, thank you for sending the insightful words of your Diary. Have you written any books? I would love to read them. I just thought I was going to read more marketing spam, but after reading the article, I just had to read it again. As if I had read a Salinger book. I realized your gift. Thanks again for sharing. Also, condolences on your loss, and congratulations on the blessing of a new life born into your family circle.

Editor’s Note: Bill has authored numerous books over the years; including his two most recent titles, Hormegeddon and When the ATMs Go Dark. And as a reminder, subscribers of The Bill Bonner Letter get instant access to these titles online. Go right here to read them now. And if you’d like to join Bill and become a subscriber, you can learn more about The Bill Bonner Letter here.

Bill recently had a closed-door meeting with two of the biggest names in financial publishing: Doug Casey and Mark Ford.

What these three men talked about has been kept confidential, until now. To get all the details on what was said, go here. 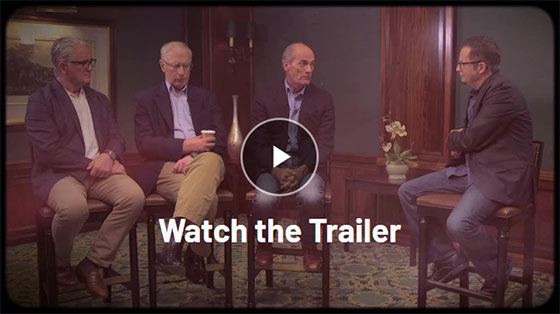