PARIS – We came up to Paris last night for a meeting… and to celebrate a wedding anniversary.

“Doesn’t Paris make you feel young again?” asked the person with whom we were recalling 34 years of married life, much of it spent in Paris.

“I see the little children in the park… the kids on their scooters… the ice cream shops… the leaves on the chestnut trees… The memories are so vivid, I feel like I could go right back into that life.”

We were sitting in a café… It was Sunday night; many of the restaurants were closed. So we decided to take advantage of the balmy weather to have dinner on the sidewalk.

The sun was still high in the sky when we sat down. Children rode their bicycles. Mothers pushed strollers. Autos stopped in front of us, unloading families coming back from weekend holidays.

We had been there, done that. Now, we move on to another stage.

“You cannot step in the same river twice,” we quoted the philosopher Heraclitus.

Somehow, the stock market made it through another month.

But the primary trend still seems to be down. The stock market peaked out in January. So far, there is no sign that it intends to take another run at its all-time high of 26,600 on the Dow.

Meanwhile, bitcoin and its crypto buddies are taking a beating. Bloomberg reports:

Bitcoin’s meteoric rise last year had many observers calling it one of the biggest speculative manias in history. The cryptocurrency’s 2018 crash may help cement its place in the bubble record books. Down 70 percent from its December high after sliding for a fourth straight day on Friday, bitcoin is getting ever-closer to matching the Nasdaq Composite Index’s 78 percent peak-to-trough plunge after the U.S. dot-com bubble burst. Hundreds of other virtual coins have all but gone to zero – following the same path as Pets.com and other red-hot initial public offerings that flamed out in the early 2000s.

Talking to one of our sons:

“You boys must be losing a lot of money.”

“Not yet. Bitcoin is still more than twice what we paid for it a year ago.”

“Maybe you should sell. Get out while you’re still ahead.”

“Nah… we got in intending to stay. We’re going to stick with it. We want to see how it turns out.”

Well, that’s one way to look at it.

Cryptos were always an unsolved puzzle to us – a jigsaw puzzle with the pieces strewn all over the floor. Neither negative nor positive; we just didn’t know what to make of it. We still don’t.

We just have to watch and see what it looks like when the picture finally comes together.

Much more predictable is the coming debacle in the stock and bond markets. This is a picture we’ve seen before.

Typically, a market crash happens at the worst possible moment… when prices are still near a peak… and when “nobody could have seen it coming.”

The financial pundits are telling people what a great economy it is. The sell-side pros on Wall Street are on the TV explaining why this is a great time to “buy the dips.” And the politicos are reminding us what a great job they are doing.

Mr. Trump, for example, is not one to hide his light under a bushel. Instead, he takes it out and shines it in our eyes. He tells us the U.S. economy has never been better, thanks to him.

Country’s economy is stronger than ever before with numbers that are getting better by the week. Tremendous potential, and trade deals are coming along well.

Meanwhile, his flacks stick to the same script. Chief economic advisor Larry Kudlow, for example, assures us that deficits are going down. The Fiscal Times:

In response to a Maria Bartiromo question about the outlook for economic growth and forecasters who say we might be heading for a recession in 2020, the director of the White House National Economic Council said tax revenues have been boosted enormously. “As the economy gears up, more people working, better jobs and careers, those revenues come rolling in and the deficit – which was one of the other criticisms – is coming down, and it’s coming down rapidly,” Kudlow said.

Higher tax revenues were promised when Republicans passed their tax cut bill in December. The increased revenues were supposed to cut the deficits and prove that you can get an economic boost – even this late in the expansion cycle – simply by leaving more money in the hands of taxpayers.

We doubted it was true. And we might have to admit we were wrong…

…if Mr. Kudlow were telling the truth.

But he’s not. The Fiscal Times continues:

The Treasury Department reported earlier this month that the deficit over the first eight months of fiscal 2018 totaled $532.2 billion – an increase of $99.4 billion, or 23 percent, from the same period last year. Government revenues during that time were indeed higher, totaling $2.22 trillion, up 2.6 percent from the prior year, but outlays rose even faster, coming to $2.76 trillion, up 6 percent year over year.

Let’s see, for every additional dollar in revenue, the feds spend two. How does that work again? We don’t know.

But we know where this river takes us.

Down… down… through the rapids and over the waterfalls.

U.S. crude oil went on a tear to lead a commodities rally during the second quarter of this year…

That’s the story of today’s chart, which maps the performance of oil, natural gas, and the overall commodities sector during Q2 2018. 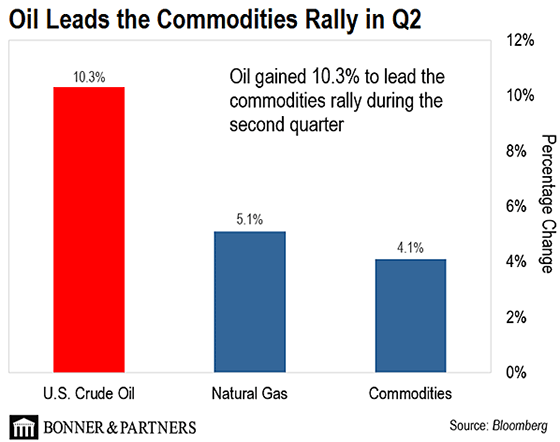 Trade War Hits Chinese Stocks
Chinese stocks are in trouble. Losses in Chinese stocks have hit $2 trillion since January. The American/Chinese trade war is believed to be the culprit. And things likely won’t improve any time soon…

Here’s Some Cryptocurrency… Now Use It
As Bill reported, the losses from the recent crypto drawdown are reaching “dot-com” levels. The success or failure of cryptocurrencies will ultimately hinge on whether or not people use them for day-to-day transactions. And one company has an interesting strategy for making that happen…

They Called It “The Chicago Plan”
In 1933, the government considered a plan to take complete control of the money in your bank account. This “Chicago Plan” was never enacted. But Dan Denning, Bill’s coauthor on The Bill Bonner Letter, believes it is experiencing a resurgence…

In the mailbag, two different opinions on domestic spying in America…

My two cents: I am not a paranoid prepper type, and I have never been affected directly by online privacy breaches… that I know of. Perhaps because I don’t do anything online to be ashamed of, I don’t have much fear around this. What is the real risk? Will they take away my Schwab account? Guardian for Life? Viatical and REIT investments? I still don’t see a reason to freak out about this… yet. Do you?

Excellent article! Of course, it is imperative for us to be updated on illegal surveillance and data grabbing…

Meanwhile, a dear reader weighs in on a comment from a past mailbag…

In the mailbag, Erich K. states, “Foreigners have grown richer on our dime, and our domestic economy has become poorer.” As a foreigner, I see things differently. The USA has depleted its own economy by misusing its enormous advantage of being the major world currency. This has become its major export. It is easy to see why the domestic economy is poorer.

Why produce widgets in Chicago when you can buy them cheaper in China, paying for them by simply using the printing press? Citizens have been living high on cheaper foreign goods because the local market could not compete with the foreigners. This has increasingly destroyed local U.S. markets. Some day – possibly not too far away – other nations will move to another currency, or to a basket of currencies, which will severely impact living standards. Then watch what happens!

The USA needs to get its house in order. Even though many of us dislike much about The Great Disruptor, Donald Trump, he was necessary to curb the excesses of selfish governments and deeply invested interests. It will be interesting to see what follows.

America is on the verge of a second civil war…

That’s the message from Palm Beach Letter editor, Teeka Tiwari. But this time, the war won’t be fought with conventional weapons. Here’s what it will look like…