SALTA, ARGENTINA – We watch. We wait. We wonder.

“The first panacea for a mismanaged nation is inflation,” wrote Hemingway. “The second is war…” he continued. And the third is concrete.

We’ll probably see all of them in the years ahead.

Top macroeconomists are calling for a recession “before the end of 2020.” What? We’ve already been waiting for years…

We’d like to see some action before then, if for no other reason than that we are tired of waiting.

It is like someone playing Russian roulette by himself, while you watch. He spins the chamber. He pulls the trigger. Nothing happens. You know how it is going to turn out. You’d just like to see him get it over with, so you could go on with your day.

In markets, things always take longer than you expect to begin. But once the hammer finds the chamber with the bullet in it… everything moves fast. Until the next major trend is underway.

When that will be… we don’t know. But it must be getting close. The Financial Times reports:

The number of borrowers in the US who are seriously behind on their car loans rose to the highest level on record in 2018, raising concerns about the deterioration of consumer credit despite strength in the broader economy.

What? The tide hasn’t even gone out yet, and a lot of swimmers are losing their shorts.

But why would consumers be unable to keep up with car payments… when unemployment is supposed to be at a record high? Our guess is that the “jobs, jobs, jobs” that the administration crows about are more statistical fiction than Main Street fact.

But it hardly matters.

In our Diary, we’ve taken for granted that the economy – guided by the Fed and egged on by Wall Street – will blow itself up.

More and more debt piles up. The economy, burdened and hobbled by car payments, mortgage payments, corporate debt payments, and interest on the national debt, staggers… and then falls.

This is not a prediction. It is an observation. Cycles are called “cycles” because they repeat themselves. The credit cycle is no exception. Bust follows boom. Always has. Always will.

We’ve been looking at what will happen next. That is, when the next trends and policies, the ones that will dominate for years ahead, reveal themselves. Our guess – a view we share with Alan Greenspan – is that we’re headed for stagflation.

Central banks, worldwide, have added some $21 trillion in new cash over the last 16 years. Almost all of that money went into the financial economy. That is how the rich got so much richer during that period. Their asset prices rose; they floated on a rising tide of cash.

That is also how worldwide debt rose to $250 trillion today, from only about $50 trillion 16 years ago.

As asset prices rose – the Dow, for example, rose nearly 300% over the past 10 years – so did the collateral of consumers, businesses, and speculators, which could then be leveraged to borrow vast new sums. Globally, the ratio of output to debt rose from its traditional 1-to-1.5 level to 1-to-3.5 today.

All of these excesses and absurdities will be corrected, of course; Mr. Market will take care of that. Then, the leverage works in the other direction – collapsing asset prices, credit, and the real economy.

And that will set in motion all the usual clunky and scammy wheels that pretend to reverse the natural correction. Interest rates will be cut to zero… and then below zero.

And quantitative easing (QE) is no longer like that little hammer that you’re only supposed to use to break the glass in case of an emergency… Now, it hangs on the Fed’s toolbelt next to its stretchy measuring tape.

And it won’t take the feds long to find other tools; soon, they’ll be buying ETFs and launching huge “infrastructure” programs to “get the economy going again.”

That’s where the concrete comes in. At one point in the 1990s, after the Japanese stock market had collapsed nearly 70%, Japan was pouring more concrete than the USA. The idea was to “get the economy moving again” by cementing up every riverbed… damming every river and building bridges to nowhere and roads to where no one wanted to go.

Then, the Chinese took over the concrete lead. They built factories, roads, bridges… and apartments by the millions. Cement production… and cement usage… rose to staggering levels. If it had all been dumped on Washington, poured out over the capital and allowed to harden, well… it would have been a good thing.

This leaves policymakers little monetary ammunition; they’ll have to blow their brains out with fiscal policy – running bigger deficits (also financed by the Fed’s made-up money) – to stop the correction.

Our guess is that concrete sales will rise as infrastructure projects get underway. But a better place for your money is probably gold. More federal spending, in a slumpy economy, will most likely mean higher rates of inflation.

Since 2003, the U.S. has enjoyed an era of low inflation. Even so, prices have officially risen almost 40%, while the real cost of living for real people has risen much more.

Over the next 16 years, you should expect your money to lose value even faster… perhaps with prices 2 to 3 times higher by 2035 than they are today.

So, what do we do? Watch. Wait. Wonder. And buy gold… maybe it will go up. Maybe it won’t. But it won’t go away. And a lot of other things will.

MARKET INSIGHT: THE BEAR ALWAYS TAKES DOWN AS MANY AS POSSIBLE

The American Association of Individual Investors (AAII) is a research organization with 150,000 members in the U.S. Since 1987, the AAII has been asking its members the same question every week: Is your six-month outlook for U.S. stocks bullish, bearish, or neutral? 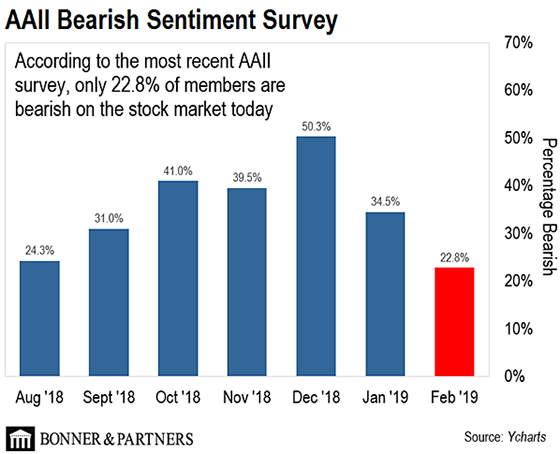 As you can see, only 22.8% of AAII members are bearish on U.S. stocks today. That’s compared to 34.5% of members responding as bearish last month.

For instance, only 24.3% of investors were bearish last August… right before the S&P 500 began its 20% correction the very next month. And by last December 27, after the S&P had already bottomed out to begin the current snapback rally, 50.3% of investors saw further pain ahead.

And we have seen that same pattern play out consistently. Individual investors tend to be the most bullish just before stocks fall… and vice versa. That shows you how useful this survey is as a contrarian indicator.

With only 22.8% of investors worried about lower prices today, the current snapback rally has done its job… Most investors are bullish on stocks once again. And that is a major red flag.

As Bill has said in the past, a bear market always wants to take down as many investors as possible. You don’t want to be one of them. And as Bill wrote today, gold is an excellent insurance policy.

What Do Central Banks Know That You Don’t?
Central banks the world over are doing something curious. They’re buying gold. Lots of it. New data shows that central banks are buying the most gold since the end of World War II. It makes you wonder… What are they up to?

Why China Is Buying Gold Miners
China is on a spending spree. The country is snapping up gold miners as quickly as it can find them. Why? And what does it mean for you? Dave Forest, Casey Research’s resident commodities expert, has the story.

Silicon Valley: “We’re a Massively Dysfunctional Region”
Silicon Valley is the envy of the tech world. Almost every single groundbreaking technology company of the past few decades has roots in the pristine California region. But for those on the ground, it’s anything but paradise.

In the mailbag, dear readers can’t seem to decide. Does Bill have a “liberal bias”? Or is he “too conservative” at times?!

I love the people writing in to Bill’s Diary complaining he’s too liberal! I frequently find myself musing, “Eeesh, maybe Bill’s a tad bit too conservative for my comfort…” What a sorry state we Americans are in these days. I don’t subscribe to this site for political inspiration but I also recognize that financial advice and help, by design, just has to include some political ideology due to the way money and politics are symbiotic and forever in an embrace.

Bill, you can’t please all of the people all of the time. Another perfect article. Thank you!

I think your bias is for a mythical philosopher king, who would probably be a financially aware billionaire. I am afraid the definition of tribalists are those too immature to examine the pros and cons of both alternatives, so they call anyone who is mature enough a traitor. Because there is only one president you compare him to, not Clinton or other Democrats, rather to what you would actually like a president to be about.

Yes, Obama was the idiot frontman for the pathologically liberal hordes. Trump is the greatest president for the people in my 63 years, yet you think it is cute to bash him like all those desperate for some approval.

I find the strong comments in your mailbag depressing and similar to European public sentiment in the 1920s and 1930s, just before the crash and leading up to WWII. Back then, if you didn’t support right-wing dictators, then you were labeled as a communist. Likewise today, if you don’t support DJT then you are accused of supporting Bernie Sanders or AOC. Is there no voice of reason out there that neither are good?

I only know President Trump has been put in a position to fight every inch of his way to get anything done. Let the man do his job. I feel if he has made it thus far, with such a division and still continues to put one foot in front of the other to “try” to get things done, he is a proven strong leader.

It is a very dubious proposition that the opinion of any one of us is 100% right on every question. It is equally dubious that any one of us is 100% wrong on every question. There is often some truth in a conservative opinion and some truth in a progressive opinion on the same subject. Likewise, a liberal opinion and a dogmatic opinion may both be partly right.

The reason I find Bill’s writing worth reading is that it is not committed to uphold any one of the polar extremes, but rather looks at each situation individually. I don’t always agree with your conclusions, but sometimes they do make me aware of an error in my thinking, which I consider valuable to me.

I cannot agree more or enough with your perception of reality, Mr. Bonner. Thank you for your attempts at educating the zombies, trumpsters, and liberals in their vehement ignorance.