DUBAI – Last night, we went for dinner in the tallest building in the world – the Burj Khalifa, an immense tower of mirrored metal and gleaming glass.

From our restaurant on the 122nd floor, we could look down on the hotel below:

The whole experience was odd and unnatural. But not unpleasant.

“Businesses are either expanding or they are contracting,” explained a colleague to our group yesterday.

“When they are expanding, they are driven by markets… looking outward to find new customers, new products, new ways of doing things. They invest in new factories and new employees. And they are not afraid of competition; they welcome it.

“But when they are contracting, they are driven by politics. They look inward, and everybody tries to get as much as he can. The shareholders, managers, and employees all try to protect themselves… with bonuses, non-compete clauses, golden parachute clauses… whatever they can think of to avoid competing in the outside world.

“Of course, it’s never 100% one way or another. Even in growing, expanding businesses, there are always some people who play politics. You should try to get rid of them.”

The same is true for countries, societies, and economies. They are sometimes driven by markets. And often by politics.

And just to be sure we’re on the same page… let’s describe the difference.

Markets are based on cooperation. You make win-win deals… hoping to come out ahead. The leading emotion is greed – the urge to get more.

Politics are based on force and the lust, not for progress or prosperity, but for power. And as Chairman Mao put it, power comes “out of the barrel of a gun.” The leading emotion is fear – the desire to protect what you’ve got.

Politics got a boost with the election of Donald J. Trump. Before his administration took over, trade was very low on the feds’ agenda. Most of it took place as a purely market-led activity.

Now, hundreds of billions of dollars’ worth of goods are subject to political whims and insider payoffs. The trade deal with China, for example, is pure Swamp Food, with more than 2,500 pages of lobbyist-inspired fat and sugar.

We doubt that a single elected representative has even read it. But more than 1,000 companies have already hired lawyers and lobbyists to angle for exceptions and exemptions.

The Fed was already lolling in the Deep State before the coming of The Donald.

But now, monetary policy is a subject of dinnertime conversation. And the president of the United States of America openly pressures the Fed – which is supposed to be independent of politics – to gun up the stock market with lower rates.

Immigration policy, too, became more political. Mr. Trump realized that many Americans preferred the country as it used to be, rather than what it was becoming. He proposed to build a wall to Make America Great Again.

Expansion and contraction are just the natural way of things. We get bigger as we grow up. We shrink and need flu shots as we grow old.

Countries are natural things, too. After a period of expansion, the elite begin to look inward; they use the fed’s power to pass laws, write regulations, and issue fake money to extract wealth from the middle classes.

Typically, in a period of expansion, you want a piece of the action; you want to profit from progress.

But in a period of contraction, the scales fall from your eyes… projects fail… hopes disappear… and you want safety. Historically, investors favor gold.

Colleague Tom Dyson reminded us of why the Dow-to-Gold ratio – which we call our Greed/Fear (G/F) gauge – is so important.

It looks deep, beyond stock prices and the headlines. It peers into dark, desperate hearts… and measures financial lifecycles… and the tides.

And now, we see that people may be buying stocks, but they’re buying gold, too. Here’s Bloomberg:

Gold Bursts Past $1,400 as Bulls Buoyed by Dovish Central Banks

Gold’s firmly back in favor.

Prices have taken off after a lackluster few months, passing $1,400 an ounce for the first time since September 2013 on Friday. Investors have piled back into exchange-traded funds and the U.S. Federal Reserve gave bulls a major boost this week when it opened the door to reducing interest rates, weakening the dollar and adding to gold’s appeal.

The great economic tide is ebbing, we think. It has been since 1999. As we saw yesterday, the Fed’s ultra-low rates goosed up stock prices but made the real decline worse.

And if we’re right, G/F will tell the story. No matter what the Dow does, it will sink below 5 before it finally reverses.

Main Street’s New Neighbor: Wall Street
The starter house market is competitive. But now, more and more investors are buying up single-family homes and flipping them for profit. That’s driving up prices on homes that were once affordable… leaving mom and pop without a place of their own…

It’s 2008 All Over Again
President Trump’s tax cuts were supposed to juice up the economy. And they did… briefly. But momentum is slowing. Experts say the economy is starting to resemble the version from the Obama administration, when the Federal Reserve tried to exert more control. Will history repeat itself?

The Man Who Bet $100,000 on Bill’s Trade of a Lifetime
Recently, Bill shared his Dow-to-Gold trading model with his long-time friend and colleague Tom Dyson. Tom was so convinced by the model, he went “all in” on the trade. And he believes it could be the secret to securing intergenerational wealth…

Today, a dear reader responds to Bill’s essay on how war is just another government program to rip off American citizens…

Bill, you wrote, “The U.S. faces no enemy capable of invading it; it can easily defend itself against any plausible attack. And even the trivial threat of terrorism would probably go away if the U.S. withdrew its troops from overseas and minded its own business.” Exactly. Bring them home to protect home.

Meanwhile, another dear reader writes in with a theory about President Trump’s infamous tweeting habits…

Bill, have you ever researched the market movements that occur after Trump does his famous tweeting, whether it’s about China, immigration, Mexico, or the Federal Reserve? I would not be surprised if his “empire” is arbitraging its way to solvency and beyond. We know he can’t do it honestly in the business world. He’s hired illegal immigrants, filed for multiple bankruptcies (not illegal – just a bad business model), stiffed the small contractors, and lawyered up to prevent win-win resolutions of these disputes!

And finally, more praise from readers for Tom Dyson, his bet on the Dow-to-Gold ratio, and his tales from abroad…

Hello, Tom. It was great to get an update on your goings-on. It’s strange, since I’ve never met you in person, but I somehow feel a kinship with several of the financial writers that have helped me over the years. You are one of them.

Palm Beach Research Group guru, Teeka Tiwari, is gearing up for his biggest announcement yet… and no, it’s not cryptos.

He says the new opportunities in the cannabis sector could give early investors as much as 3,700 times their money.

He’s been traveling all over the world, searching for the best cannabis stocks for you to invest your wealth in. And on Wednesday, June 26, at 8 p.m. ET, he’ll share the details on five small-cap stocks that could make you a fortune.

Plus, he’ll reveal a unique Wall Street investment that turned his $1,000 stake into $1.6 million. 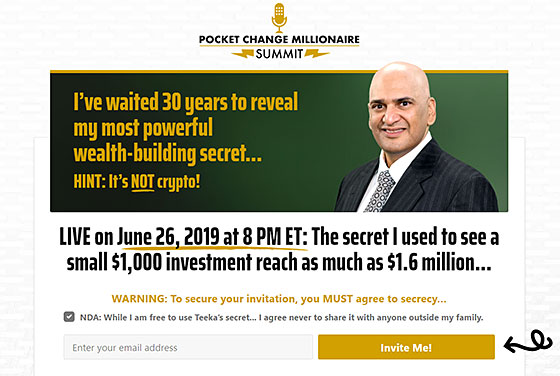