BALTIMORE, MARYLAND – The stock market may have resumed its selloff sooner than we expected.

The S&P 500 Index tumbled 2.5 percent for the steepest selloff since Christmas Eve, when the gauge fell within a few points of a bear market before embarking on a 6.8 percent rally over the next five sessions. Apple plunged the most since 2013 after citing an unforeseen slowdown in China for its woes.

What’s going on? Over and over in the fourth quarter, as the S&P 500 plunged 19.8 percent to the brink of a bear market, investors heard the same refrain: don’t panic; the economy, and corporate earnings, look strong.

In the last 24 hours, confidence in those assurances has taken a hit. The Dow Jones Industrial Average fell more than 600 points, or 2.6 percent, Thursday morning, while losses in the Nasdaq 100 spiraled toward 3 percent.

But what did investors think? What were the odds that Apple would continue to come up with knock-your-socks-off new products?

What were the odds that this geriatric bull market would race around the track again and set new records?

Of course, you never know. But stocks ultimately depend on the economy. After all, investors are buying streams of income that must come from consumers. And since the “beautiful economy” story was always counterfeit, there had to come a time when the jig would be up.

Whether that begins now… or later… we don’t know. But it is probably coming. And so, we turn to The New York Times for some bad advice on what to do about it:

The sensible response to this unnerving series of developments is to do pretty much anything else. Read a book. Go for a walk. Take up knitting. Or just do nothing at all, like take a nap.

If you are a long-term investor (and any money you have tied up in the stock market should be intended for the long term to begin with), tumult like that of the last few months isn’t something that should cause panic. Rather, it’s the price you pay for enjoying returns that, over long time horizons, are likely to be substantially higher than those for cash or bonds.

The entire point of investing in stocks is that you expect to get greater long-term returns in exchange for tolerating bigger ups and downs.

Count on the Times. Whether it is politics, economics, or finance, the Old Gray Lady generally has a point of view that is not worth having.

Still, it’s breathtaking how the writer of the above piece managed to cram so much misinformation and so many wobbly assumptions into a few short paragraphs.

Should you ignore a potential bear market? No.

Do stocks always go up over the long run? No.

Will stocks go back up in a few months? Probably not.

The long-term argument for stocks is simple enough. If you’d invested $1,000 in stocks 100 years ago, you’d have a little over $15 million today.

But it doesn’t mention that you would have spent nearly half your time – 46 years – waiting to get back to the previous highs.

Nor does it mention that sometimes, you have to wait forever. Japanese investors have been waiting 30 years to get back to breakeven. After three decades, the Nikkei is still 46% below its all-time high set in 1989.

We don’t live forever. And most of us are likely to want access to our savings sometime before we die. That’s why our old friend Richard Russell used to say that the most important rule in investing is to “avoid the big loss.” It’s very hard to recover from a big loss. Life isn’t long enough.

And that’s why our Long-Term Dow/Gold Trading Model (LTDGTM) is set up to get us out of stocks before a big selloff.

Oh… and one other thing the “buy-and-hold” argument doesn’t mention: All you really earn from stocks is the dividends you receive. In terms of gold, the capital gains on stocks disappear.

Prices just go up and down. But you can buy the Dow stocks today for the same 18 ounces of gold you could have used to purchase them in 1929 – 90 years ago.

In 1929, it was the post-World War I loan repayments from Europe that flooded into the U.S. that created the Roaring Twenties stock boom.

Today, it is the $4 trillion from the Fed, along with negative real interest rates, an unfunded tax cut, and corporate buybacks that have provided the Bubble Epoch stimulus.

Both gave the markets a boost. But both were temporary. And in the case of today’s bubble, fraudulent.

In the 1920s, the money was real – gold. And growth rates were real – based on automobiles, rising wages, and electrical appliances. And they were twice as high as today’s growth rates.

Today, the money is fake… and the growth is counterfeit.

As we pointed out yesterday, it’s not like a coin toss. It’s not even odds, 50/50, up or down. Because movement in the financial world is “path dependent.” Where you go depends on how you got where you are, in other words.

Since the global financial crisis of 2008, the economy has grown at a yearly rate of 2.2% – the weakest recovery on record.

Meanwhile, stocks have gone up, on average, at a rate of 11.3% each year – the greatest bull market rise on record.

Which of those two things is durable… lasting?

The real Main Street economy, with its modest growth? Or the Wall Street financial world, with some of the most extravagant stock prices ever recorded?

Which will give way when the next crisis hits?

We already know, don’t we?

Editor’s Note: As Bill showed above, stocks are falling fast. The mainstream financial press reports that this bull market is on its last legs. But according to master trader Jeff Clark, the bull market isn’t just weak, it’s officially over. Below, he shows the precise moment the bull finally died… and the bear took hold.

The bull market died on Monday.

That shouldn’t be a surprise to most folks. The bull was on life-support for the past two months.

I use the 20-month exponential moving average (EMA) line on the S&P 500 as the defining line between bull and bear markets.

If the S&P 500 is trading above the line, then stocks are in a long-term bull market. If the index finishes below the line at the end of any month, then the bear is in charge.

On Monday, the S&P closed the month of December below its 20-month EMA. The bull market is over.

But we’ve also had a few false signals over the years as well. For example, the S&P briefly dipped below the line in 2010 and 2011.

We had another false signal in 2015. The S&P 500 lost ground in that year. But the index recovered from its brief dip below its 20-month EMA. And it rallied – almost non-stop – for the next three years.

So, I suppose the bulls can point to the action in 2015 and argue that we’ll see something similar this time around. And that’s a valid argument.

If the S&P can reverse and close back above its 20-month EMA at the end of this month, then we can concede that the recent action is nothing more than a correction.

But I’m not that optimistic.

The technical setup today looks eerily similar to 2007/2008. The sharp, sudden rise in longer-term interest rates, the peak in investor margin balances, the erratic shifting of investor sentiment, the large ramp higher in volatility, and the S&P’s decline below the 20-month EMA all suggest that we’re in the early stages of a prolonged bear market.

Stock prices will be lower one year from now than where they are today.

The bull market had a wonderful, long life. But it’s over now. The bear is in charge.

P.S. As I said above, I believe we’ve entered a new bear market. Most investors will be wringing their hands. But I couldn’t be more excited.

That’s because I’ve spent decades crafting a strategy that lets me pocket gains in days, not years. And this strategy works best during bear markets. That may sound too good to be true. But I’ll prove it to you right here.

How to Survive the Bear
Bill sees tough times ahead for U.S. stocks. Investors could be sitting on losses for years. If our editor is right, nobody will be able to fully escape the bear market. But a proper asset allocation strategy can save you from the worst of it…

The Trump Slump?
At the height of the bull market, President Trump repeatedly took credit for climbing stocks. For better or for worse, POTUS owns this market. So should he also be blamed for its fall?

Visualizing Global Government Debt
As Bill has repeatedly warned, the debt of the United States government is reaching unprecedented levels. But it could be worse. At least we’re not Japan…

Stocks may be falling, but in the mailbag, dear readers continue to discuss Bill’s New Year’s Day Diary about time…

Bill, as always, you make me crack up laughing. What a great way to kick off the new year. I don’t follow the math as well as you do, but I’ve long been of the mindset that because the so-called dollar is the world’s reserve currency, we have been able to subsidize our standard of living (such as it is for Main Street) by exporting the bulk of our inflation to China in exchange for the cheap crap at Walmart.

I happen to agree with your theories and observations about the standard of living for the working class being unchanged since 1971, and that all the machinations of government/public policy exist solely for the benefit of the Pareto foxes. But my question is: How much longer can this continue to go on? It seemed as if the Chinese were willing to subsidize our standard of living while they built their infrastructure and domestic demand for their goods and services. Recent events (that you’ve been reporting on) suggest that we may be at the tipping point or close to it.

Hello Bill, I enjoy your perspectives immensely. As you have eloquently spelled out over and over, how can one argue there isn’t a present day false economy and many bad characters involved? It is not sustainable, and the cost of time and natural order will prevail (basically, too many wagon sitters and not enough pullers).

My simple explanation: It’s part of the monkey business of human existence. So what is the solution for 7.5 billion people? Is there a moral answer? Or is the chaos of the human condition unsolvable, and the best answer is to just take care of yourself?

Thank you, Bill. Reading your article is a good way to start the new year. Not that it is overly cheerful, but it is funny.

As Bill wrote above, stocks are headed lower. In the face of this looming bear market, investors need a plan…

We recommend you start by reading Bonner & Partners’ newly released report: America’s No.1 Portfolio Protection Plan. Get a copy for yourself right here. 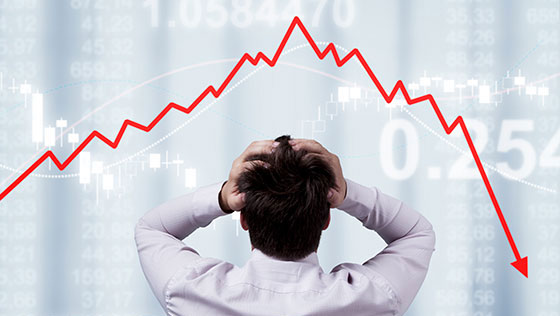