POITOU, FRANCE – “The Age of Easy Money Is Nearly Over,” reads a headline at Bloomberg.

We suspect that it has hardly begun… stay tuned.

In the meantime, we are exploring the past to get hints of the future.

The future casts its shadow backward. If you think, for example, electric carmaker Tesla will be a $1,000 stock someday, you will probably want to buy it now; its price will rise in anticipation.

But so does the dark pall of the past loom over today and tomorrow.

Yesterday, we saw what happened to the last great visionary in the automobile space, John DeLorean.

So far, he is destroying capital, not creating it.

And today, we look at another capital destroyer, Amazon.com chief Jeff Bezos.

Nearly 20 years ago, we described Amazon as the “River of No Returns.”

Since then, the stock has made investors rich, and we looked like a fool for two decades.

But the markets make fools of us all, sooner or later. The hardest decision you face is when to get egg on your face – at the beginning or the end of a trend.

Amazon is now one of the most richly valued stocks in the whole world… and Mr. Bezos, visionary extraordinaire, is the world’s richest person. His personal wealth, based on Amazon’s current share price, is more than $90 billion.

Capitalism is a win-win world. You get, more or less, what you give.

Which makes us wonder: What new thing has Mr. Bezos given the world that should make him its richest biped?

A cure for cancer? World peace? The funniest movie ever made… the most sublime music… a technological breakthrough equivalent to the Post-it note?

None of those things, of course. Instead, he has given us large-scale, online retailing.

Is this worth a market value in excess of half a trillion dollars? Is it equivalent to open-hearth steelmaking… container shipping… or acorn-fed ham?

We don’t know. Shopping is always disagreeable – online or off.

Occasionally, when trying to find something, Amazon makes it less disagreeable.

We credit Mr. Bezos with a modest improvement in our lives. Not as important as Leslie Nielsen’s deadpan comedy in the Naked Gun movies… or Joe Dobbs’ inspired fiddle… or Mike Reynolds’ innovations in domestic architecture.

…and none of the people responsible for them made a fraction of the money Mr. Bezos made.

He has given us something new. But here at the Diary, we admit it: We’re an old fuddy-duddy.

The food and drink from 1985 were good enough for us. The trains, planes, and automobiles from 1995 seemed perfectly satisfactory.

Here in France, we have only wood fires and an electric blanket (invented in 1912!) to keep us warm… but they do the job just fine.

Déjà Vu All Over Again

Being an old fuddy-duddy is a great disadvantage in almost everything – sports, pop culture, politics.

But there is one thing where it gives us an edge…

We’ve been following markets – or at least the economics behind them – longer than most living humans.

We’ve seen more booms… more bubbles… and more crashes than most, too. We’ve met more bright-eyed, bushy-tailed investment geniuses… and watched them run themselves into a ditch.

We’ve heard hundreds of predictions that turned out to be false… read thousands of analyses that proved to be moronic… and listened to thousands more “experts” who, as it turned out, didn’t know what they were talking about.

Surely all that experience from the past must have some value today?

What have we learned that we can apply? What old friends can we find in today’s markets that can help us out? What gives us, as Yogi Berra put it, “déjà vu all over again,” warning us – as though by some sixth sense – of trouble?

Today, let us look more carefully at Mr. Bezos and the “River of No Returns.”

Although Amazon has grown in value… has its founder and chief finally managed to float some real profits downriver?

Has he given the world something worth a market cap of more than half a trillion dollars?

The short answer: It’s still the “River of No Returns.”

Amazon is no tech start-up. As far as we know, it has no proprietary, cutting-edge technology. It simply cuts prices, gives free delivery and good customer service, crosses markets effectively… and loses money on every sale.

It disguises the losses with low taxes, capital leases, and accounting tricks – but the losses are real… and unavoidable.

And since that business model requires super-low prices, there is no way for the company to fatten its margins. It can’t make up on volume what it loses on each sale.

In other words, the business model is a failure.

That is no sin… and perhaps no surprise; lots of businesses never make money.

But there is something about the Amazon phenomenon that is truly remarkable – like a plant that needs no light… or a mammal that needs no air.

Amazon is one of the strangest creatures ever to lurk in the capitalist ecosystem.

MARKET INSIGHT: A DECADE OF THE AMAZON EFFECT

Bill may be right about Amazon’s future as a business…

But investors have certainly been betting big on its stock.

Today’s chart looks at the return for investors in Amazon stock versus the S&P 500. 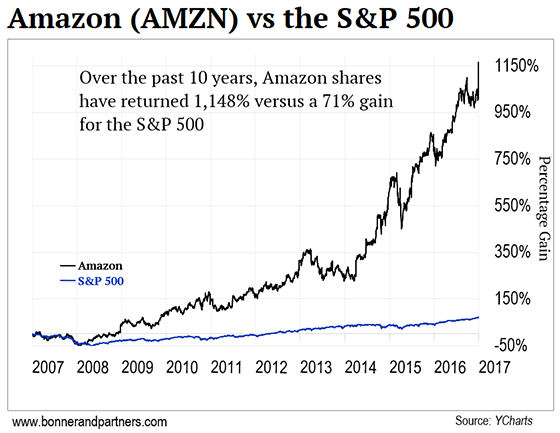 “The Amazon Amendment”
As Bill mentioned, Amazon is skilled at moving quickly into new marketplaces. And language buried in a congressional bill indicates that Amazon is looking to corner a new retail arena: government commercial spending.

Bitcoin Electricity Consumption Soars
The cryptocurrency bitcoin is not created instantaneously. Instead, bitcoins are “mined” by computers that solve difficult cryptographic puzzles. Each subsequent bitcoin becomes harder and harder to mine. And with a recent price spike above $7,000, the electricity needed to mine one bitcoin could now power an average house for a week.

Is America Headed for Civil War?
Civil strife in America is as bad as it’s been in decades. With new riots almost daily, Crisis Investing editor Nick Giambruno thinks this could all be leading to a new type of civil war. Nick explains how it could unfold, and what you can do to prepare.

In response to yesterday’s Diary, one reader has his doubts about Tesla.

Elon Musk of Tesla is either a crook or a gambler. He either knew he was a fraud from the get-go and openly fleeced investors, or he was a gambler who hoped he could stall long enough until his battery technology was refined enough and in production enough to back up his bold but premature, ahead-of-technology-and-markets claims.

He is a very smart man and one helluva salesman. There is an old adage in sales, that one should sell the sizzle instead of the steak. His sizzle is off the charts. I want to give him the benefit of the doubt and believe he is sincere. But until he actually makes money for his legion of backers, I’m just a doubting Thomas looking for a steak.

Get the right type of cattle. There are types of cattle that do not need to be fed hay!

It seems like you are still having trouble with the originarios on your new ranch. You are an entrepreneur. Isn’t there a way to let the originarios do their thing, but extract some price for the use of your land from them? Maybe they will find that although they make their point, it isn’t worth the price and move on. If it is that bad up there, you may have nothing to lose.

As a retired Wyoming rancher, my advice is sell your place in Argentina and buy in Wyoming. In our semi-arid desert environment, we routinely produce 600-pound calves in eight months with a 94% conception rate. We have no state income tax, we are the least populated state, and have no originarios – except for various federal agencies. You would be welcome to join with the many other refugees from the high tax states. This could be your trade of the decade!