MIAMI – Whew! Hold onto your restaurant reservations… your bitcoin codes… and your medical records; you might be able to use them after all.

As you know, all of our wars are still of the mock variety… at least, so far…

…the war on poor people…

…the war on drug users…

…the war on terrorists…

…the war on free trade…

…and even the war between Donald J. Trump and the Deep State.

They are all ersatz… counterfeit… bogus.

But people are funny. If everyone responded completely calmly and rationally under pressure, fake wars could stay fake forever. But that would be a very different world!

Instead, things go wrong. Sometimes, by accident, someone puts live ammunition in the guns. Or misses his cue. Or forgets it is meant to be fake.

All aspects of human life carry some “tail risk.” That is, you make the wrong move at the wrong time, and you put your tail at risk. And if you are the feds, doing win-lose deals, you put others’ tails at risk.

Yesterday, we highlighted the obvious risk of a trade war with China. The whole world economy now depends on ultra-low interest rates.

When you have $230 trillion of debt, each 1% hike in rates costs the world economy $2.3 trillion in annual interest payments. The cost of carrying so much debt is already more than the entire world’s corporate profits… and it’s rising.

If China chose to do so, it could suddenly drop a debt bomb on the U.S. – dumping U.S. bonds… driving up interest rates and collapsing the bubble in stocks and bonds in America.

The risk goes beyond a quick crash on Wall Street and a one-time shock to the financial system.

The U.S. is not the only country that is putting out fake money. When the U.S. spends money overseas, the foreigners end up with dollars. Foreign central banks have to create more of their own currencies to buy these dollars.

That’s how the whole world got flooded with “liquidity” and why the world’s asset markets – stocks, bonds, and real estate – have generally floated higher over the last 30 years. Foreign central banks amplified the Fed’s money printing with money printing of their own.

And now, the liquidity is drying up. The U.S. Fed is no longer adding cash and credit. Rather than buying more bonds (quantitative easing), it’s letting the ones it has roll off its balance sheet (quantitative tightening). And while rates are still near historic lows, the Fed has begun inching them upward.

Other central banks are cutting back, too. It wouldn’t take much to cause a panic.

But this morning, both the trade war and the war on terrorists seem to be under control. Everyone seems to be playing his part.

Earlier in the week, it sounded as though The Donald was ready to send in missiles to Syria, to avenge a gas attack. We were worried.

“Does the president realize that this is meant to be a fake war?” we wondered. Americans have no business in Syria – on either side – and have no idea what is going on there… or why.

But that’s fine for a fake war, right? If there’s not really anything at stake, you don’t have to worry about winning.

In fact, it’s best not to win… so you can keep the power and money flowing – from the many in the public to the few insiders in the military/security industry.

On the campaign bus, Donald J. Trump suggested that he would put a stop to these unwinnable wars… and as recently as last Thursday, he said:

Let the other people take care of it now. Very soon, very soon, we’re coming out… We’re going to get back to our country, where we belong, where we want to be.

Yes, home is where we Americans want to be. But the Pentagon and its crony suppliers can’t make much money if the U.S. minds its own business.

And it is now a Deep State requirement that the president gets behind the foreign wars. That means a bigger budget for the military… and more misadventures overseas.

Someone from the Deep State (he is surrounded by them) must have reminded him. By Wednesday of this week, Mr. Trump was back on message:

Get ready Russia, because they will be coming, nice and new and “smart!” You shouldn’t be partners with a Gas Killing Animal who kills his people and enjoys it!

Most likely, the gas attack never happened. So the counterattack didn’t happen, either. And the world sighs…

…and turns its attention to another fake war… the war between The Donald and the Deep State.

More on that next week.

Bitcoin has spiked 21% this week…

That’s the story of today’s chart, which tracks bitcoin from the start of 2018 to today. 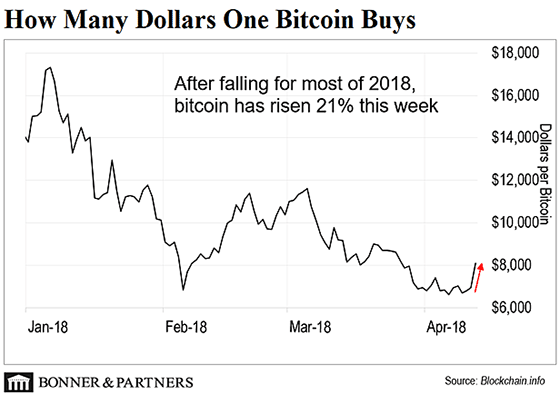 The world’s first cryptocurrency has since gained steam… It has risen 21% just this week alone.

Tesla: America’s Most Hated Company?
Electric car maker Tesla has legions of devotees. But the company is bleeding cash and well behind production schedules, making it a prime target for short sellers.

Facebook Was Just the Start
Facebook is in hot water after its recent data-breach scandal. And while Facebook may have gotten caught, one EU official says it’s not the only tech company hiding something…

How to Bulletproof Your Portfolio
Investors are on edge as stocks whiplash up and down. Chris Mayer, one of Bill’s top analysts, understands that these are difficult times. He shares a few steps to bulletproof your portfolio for the volatility yet to come.

In the mailbag, Bill’s Diary “The Economy Will Lose a Few Teeth,” has gotten readers thinking…

Bill, as you correctly point out, without excessive borrowing, we could not enjoy the prosperity it has bought us and the Chinese. It can end in a massive collapse for all global participants, or we can gently back off from the edge of the cliff. I believe balancing what we consume with what we produce is a crucial step in that direction, and that this is preferable to a collapse of the whole enchilada. Therefore, I support the Trump agenda. A gold standard by itself isn’t going to do a thing to improve the situation.

Bill, I’m going to be disappointed if you don’t work Baron von Raschke and his signature move, “the brainclaw,” into your daily Diary!

Dear Mr. Bonner, I read your statements regarding Trump and China and I almost fell off my chair laughing. I realize that you might not receive this, but I just wanted to present the fact that I think you are not only the smartest businessman alive, but your delivery on this subject was truly awesome. Thank you for making my day.

I love reading the Diary. But I don’t understand today’s comment that the Obama deficits were temporary. We doubled our debt to $20 trillion during his two terms. That debt will be rolled over forever at higher rates; there is nothing temporary about it. Debt from Republicans is just as toxic as the “investment” debt created by Democrats. Both spend money they don’t have. Both have a permanent impact. All you need to do is track government spending, which never abates, and government debt, which never ceases to grow.

Meanwhile, a “wraslin’” fan elaborates on one point…

I thoroughly enjoy Mr. Bonner’s philosophies on the economy. However, as a lifelong “wraslin’” fan, please note that in your recent letter, it seemed as though you were combining two of Mankind’s falls off the top during “Hell in a Cell’ (16 feet) into one.

Please give credit where it is due and amend your newsletter to educate the average non-wrestling fan subscriber (I’m assuming a large percentage) that Mankind was thrown once off the cage (breaking several ribs), climbed back up, and was then slammed through the top of the cage. This second “fall” broke his jaw and knocked out two of his teeth, rendering him unconscious. Thank you for your time.