BALTIMORE – Our work here at the Diary is to connect the dots.

And we begin connecting the dots of 2018 by looking over our shoulder at the brightest dots we connected last year.

One for the History Books

The first new form of money in 4,000 years – bitcoin and other cryptocurrencies – caught the imagination of traders and the public.

Second, the lowest interest rates ever recorded appeared on the scene… distorting prices and challenging our most deeply held opinions about time and money.

Third, Donald J. Trump was inaugurated as president of the USA, helping us understand more clearly what government is all about.

Yes, 2017 was one for the history books – a decisive, instructive, and rollicking year. What we learned from it is our subject for today and tomorrow. Then we’ll turn our head around and face 2018.

And yes, dear reader, we are back on the job after a delightful vacation at the family farm in southern Maryland.

Just before Christmas, we put our laptop away; we didn’t pick it up again until yesterday.

After reading Clive Bell’s book, Civilization, we thought it may be better to turn away from business and investment and focus instead on things that really matter: truth, beauty, family… and eggnog, heavily dosed with Irish whiskey.

But we couldn’t sit still. Hardly had the vacation begun than we were completely caught up in another project – rebuilding an old barn. (Readers with no interest in amateur wood butchery are invited to skip ahead.)

Southern Maryland used to be full of tobacco barns. The tobacco plants were impaled on wooden sticks and hung to dry in them. But when tobacco farming came to an end in the 1960s, the barns were neglected.

Like lonely old men, they stand solitary in the fields, with trees growing up through their abandoned foundations. Then the siding boards are stripped off – often to give restaurants and bars an “antique” décor – and the skeleton is allowed to collapse and rot.

We can’t bear to watch an old friend suffer. Rather than let another barn fall down, we decided to save it; we will use it as a workshop.

But tobacco barns are intentionally drafty; they were meant to air-cure the tobacco leaves. To make it useful as a workshop, we have to build a new foundation and tighten up the poplar siding.

“Why don’t you just call a professional; get them to do the job right,” suggested our partner-in-life Elizabeth… implying that we would make a mess of it.

“Are you kidding? You wouldn’t hire someone to eat your dessert for you, would you?”

There are some things a man should do for himself.

Left over from other renovation projects were a number of glass panels.

They had been double panes, but the vacuum seals had failed. So we took them apart, built a frame out of recuperated 4×3 posts, and used the single panes to build an exterior wall – protecting the old barn from wind and weather.

The challenge was the weather.

It felt like trying to peel an orange at the North Pole. If you live in Minnesota or North Dakota, dear reader, you must be used to it. But here, 20 degrees is cold… almost too cold for outdoor work.

Fortunately, we found an old pair of Carhartt insulated overalls… and bought some hand warmers. In this outfit, we were able to work without much trouble.

Our work progressed satisfactorily… that is, with much cursing and many false starts. We will return to it next weekend.

But now back to what we learned last year.

In summary, bitcoin helped us to understand money. Donald Trump helped us understand politics. And negative interest rates left us confused and depressed.

Of the three remarkable things that happened in 2017, negative interest rates may be the most remarkable of all.

They shouldn’t exist. A half a bird in the bush tomorrow is not worth more than one bird in the hand today. Tomorrow might not come. You might be dead. The birds might fly away during the night.

Interest rates are a way of measuring and compensating for risk and forbearance. Negative interest rates, on the other hand, turn the lender into a fool.

You give the bird to someone. He eats it. He agrees to give you two wings and a gizzard tomorrow. What kind of deal is that?

It doesn’t make sense. Instead, a reasonable person will only hand over the bird if he expects to get more than a bird in the future – if the interest rate is positive, not negative.

Negative interest rates imply that time – where risks abide – stands still, so that all the risks of getting to the future – you die, the birds fly – disappear.

Is that what negative rates are telling us? Has the universe changed so completely that time no longer matters? That the future no longer exists? That the old truths no longer apply?

We humans know things by analogy to other things that we know – either by experience or reputation.

Especially, in the money world, we recall the Crash of 1929… the Great Depression… the Eisenhower bull market… President Nixon’s fake-money decision… Paul Volcker’s triumph over inflation…

Doubt thou the stars are fire;

Doubt that the sun doth move;

Doubt truth to be a liar;

But what if a spaceship landed on stage during a routine production of Hamlet? How would the play turn out?

Truth would be a liar if something completely unexpected… something unscripted… happened. In other words, what if it really were a “new era”? What if the old rules… the analogies… the memories… and the price charts were senseless… useless… meaningless?

What if today’s world was so new, history had nothing to say about it?

Is that the meaning of Donald Trump? Of bitcoin?

What are these negative interest rates telling us? Are real time and real money out of style… no longer interesting or relevant? Is up down and down up? Will water flow uphill and the sun set in the morning?

Probably not. So negative rates must be signaling something else…

…and we think we know what it is.

Listen carefully. You can hear the faint whisper, like the last words of a dying man: “It’s all a lie.”

Stay tuned… as we explore the real meaning of Donald Trump, bitcoin, negative rates… and the world as we know it.

What were the best countries to invest your money in last year?

These trade like stocks on an exchange. But instead of giving you exposure to just one company, they track a basket of stocks from a specific country. 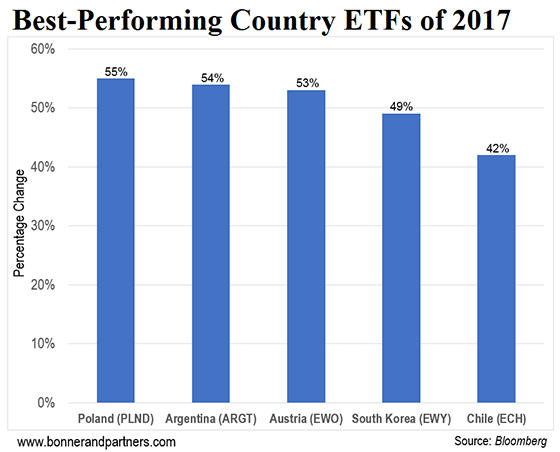 The best return on your dollar in 2017 was in Polish stocks.

The VanEck Vectors Poland ETF (PLND) was up about 55% for the year in U.S. dollar terms.

Three Timeless Investment Lessons From 2017
2017 was a wild year for U.S. stocks. As we kick off 2018, here are three timeless lessons from last year.

Former Treasury Secretary: The U.S. Is Broke
The GOP tax overhaul is now the law of the land. Last month, Bill warned that the tax plan would make the country poorer in the long run. Now, a former Treasury secretary is weighing in with another stern warning.

A Crypto Crash in 2018?
Cryptocurrencies like bitcoin were the big story in 2017. But is the crypto market now headed for a crash? Bill’s top technology expert, Jeff Brown, shows why there could be turbulent times ahead for some cryptocurrencies.

For the first mailbag of 2018, kudos on Bill’s Diary and well wishes for the new year…

Your essays on the Baby Boomer Survival Guide are excellent. Insightful commentary, amusing, and well written. I’m aware of the Catholic ascetic tradition, much of this borrowed from the stoics, of course, but this gives a nice 21st-century piquancy to ancient philosophical insight. I thank you.

Your Christmas series was very awesome. How sad it is that your version of a classic would be viewed as “awesome” when in Ebenezer’s new world, and, indeed, as the norm should be in the world in which we find ourselves, it is but a fantasy. May you and yours survive in peace and happiness.

I just wanted to thank you. My father was always my doomsday advisor. He never provided much in the way of advice and tended to lose everything on gambles with the stock market. You have provided me with insight and knowledge. I know I am on my own, but my pursuit of a life strategy has been seriously impacted by your writings. I have diversified, acquired precious metals, acquired land in remote locations, and slowly lowered my footprint in the stock market. I live a debt-free existence.

You have improved my attitude about survival in a socially turbulent future. If/when things go wrong, my children and grandchildren have a higher probability of survival than they would otherwise have had because of you. I don’t know that I can ever thank you enough, so I will simply say thanks and good luck.

A very Happy New Year to you and yours! And so many thanks for your wonderful letters.

Bill’s top technology expert, Jeff Brown, made some great calls in 2017, including the rise of virtual reality, genetic editing, and even the explosive gains in cryptocurrencies.

Now, Jeff is making his first big prediction of 2018. He says this could be the most profitable tech investment of the new year. Details here. 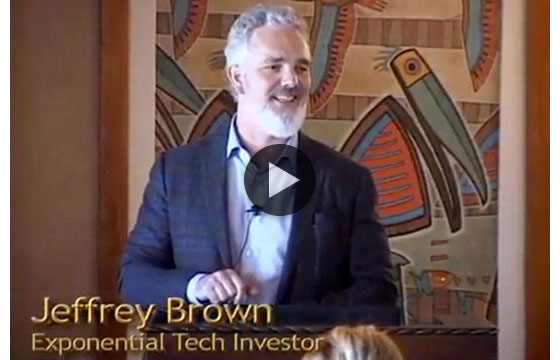