NORMANDY, France – What has happened to TIME magazine?

Henry Luce, who started TIME – the first weekly news magazine in the U.S. – would be appalled to see what it has become.

Vapid, fawning, puerile… sucking up the rich, the pretentious, the cronies and zombies – it is a journalistic disaster.

What brings on this revulsion is an issue of TIME we found in the airport lounge.

It features a photo of the head of the IMF, Christine Lagarde, on the cover and promises to name the world’s “100 Most Influential People.”

Right from the start, the editors are in trouble. Practically every one of the most “influential” people in the world is a celebrity… a hack… or a has-been.

We’re not sure which category she should go into. But since she – like almost everyone else listed in the magazine – is committed to upholding the system and avoiding change… we have a hard time seeing what kind of influence she could have.

At most, her influence is like stomach gas or cockroaches: You get them anyway. Without her, things would be right where they are today.

Ms. Lagarde’s hagiography was written by another champion of the status quo, Fed chair Janet Yellen.

Yellen tells us that “no organization is more crucial to the stability of the global economy than the International Monetary Fund.”

Again, we catch our breath. Stability is a misleading word.

Like the Mafia helps stabilize poor neighborhoods in Palermo… or free heroin helps stabilize addicts… the IMF is meant to keep the system functioning – no matter how much damage it does.

That is the theme running through the 100 top influencers.

Like charitable tax deductions at a billionaire’s get-together, they all claim to be doing good. But there’s no evidence that the ones we know (many, we don’t recognize) have done a single damned thing other than build their own reputations and peddle their influence, not exert it.

Ms. Yellen calls Ms. Lagarde a “trailblazer.” But what trail has she blazed?

The other 99 “influencers” are a mix of entertainers, politicians, yahoos, and monkey shiners.

The common denominator is that they are all people who get their names in the paper.

…Senator Ted Cruz “will not back down from any obstacle that stands in the way of more jobs, greater freedom, and true security for the American people”…

…Novelist Marilynne Robinson “is determined to be as intelligent as possible”…

…University president Diana Natalicio “was ahead of her time, seeing the future of America in the faces of her students”…

…And decades from now, people will look back at Japanese artist Yayoi Kusama’s work and “see that her idea of creation and infinity has an eternal endurance.”

But our favorite claptrap comes from French “philosopher” Bernard-Henri Lévy.

He names French president Francois Hollande as the “defiant European” and claims he should be included among the 100 most influential people on the planet.

Hollande, says Lévy, is “one of the very last European leaders to believe in Europe – that without it, we will go back to the Dark Ages.”

We’re not sure which one we should laugh at first – Hollande or Lévy.

We’ve followed Lévy’s career, from a great distance and with much disinterest, for more than 40 years.

We met him in the early 1970s. He was the leader of a leftist movement called “The New Philosophers.” We thought it would be worth exploring. Alas, we couldn’t figure it out.

We blamed ourselves. Our knowledge of the old philosophers was sketchy, at best; we doubt we could have picked Plato out of police line-up at the time.

So, we assumed it was our fault that the The New Philosophers didn’t make any sense. Now, we’re not so sure.

What makes Lévy think Europe would go back to the “Dark Ages” if the European Union were disbanded?

The E.U. has been around since 1992. Was it really so bad before that?

Not that we recall.

But Lévy doesn’t stop there. He says Hollande is a “great world leader. That’s not an opinion. That’s a fact.”

What kind of a fact is that? And what kind of philosopher doesn’t know the difference between fact and opinion?

Apparently, the kind who thinks Francois Hollande is a great world leader. Or the poor dimwit who is now editing Henry Luce’s once important magazine.

BY CHRIS LOWE, EDITOR AT LARGE

The trend is not your friend…

Today’s chart is of the Vanguard Total World Stock ETF (VT). It invests in over 7,000 stocks of companies located in 46 developed and emerging countries around the world. 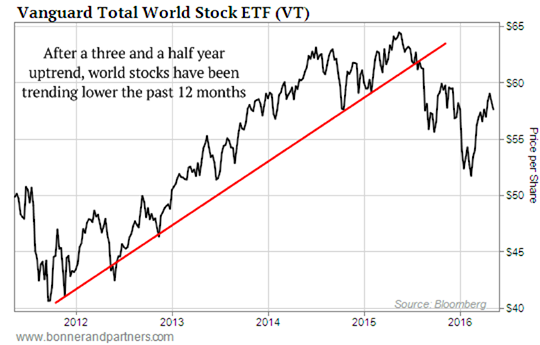 As you can see, it broke below its bullish uptrend in July 2015 and has been heading lower ever since

Resource Investing Expert: My Three Best Gold Picks
In a private interview with Diary, one of the top resource investing experts in the game gives his advice for how to buy and store gold. He also reveals his three best gold stock picks.

Negative Interest Rates: A Tax in Sheep’s Clothing
Mainstream commentators are starting to pick up on Bill’s warning that negative interest rates are a tax on banks. And even economists should know that higher taxes do not lead to higher spending.