Thy love afar is spite at home.

BALTIMORE, MARYLAND – Another week. This one should be slow… with many people off for Thanksgiving.

But you never know.

The old-timers say the days before a holiday are especially indicative of the market’s mood. Traders don’t like leaving themselves in danger while they’re away from their terminals. That is, if they think there is much chance of a crash, they will sell out in advance so they can enjoy the holiday without fear.

Meanwhile, we are back at home after six months abroad. “What’s new?” we ask.

“The charm of ordinary life,” answered a familiar voice.

On Saturday, we attended a memorial service for a cousin, Joe, who died two weeks ago. On Sunday came a christening for a grandchild. One gone. One arrived. Score = even.

“People worry about changing Chinese trade policies… or who will win the Ravens game. They spend their time on their iPhones and computers. Real life goes on around them… and they don’t even notice.

“A man makes a billion dollars in California. A woman wins an election in Arizona. A transvestite in New York sues a museum over its bathroom policy.

“And right here at home, their eyes are shut. We never even met your cousin’s wife.”

We had seen little of Joe over the past 50 years. In the early 1960s, we worked together with our cousins in the tobacco fields – dragooned into sweaty service by uncles desperate for cheap labor.

But in June 1966, we graduated from high school. By September, we had all dispersed – to join the army… to begin careers and families… to go to college… or simply to disappear.

By 1970, at least three of our small circle of friends were already dead. One died of a drug overdose. Another was killed in a barroom brawl. The third died in the war.

But most of us just went about trying to meet the challenges of ordinary life – earning a living, getting married, having children, and getting along as best one can.

And life happened… a half century of it.

The reunion on Saturday was the first of what, surely, will be many. Our cousin died in his seventies… of “age-related” disease.

That is, he did not die prematurely of a heart attack, in an accident, or by medical fluke.

He died as the rest of us will – of something aggravated by something else and set in motion by the wear and tear of time. We are all over 70 now… and all holding a losing hand.

Joe cashed in his chips already.

But there, pinned to the bulletin boards, was the life we never saw.

The photos showed Joe dressed in a tuxedo at his wedding… with his brothers, admiring a motorcycle… at the beach with his two daughters… at a daughter’s graduation… driving a tractor… collecting trash and treasures… at home… on vacation …at weddings and on birthdays…

A whole life recalled in photos. We were in none of them.

We went off to Europe and South America. Joe stayed home. We studied economics and finance. Joe delivered the mail.

“So many people spend so much time worrying about elections and the economy,” continued the familiar voice, looking in our direction. “They miss so much of what is really going on around them in their own families, the things that really matter. We miss a lot… simply because we are not here.”

While We Were Away

The christening of our granddaughter on Sunday drew many of the same relatives as the funeral, but it was a happier occasion… the beginning of a life, not the end.

We gathered at the church in the morning, splashed water on her head, and then came back to the house for a reception. There, too, we caught up with people we had scarcely seen at all in three decades.

Many had grown old since we last saw them – gray hair, slightly bent over… talking of hospital visits.

Their children had grown up, too. Now, they spoke of a new generation… with unfamiliar names.

Life had happened to them, too.

“When did that happen?” we wondered to the familiar voice.

“While we were away,” came the answer. “Ordinary life doesn’t stand still just because we are off on a lark somewhere else. It goes on. We know what we gain from our travels, but we don’t know what we lose.”

U.S. corporate borrowing as a percentage of GDP has more than doubled since 2005…

That’s the story of today’s chart, which tracks the ratio of new corporate loans issued each year compared to U.S. gross domestic product (GDP) – the monetary value of all finished goods and services produced. 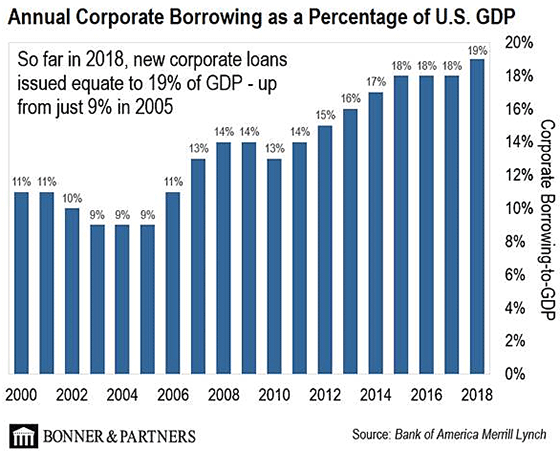 And as we have discussed before, more than $1 trillion of that consists of junk bonds – the riskiest class of corporate debt. What’s more, nearly $3.2 trillion worth of corporate debt is triple-B rated, which is just one step above junk.

In other words, corporate borrowing is growing faster than GDP… and the quality of those loans is decreasing.

And regulatory agencies are starting to take notice…

The Office of Financial Research – the U.S. Treasury’s market watchdog agency – reported that the “rapid growth in leveraged lending is a concern.”

That’s because rates are trending up. These debt-laden companies will be forced to refinance this debt at higher rates. If they are unable to, it could cause a series of defaults that would ripple through both the credit market and the stock market.

What Are They Spending All That Debt On?
As Joe Withrow showed above, corporate debt is exploding higher. But what are companies using this debt for? It’s not to expand operations. It’s this.

Try Before You Buy
Rising rates and recent changes to the tax code that limit deductions for mortgage interest have put a damper on new home buying. To entice more home buyers, new programs are popping up around the country: Give ‘er a test drive.

The problem with him [Greenspan] now – and for a few years – is his Missus, and what that affects at this time of his life. Thanks.

Bill, you write about stagflation. That will probably come, but not for a while. Unemployment is currently very low, at least by government figures. Also, the glut of oil caused by Donald Trump’s policies in the Middle East needs to be worked off to bring energy prices up. Then again, Trump’s tariff threats have caused importers to stock up massively, and that overstock will keep prices of many things low for some time until those stocks are depleted. To some degree, that may happen after the current holiday-buying season ends. In any case, a little later, in 2019, as tariffs on newer imports cause higher consumer price inflation.

I would suspect that, after the holiday buying ends, many employers will lay off not merely temporary help, but some of the regulars as well, as companies seek to cut costs and improve earnings numbers. That increase in unemployment should really begin to make itself felt, again I’d suspect, by mid-2019. This could especially hit places where politicians have mandated higher minimum wages. Employers will require more productivity, or will sometimes replace humans with robots.

Actually, some of it is already showing up in my locale as, while some companies are still hiring, others are laying off and streamlining operations for more efficiency, sometimes even closing local facilities in favor of concentrating operations elsewhere, perhaps with smaller staffs. Or maybe closing elsewhere and concentrating locally, but with smaller staffs in either case. Many of the cuts will be in higher-paid management or supervisory staff, as fewer bosses are needed. Perhaps in six or eight months, we will have the beginnings of stagflation, with higher prices and lower employment.

We are being taking advantage of by our government. We, the taxpayers, the bosses of our government, never voted to give Congress people or any politician a salary, a pension, or insurance. They assumed – wrongly – that they had the right to vote themselves pay rises when we, the taxpayers, are their employers. Therefore, they are all guilty of embezzlement from the American people.

The same with the budget. We never authorized them to go over budget. They did this on their own. Therefore, they have to pay for their mistakes and their crimes against the American people.

It’s time to get rid of Congress. Why are we paying them to vote for us when we can vote for ourselves? This is a joke on us. We are perfectly capable of voting on laws ourselves. It’s time for the people’s amendment – all laws to be voted on by the people of each state. If passed by all states, it becomes national law. Congress needs to be voted out permanently at the state and federal level.

And for the first time in history, millions of Americans will be able to bet on the outcome of the big games.