RANCHO SANTANA – The week went by so fast!

Stocks got a big boost on Wednesday, on news of an impending trade deal with China. Then too, Jerome Powell announced that if anything was going to ruin the party on Wall Street, it wouldn’t be the Fed. Rate hikes are off the table… for now.

And so, yesterday, stocks closed out their best month in two years. But prices are still below the highs of last year… and stocks are still, presumably, in a long-term bear market.

If we’re right about this, your equities will probably decline by 50-90% over the next few years… and take about 15 years to recover, if they ever do.

When the primary trend is down, all you can do is get out of town.

But let’s just look back at what happened this week.

First, as expected, the Fed is backing off its “normalization” program. It had already said it would be “patient” about raising its key interest rate.

Now, it says it will be “flexible” about getting rid of all those bonds it acquired during its quantitative easing (QE) flimflam. Bloomberg:

The Federal Open Market Committee “will be patient as it determines what future adjustments to the target range for the federal funds rate may be appropriate,” the central bank said in a statement Wednesday following a two-day meeting in Washington, opening the door for the next move to also be a cut.

In a separate special statement, the Fed said it’s “prepared to adjust any of the details for completing balance sheet normalization in light of economic and financial developments.” The central bank also said it would be ready to alter the balance sheet’s size and composition if the economy warrants a looser monetary policy than the federal funds could achieve on its own.

In other words, the Fed will not really normalize at all. Flexible? It will fold up like a lawn chair as soon as markets react. Then, if the going gets really rough, it’ll turn around entirely.

Having nurtured the economy on unnaturally low rates for the last 10 years, any move to normal rates will set off a market reaction. Which means, effectively, the Fed has lost control of interest rates and the credit cycle. It can’t fight excess credit with higher rates or a dearth of credit with lower ones.

Sock it to the Rich

Second, the rich are the new pariahs, and Democrats are competing to see who can sock it to them most convincingly.

Ms. Alexandria Ocasio-Cortez has her 70% tax rate. Elizabeth Warren proposed a wealth tax. And then, yesterday, Bernie Sanders piled on, with a higher estate tax. Bloomberg:

Independent Senator Bernie Sanders is proposing to expand the estate tax on wealthy Americans, including a rate of as much as 77 percent on the value of estates above $1 billion.

Sanders of Vermont, who’s considering a second run for president, said in a statement that his plan would apply to the wealthiest 0.2 percent of Americans. It would set a 45 percent tax on the value of estates between $3.5 million and $10 million, increasing gradually to 77 percent for amounts more than $1 billion. The current estate tax kicks in when an estate is worth about $11 million.

Nothing about this is surprising. But we were startled by voters’ reactions. It is remarkable how many want to tax the hell out of anyone who earns more than they do.

But reactions tend to fall along party lines. Democrats are in favor; Republicans are opposed. And therein lies a story that’s almost more startling.

About half of all adults think the country would be fine if the Democrats would just go away. The other half think it is the Republicans who should vacate the premises.

Whichever side they are on, they believe public life is essentially a contest between good and evil, with only two possible outcomes. Either the good guys win… or the bad guys do.

How they know which is which has always been a mystery. But they claim the same gift on a global level.

There, they believe that there is an ongoing battle between the champions of liberty, democracy, and truth… led, of course, by the United States of America… and an Axis of Evil, lately composed of Iran, Russia, Venezuela, Nicaragua, North Korea… and perhaps China, too.

We wish it were that simple. If it were, all we’d have to do would be to identify the “good guys”… and stick with them.

But as we connect the dots, we find lines that wiggle and turn in unexpected directions. There are as many mush-heads among Republicans as among Democrats, for example.

And Putin, Ortega, Maduro… are they really such bad hombres?

We’ve never met any of them. But our guess is that we wouldn’t find them any less intelligent or less honorable than the average member of Congress.

Meanwhile, the public sees no alternative. Red or blue? It must take sides. And the two sides move further and further apart (and yet, closer together… as we will see next week).

Never have the two parties loathed and despised each other so intensely. And never have we agreed with them both so completely.

Editor’s Note: Today, Bill shares a few more photos from his estate on the Nicaraguan coast.

The sun rises on the Pacific coast

The view from Bill’s estate in Rancho Santana

MARKET INSIGHT: GET READY FOR MISTAKE #3

The Fed could be preparing to make “Mistake #3”…

As Bill wrote, Fed chair Jerome Powell just announced that the Federal Reserve will be “patient” with future rate hikes.

That was a sharp turn-around from the Fed’s previous promise of two more rate hikes in 2019… And it signaled that the Fed would pause its rate-hiking cycle.

But recent history shows that the Fed usually follows such pauses with rate cuts, not more hikes.

As regular readers know, cutting rates in a panic is what Bill refers to as “Mistake #3” for the Federal Reserve. And history suggests that it spells trouble for the economy…

Today’s chart tracks the federal funds rate – the rate at which banks lend reserves to each other – from 1997 through today. When you read about the Fed hiking interest rates, this is the rate they are raising. 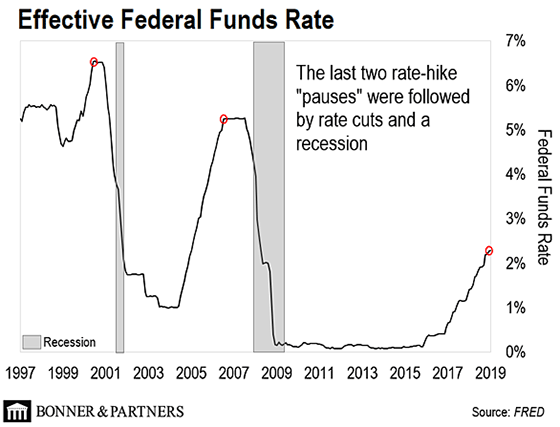 As you can see, the last two rate-hike “pauses” (red circles) were followed by rate cuts.

The most recent rate-hiking cycle was paused back in June 2006… And it was followed by rate cuts in 2007.

Going back to the turn of the century, the Fed paused its rate-hiking cycle in May 2000… And it followed up with rate cuts by January 2001.

The Fed typically cuts rates leading up to a recession hoping to increase borrowing and push up growth. That was the case during the last two periods of rate cuts… but it doesn’t work.

Despite the Fed’s rate-hike pauses… and then rate cuts… in 2000 and 2006, the United States fell into a recession shortly after on both occasions.

If history rhymes, the news this week means we have seen the last of the Fed’s rate-hikes for the current cycle. The Fed’s next move will likely be rate-cuts… not more hikes. But they will come as the next recession rears its head…

Self-Driving Cars Are Here
You may not realize it. Few newspapers reported on it. But a self-driving vehicle recently made a coast-to-coast trip – from California to New York – without a human touching the steering wheel once. That alone is impressive, but it’s what the car was carrying in the trunk that you need to pay attention to…

What’s Venezuela Doing With All That Gold?
In Venezuela, 20 tons of gold is stacked up and ready to ship. Where’s it going? With whom? And why?

Today, a unique mailbag: The Fed’s favorite three mistakes… is Bill a “bleeding heart liberal”?… and a dear reader even wrote us a song…

Well, you asked for comments, so here – I enjoy your newsletter a lot, except that you seem to endlessly repeat your Mistake #1, Mistake #2, Mistake #3 comments. I heard it the first time and I heard it the 25th time.

Now that I’ve got that off my chest, to the real reason for my feedback. I’m a long way from being sophisticated about investing, but it seems to me that if credit becomes more difficult to obtain, that it would, at least initially, result in deflation and not inflation. Since ours is a consumer-driven economy, as credit gets tight, products and assets would become cheaper and not more expensive. If consumers don’t have money to spend and can’t borrow, I would think that prices would be driven lower by lack of demand… or am I missing something here?

Bill Bonner – You’re getting to sound more and more like the bleeding heart liberals Nancy Pelosi and Chuck Schumer, who don’t want to give Trump his wall just to be obstructionist. Years ago, they and Obama were in favor of it. When I think of the billions spent on health, education, and other entitlements afforded to illegals over the years, not to mention all the killings and other felonies committed by them, anything that will stop them should be employed, and a wall in a certain place will certainly act as a deterrent.

Bill, this is a very interesting article, the one on The Wall. From a historic perspective, no walls have ever stopped the barbarians or allowed people within the wall to feel safer over a long period.

I am living in France. I refer to the wall in Berlin and the Maginot Line, mostly. Also, the fortified castles in Europe during the medieval age disappeared with the gunpowder. On a financial dimension, I wonder why such a powerful country as the USA spends $4.4 trillion, but doesn’t find $6 billion to build that Wall. If The Wall is such a priority, the funding could have been anticipated and included in the larger amount. A drop of water in the ocean of federal expenses. Nobody is perfect.

Bill, trickle-down economics hasn’t worked in the past and won’t work now. The people who support the 70% of the economy need to get money to do so. The top 10% don’t spend enough of their wealth to support the general economy. Go AOC!

Just for a little fun, I “edited” this Johnny Cash song below. Reading Bill’s recent entries, I agree that “AOC & Company” are surely coming after you rich guys and you’ll be singing the song below. The melody comes from Johnny Cash’s song, “Folsom Prison Blues.”

I hear that train a comin’
She’s rollin’ ’round the bend
You won’t see the sunshine ‘til
she spends and spends.

You’ll be stuck in debtor’s prison
Time keeps dragging on
But as that train keeps on rollin’
All your wealth goes down in flames.

When I was just a baby
My Mama told me, “Son
Always be a good boy and
Don’t spend and spend.”

But they spent your wad in Reno
Just fore they told those lies
When they send that taxman comin’
You’ll wanna hang your head and cry.