But you always know which way politicians will go; they will take the low road.

Which is why MMT is going to be a big hit in Washington – with both parties.

Recall that MMT (Modern Monetary Theory) states that governments can, and should, print and spend as much money as they want, assuming nothing bad happens.

Buffett, Icahn, and Powell may be bad-mouthing Modern Monetary Theory… but AOC and Bernie Sanders are already on board. And Donald J. Trump is buying his ticket.

First, the president is setting up the Fed to take the fall for the next stock sell-off. It “incessantly lifted rates,” he claims. Then, he will take the lead in solving the crisis by shifting to much bolder fiscal policies. More spending. Bigger deficits.

Earlier this week, Democrats announced that they had worked out a $2 trillion infrastructure program with the White House. That is just the beginning… Education programs. Student debt forgiveness. Rebuilding the military.

No boondoggle left behind!

And yesterday, Ray Dalio, the world’s most successful hedge fund manager, saw it coming, too. Bloomberg:

Central banking as we know it is on the way out, and it’s “inevitable” that something like modern monetary theory will replace it, billionaire investor Ray Dalio said.

The doctrine, known as MMT, says that governments should manage their economies through spending and taxes – instead of relying on independent central banks to do it via interest rates. […]

Central banks might print money directly to finance government programs – bypassing the need to sell bonds. They could buy real estate “which would then ideally be used for socially beneficial ends.” They could also write off debts hanging over the economy, in a kind of “jubilee.” In downturns, they could deliver cash straight to the public, an idea widely known as “helicopter money.”

There are risks, Dalio acknowledged. Such policies would put “the power to create and allocate money, credit, and spending” in the hands of politicians.

And if you’re at the tail end of a credit-fueled bubble… with an overpriced stock market… a trillion-dollar federal deficit… and $72 trillion of debt (total U.S., public and private)… What are you going to do?

Admit that you’ve been a damned fool? Fess up that you’ve made a mess of the economy and that it would have been better just to leave it alone?

Cut spending and drain The Swamp?

Or, come up with some loopy idea that allows you to keep the jig going… and get even more of what you really want – other people’s wealth?

Ray Dalio calls it a risk… that the feds would have the “power to create and allocate money, credit, and spending.” But this shows a profound misunderstanding.

That’s not a risk; it’s a sure thing. And it’s precisely the reason that both Donald J. Trump and AOC will turn to MMT (even though the Republicans may not admit it). MMT gives them a way to squeeze more power and money out of the voters.

Government is always a way for the few to take advantage of the many. It is always based on win-lose deals, not win-win deals.

The feds create no wealth. And there’s no such thing as a free lunch or a stimulus program. So whatever the feds get or spend must be taken away from someone else. MMT provides a gauze of semi-coherent claptrap to cover up the larceny.

Creating and allocating money, credit, and spending is, of course, just another way of telling people what to do and keeping them in line, by cutting them off if they don’t do it.

It’s what the Soviet Union did. And Nazi Germany. And Mao’s China. It’s what all the 20th century’s “isms” – communism, Chavism, Peronism, national socialism, syndicalism, collectivism – did. It’s what all governments do – if they get the chance.

Money is time. Time is life. MMT is just the latest swindle to take it away.

ECONOMIC INSIGHT: THIS IS HOW THE REPUBLIC DIES

Is 2019 the year America’s debt problem spirals out of control at an increasingly faster rate, accelerating us past the point of no return to certain national destruction?

Probably so. This is how the Republic dies. 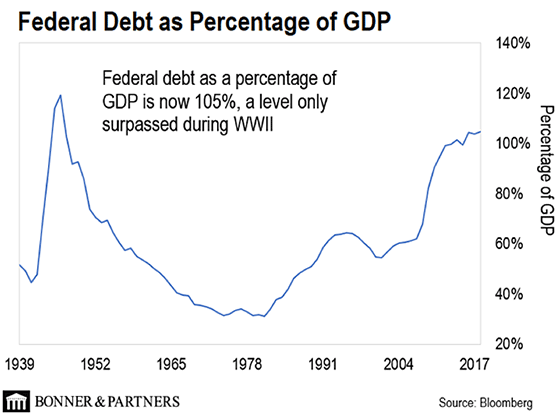 The chart shows that the American public will soon own more government debt than it did at the end of World War II. It comes from a report by the U.S. Government Accountability Office (GAO). The report reaches the following conclusions:

This is like reading that scientists have just discovered an asteroid is headed directly for us. Or a coronal mass ejection from the sun. We know it’s coming. And we know it’s going to destroy us. But we still have a bit of time to enjoy the weekend, so we ignore it.

Some people argue that going into that much debt was worth it to win World War II. After all, the U.S. came out of the war smelling like roses. Investors got their money back and the country won the war. Mission accomplished!

But today? We have a government that’s at war with everything. And the public is going to be on the hook, owning trillions of dollars’ worth of government bonds, issued by a government whose finances are out of control.

What do you think is going to happen to the value of those bonds? The same bonds held, of course, by the Social Security Trust Fund… which brings me to my next chart. 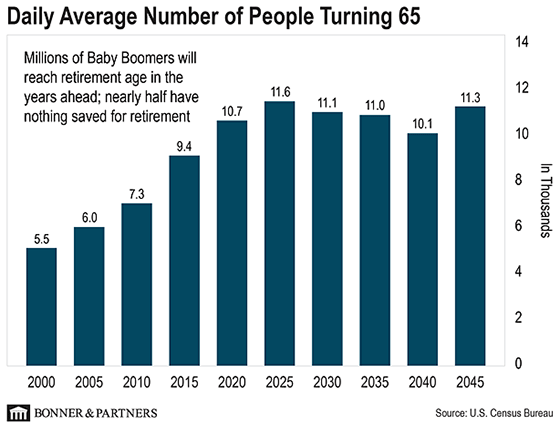 Political pundits talk about a “blue wave” of Democratic voters in 2020. But the real blue wave is the one above (I’ve called it blue because the chart is blue, but you could just as easily call it “grey” to reflect the ageing of the boomers).

The number of baby boomers retiring every day is headed up. It will peak in the next five years but remain high until 2045. Yet, a recent report suggests that 45% of the 76 million baby boomers have ZERO retirement savings.

“People come to believe what they believe when they need to believe it,” Bill has said. Boomers who have no retirement savings, but DO have a vote and are eligible for Social Security, will have NO problem with a wealth tax.

Not just a tax on your dividends or capital gains. But on your net worth (of course, the scale will be progressive… 1% near the bottom and 10% or higher near the top).

Or what about means-testing Social Security benefits? If you have the means to self-fund your retirement because you’ve saved and invested, then you don’t really NEED supplemental income insurance, do you? And even if you think you do, or that it’s your money, your country needs it!

Again, I don’t mean to scaremonger about Social Security. But America’s fiscal house is in disarray. It would be hard to pay all the coming entitlement bills, even if the debt weren’t rising (it is, by about $1 trillion a year), and even if the interest paid on that debt wasn’t about to get more expensive (it will, with higher interest rates).

There is NO chance the bills can be paid without new taxes. Or a brand-new monetary regime.

P.S. What would a brand-new monetary regime look like? I believe I might know. Call it socialism. Call it Modern Monetary Theory. Call it the death of win-win capitalism. It’s all the same thing. And it’s coming faster than most think. Full story here.

Should the Fed Get Out of the Way, Already?
As Bill said yesterday, normal Fed policy allows markets to correct. And after the Fed left its key rate unchanged at its May 1 meeting, some are left wondering if another market disaster is imminent. Well, one business mogul thinks the Fed “should get out of the way”…

“It’s Not Just Amazon (Well, You Need to Be Scared of Them, Too)”
When it comes to Big Tech, it’s easy to label an “Amazon,” or a “Facebook” as the problem. But the changes that are happening in technology are much bigger than any one company. And with new immersive technologies just around the bend, we haven’t seen anything yet…

Here’s Why You Must Have Cash

While trading strategies aren’t our go-to beat in the Diary, plenty of readers are wondering “what now?” With markets like these, master trader Jeff Clark thinks readers should follow one simple rule: Have some cash.

Today, a mixed mailbag. What’s wrong with “Social Insecurity,” the distorting of capitalism, and why “America deserves what is coming”…

Bill, from the outset, there was only three things wrong with the Social Security Trust Fund. They are:

Social Insecurity was the “Modern Monetary Theory” of 1935; at the height of the introduction of Marxist philosophy into the bankrupt de facto corporate government. Twenty-two years earlier, the 17th amendment had already ensured that we would always have, “The best government that money could buy.”

Dale A. got too carried away in the mailbag section when he lambasted corporations as avaricious and for leaving America because – to stay in existence – they needed less-costly labor. If the alternative is going out of business, then what would Dale A. have them do, otherwise? And if they have a lot of cash that they can’t put to productive use, then why shouldn’t they reward their risk-taking owners (i.e., shareholders) by buying back their stocks?

U.S. corporations are playing the cards they were dealt by our federal government, which, as Bill reminds us, lost its way in 1971, when it cut the last string tying our currency to gold and began distorting capitalism, the only wealth-creating system known to man, in earnest.

Your shady character explaining how financialization works to the kid with the lemonade stand had me alternating between laughter and grinding my teeth in rage. I double down on what I said regarding the coming of the inevitable financial collapse: America deserves what is coming… The corporations and Wall Street deserve to come crashing down in flames.

Bonner & Partners chief tech analyst, Jeff Brown, has uncovered an industry that could be worth $1 trillion within the next decade… making it seven times larger than the entire cancer drug industry.

And according to Jeff, there are just three companies that hold all the necessary industry patents. Once these stocks explode, early investors could make a fortune.

This could be your chance to multiply your wealth several times over the next 12 months. But act fast… this offer ends soon. Read on here. 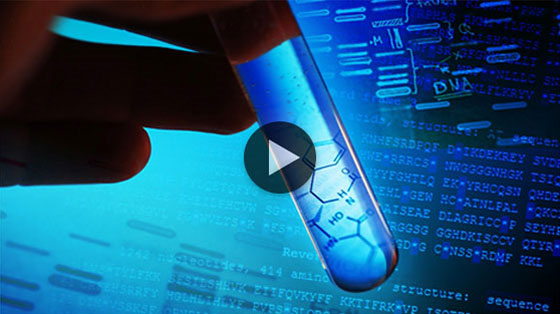