We join with all Americans today in breathing a sigh of relief; justice is being done.

The bad guys are being hunted down. Our pristine democracy – in its pure white, unblemished, unsullied, and unbelievable gown – is being protected.

Finally, at least one of our foreign enemies has been nabbed by the gendarmes and will soon be railroaded by the courts; others will surely follow.

The perp is Russian national Elena Alekseevna Khusyaynova. The feds claim she is responsible for overseeing the funds for a Russian conspiracy to meddle in U.S. elections.

And now, too, Donald Trump and Mike Pence are after the Chinese, who – as we just learned last week – are also trying to subvert the will and wisdom of the American people.

More on both of those stories in a minute…

We’re back in Ireland after a week in Bermuda. It wasn’t a vacation. Instead, we got together with old friends… and the whole team of researchers and analysts who work with our Legacy Research Group.

We also met TV personalities Glenn Beck and John Stossel, and listened to two days of speeches and panel discussions.

We gave you a version of our speech on Friday, as we had prepared it. But as we listened to the other speakers, we revised and rewrote… to address the issues raised by other speakers.

And as we revised, we began to see more clearly how the pieces fit together. More about that tomorrow… along with our takeaways on cryptocurrencies, pot stocks, gold, commodities, and much more…

But today, we begin the week by looking at the latest news. From Reuters:

U.S. President Donald Trump on Wednesday accused China of seeking to meddle in the Nov. 6 U.S. congressional elections, saying Beijing did not want his Republican Party to do well because of his pugnacious stance on trade.

Yes, America’s president says China’s got it in for him. No details were offered, however.

We were left to wonder how the Chinese might meddle… Would they send out fake news? Or true stories?

Or was the whole “Chinese meddling” idea a form of fake news itself, intended to… well… meddle with the next election results?

The whole idea of interfering with the U.S. elections takes our breath away. Every clown on the planet interferes. One writes a letter to the editor. Another posts something silly on the internet. A third makes a campaign contribution.

Fantasy, prevarication, and confusion – that’s what elections are all about!

And while the experts have been unable to find any traces of Chinese meddling, in the case of Russian meddling, they say they have more smoking guns than at the Battle of Gettysburg.

And on Friday, the federales finally collared a Russian woman, a U.S. resident – the above-mentioned Khusyaynova. The papers summarized the charges against her as – are you ready for this? – “information warfare.”

What exactly is information warfare? A capital crime? A misdemeanor?

Is it when you drop propaganda from bombers? Or is it like Radio Free Europe, where you send messages to citizens of other countries to try to give them a second opinion?

Frankly, we didn’t know there was a law against it. Au contraire, we thought it was protected by the First Amendment.

Nevertheless, Reuters reports that the G-men grabbed the desperado and are preparing to perp-walk her right to jail:

Elena Alekseevna Khusyaynova, 44, became the first person charged with a crime for attempting to interfere in the 2018 U.S. elections, according to a government official with knowledge of the investigation.

Maybe the crime busters got the wrong person. As near as we can tell, the biggest interferer – apart from the candidates and the political parties themselves – is casino mogul and Israeli citizen Sheldon Adelson.

The Huffington Post put Adelson’s spending on the 2012 race at $150 million. And Bloomberg reports that Adelson is responsible for donating more than $100 million to this year’s midterms alone.

The money keeps flowing… from the poor punters putting their quarters in Adelson’s Las Vegas slot machines to the rich politicos inside the Beltway.

Compared to the money Adelson spends, the Russkies’ budget (reported to be $10 million for all of 2018) is pathetic.

And the papers reported over the weekend that between them, Republicans and Democrats have on-hand some $623 million more to spend on this year’s midterm races – every penny fully intending to upset the results.

It was as if the Internal Revenue Service announced a crackdown on Wall Street tax evasion… and arrested a kid with a lemonade stand on nearby Beaver Street just to let everyone know it was serious.

And here, we stand up in support of what is right, fair, and virtuous. That is, we stand with the meddlers. If Adelson and other meddlers want to spend their money getting some pliant jackass elected – well, that’s the American way!

But the Russians are wasting their money. According to the press reports, they used “fake personas on social media to stoke arguments about race and other contentious issues.”

But wait… When did it become a crime to use a nom de plume? And how is stirring up controversy different from what shock jocks, provocateurs, telephone callers, presidential candidates, and practically everyone else does?

But let’s look more closely… Maybe we’ll see what this is all about.

Using social media and other avenues, the Russians are waging “information warfare against the United States,” to sow distrust in the political system, according to the complaint…

The complaint included Facebook and Twitter posts that were both critical of Republicans and supportive of President Donald Trump. One post in March, for example, suggested Trump deserved the Nobel Peace Prize for his negotiations with North Korean leader Kim Jong Un aimed at denuclearization.

Well… whoa, again! Are they serious about this? A Nobel Peace Prize for The Donald may be absurd. But it’s hardly illegal.

As for spreading distrust, even we, in our own small way here at the Diary, try to do it every day. That is, we try to connect the dots, revealing the public spectacle of D.C. and Wall Street; readers can draw their own conclusions.

But we’re no match for the president. He’s the master of sowing discord and distrust. Other members of Congress aren’t bad, either.

And what about Pocahontas? Elizabeth Warren says she took a DNA test to “restore trust in government.”

Neither the Russians nor the Chinese will do better than that.

According to one of Wall Street’s biggest banks, there is a 65% chance of the U.S. entering a recession by 2020…

Today’s chart comes from a JPMorgan report, which seeks to time the next U.S. recession by tracking six economic indicators and projecting their future trajectories.

Those indicators are: the unemployment rate, the unemployment gap, compensation growth, prime-age male labor force participation, the margin drawdown from the five-year peak, and the durables and structures share of GDP. 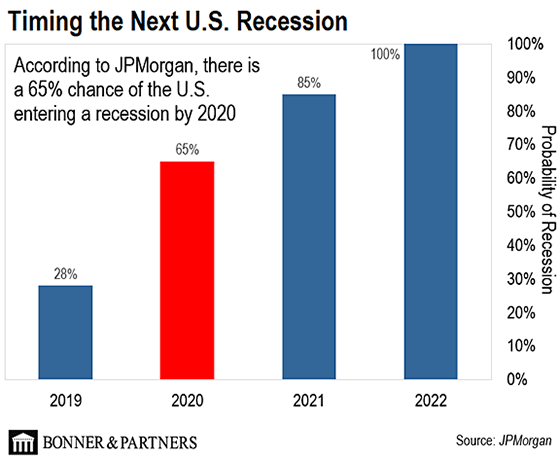 Among the six indicators JPMorgan used in its report, it listed prime-age male labor force participation, the unemployment rate, and the unemployment gap as the three with the most concerning trajectories.

They expect the unemployment rate and the unemployment gap – the difference between white male and minority unemployment – to increase in the coming years. And they expect prime-age male labor force participation – the percentage of men aged 25 to 54 who are actively employed – to stagnate.

Here at Bonner & Partners, we are often accused of only looking at the glum side… But it appears we now have company. The spirit of JPMorgan’s recent recession report is similar to that of Bill’s Doom Index, though we’re tracking a more robust set of indicators.

We’re compiling data from last quarter, and we’ll provide a full update on the Doom Index in the coming days.

How Saudi Arabia Bankrolls American Companies
The government of Saudi Arabia is suspected of assassinating the journalist Jamal Khashoggi. Americans are appalled. Many American businesses have vowed to no longer do business with the country. There’s just one problem: Saudi Arabia has bankrolled some of Silicon Valley’s most famous companies…

Welcome to “Full Employment.” Can Somebody Let the Economy Know?
The official unemployment rate recently hit 3.7%, the lowest level in almost 50 years. This should be cause for celebration. So why isn’t the economy celebrating?

Accurate! The global elite has also now found the ideal enemy to fight by all means (read: exploding global debt). No sacrifice is too much (running debt) to fight global warming! According to the Intergovernmental Panel on Climate Change (IPCC), mankind has now to do everything or anything to avoid an increase in global warming within one to five degrees by 2030. Otherwise, a real climate catastrophe is to be expected. This is the new religion by the global foxes. President Trump almost appears to be a fresh wind in this climate.

Clearly, it is a “Republican problem,” for they are in charge. Ron Paul said he could cut the budget by a trillion dollars the first year from the executive office, without violating the Constitution. If he could, Trump could also, but clearly, he is not inclined in that direction. Thus, we are bankrupt. (Or will be soon.) Mnuchin helped do it to Sears, and now, he’s working on the entire country.

You say tax revenues declined and the deficit rose. And the national debt went up by more than $1 trillion over the last 12 months. Sean Hannity says the revenue went up. So what’s the story, Morning Glory? The debt is a bipartisan issue. That’s plain to me. It takes two to tango. And these foxes are not so clever, since they’re all wet now and snarling at everything within their grasp…

China is opening the largest factory in world history. Its sole purpose is to produce one specific device – the same device that’s set to power the 21st century.

It requires an enormous amount of raw materials – as much as 1,073x the world’s current stockpile – every single year.

The companies that supply these materials to China are about to be in high demand – in fact, one small company could have its entire deposit bought out, shooting its $1 stock through the roof. 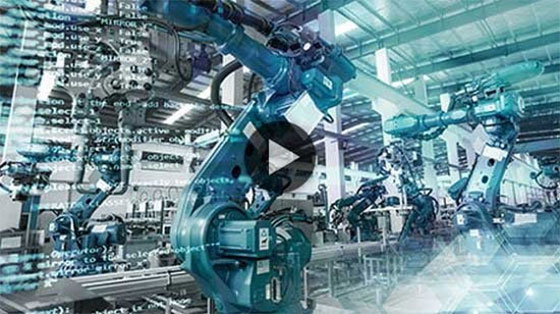