BERLIN – Yesterday, we saw the past, the present, and the future… all stumbling over one another.

On the march were the mistakes of the past 20 years – funded by trillions in fake money flushed into the markets by central banks worldwide.

The headlines, however, ignored the past and looked at the present. The markets were falling, with an 800-point drop in the Dow.

And then, there was the future… Donald J. Trump explained what was going on:

Actually, it’s a correction that we’ve been waiting for for a long time, but I really disagree with what the Fed is doing…

I think the Fed has gone crazy…

The problem [causing the market drop] in my opinion is Treasury and the Fed. The Fed is going loco and there’s no reason for them to do it. I’m not happy about it.

Trump is on the move, too. He’s pointing his finger at the Fed, preparing to make it the fall guy, while he sets up a whole new round of claptrap “stimulus” to distort markets and put off the reckoning with the past.

Beginning of the End

But let us begin with the Dow. Does this 800-point drop mark the beginning of the end of the boom?

We don’t know. But it hardly matters. Because what we do know is that the end is coming. Booms don’t run out of money; they run out of time. And time can’t be cheated, stretched, or “printed” by the Fed.

Even a healthy boom – sustained by rising output, sales, incomes, and profits – runs out of time. Mistakes accumulate. They need to be corrected.

But this was never a “healthy” expansion – it was funded by stealing from the future. That is to say, it was made possible by some $250 trillion of worldwide debt borrowed at artificially low interest rates.

Here is the reality, from The Hill:

Almost two-thirds of Americans polled say they haven’t seen an increase in their take-home pay as a result of last year’s Republican tax-reform bill, according to a new survey.

A Gallup poll published Wednesday found that 64 percent of respondents said they haven’t seen a raise in their take-home pay as a result of reduced federal income taxes. That finding is identical to results in Gallup’s February/March poll taken shortly after the tax changes went into effect.

The boom, in other words, is a fraud.

It was bought and paid for with $4 trillion of fake money created by the Fed… and a total of about $20 trillion from central banks all over the world over the last 20 years.

The tax cut, too, was essentially fraudulent. Without a spending cut, the lost tax revenue had to come from somewhere…

The money spent to “stimulate” the economy today was taken from tax revenues, which must be covered by loans – to be paid off tomorrow. That extra borrowing has pushed up interest rates, which now threaten the whole tower of bling.

Yesterday, today, and tomorrow come together in the credit markets. Yesterday’s savings (theoretically) are lent at today’s interest rates, to be paid back with tomorrow’s income.

As the weight of yesterday’s debt increases… and the expectation of tomorrow’s income declines… the universal joint of interest rates goes haywire.

After 36 years of lower yields and higher bond prices, Treasury yields bounced off a bottom in 2016. Today, the benchmark 10-year U.S. Treasury yields almost 200 basis points more than it did at the bottom.

This is a new world for most people. Americans haven’t known a real bear market in bonds since 1980. In other words, a whole generation has grown up in a fake world of falling interest rates, as if easy credit terms were just the way of the world – like gravity and the TSA.

But gravity is real. And so are bear markets in bonds. Falling interest rates have only been a fact of life for the last 38 years. Before that, interest rates were going up!

The last bear market in bonds took us from 1946 to 1980 – about a generation in length. By the time it was over, you could buy the entire Dow for just one ounce of gold… and six times earnings. Mortgage rates were over 12%, and the Fed had boosted its key interest rate to 20%.

In short, if this new bear market in bonds was allowed to play out as usual, there would be hell to pay.

You could, for example, expect to see the Dow at 10,000 or less… house prices cut in half by higher mortgage rates… and as much as $30 trillion in ersatz U.S. wealth wiped out.

But remember, we’ve glimpsed the future as well as the past and the present. The Trump team is already preparing to step in – with the collusion of Congress and the Fed – to prevent a bond bear market.

Instead, they will stifle the correction… and make things much, much worse.

Today, something a bit different for our market insight.

As we march ahead through Q4, we look back and record the sectors that were the biggest winners and losers of 2018’s third quarter… 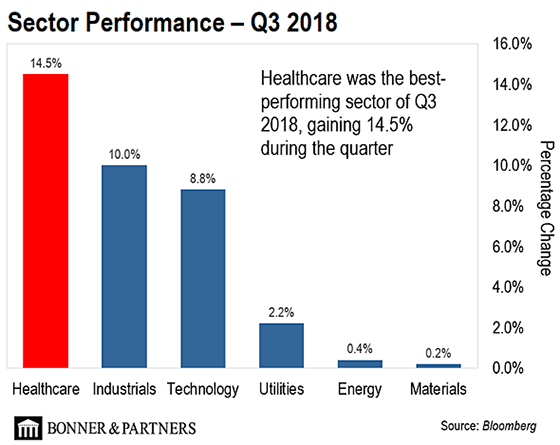 As you can see, Healthcare was Q3’s best-performing sector. As measured by the Health Care Select Sector SPDR ETF (XLV), the sector returned 14.5% in the third quarter.

This was followed by Industrials and Technology, which returned 10% and 8.8%, respectively.

On the other side, Q3’s lowest-returning sectors were Utilities, Energy, and Materials. These sectors returned 2.2%, 0.4%, and 0.2%, respectively.

Jeff Bezos Just Lost $10 Billion
U.S. stocks plunged yesterday, marking the second-steepest one-day fall for 2018. This hit U.S. markets hard, and knocked nearly $100 billion off the net worth of some of the wealthiest billionaires…

The $80 Trillion World Economy in One Chart
The most recent estimates put world GDP at $80 trillion. The U.S. makes up roughly 25% of that figure. How does the rest of the world stack up? See here…

How Trump Takes on Big Tech
Recently, President Trump accused Silicon Valley giant Google of “rigging” search results to stifle conservative-leaning viewpoints. Google denies the claim. But now, Big Tech is squarely in the crosshairs of the Trump administration. Here’s how the showdown might shake out…

In the mailbag, dear readers greet the ghost of Sam Ervin…

I couldn’t agree more with your article! Thank you for saying what I was thinking throughout this wearisome spectacle. Where, oh where, is redemption? Bless you for stating what should be the obvious. Too bad nobody in those hearings was up to the task.

I always enjoy your articles… some tremendously, and some less tremendously. This one, sir, is an extremely fine piece of work. Please accept my sincere thanks.

Bravo for the Sam Ervin style of questioning. You covered the exact points I wondered why no one mentioned during all of the spectacle. I call it the “young-and-dumb” phase that most all humans go through – it’s the part where you learn the hard way. And I believe these things should be looked at in the context of the times in which they occurred.

Finally, we need to recognize that most people grow and change, and become better humans, as they age. To think otherwise leaves no hope for humanity. Forgiveness is the greatest tool for moving on.

Bill, I generally enjoy your musings and points of view, but this time, I’m afraid your memory is far worse than Dr. Ford’s. You must have forgotten that she named Kavanaugh as her attacker a couple of times, years before he was nominated to SCOTUS by the Buffoon. You must have also forgotten that she passed a lie detector test and asked for an FBI investigation (a real one, mind you).

And you must have forgotten that Kavanaugh clearly evaded and outright lied to senators during these recent hearings – and, it turns out, in prior hearings for his earlier appointment to the Court of Appeals. And you must have missed – because who can forget? – his dry, drunk-like outbursts and silly conspiracy talk after Dr. Ford gave her testimony.

The man is simply not fit – unless you just need a tool to put through some kind of agenda. So I’d be happy to bet you table stakes that old Sam Ervin, a smart and patriotic Democrat to the end, would certainly not have overlooked all those disqualifying, salient points.

Today, I’d like to help you pour icy water over the fools in the U.S. who incessantly preach that “it can’t happen here!” Back in the dark ages (we’re about the same age), I took a class in political science that addressed the many philosophical and practical approaches to government that have been tried by our ever-so-creative species. Well, we had to write a paper at the end of the course, and I picked Argentina to write about. At one point, the Argentine Constitution was so close to the U.S. Constitution that the Argentine Supreme Court actually used SCOTUS’ opinions when performing its own deliberations!

As you have implicated, Argentina is a crystal ball that allows us in the U.S. to see our future! I don’t think Trump is our Perón, so we still have some really exciting times to look forward to. Oh boy, oh boy… Oh crap!

Something strange is happening at the highest levels of Wall Street…

Insiders are talking down cryptos while buying them hand over fist behind the scenes.

Cryptocurrency expert Teeka Tiwari calls it “The Great Crypto Conspiracy.” To get all the details, and to see when the next bull market in cryptos is likely to take off, go right here. 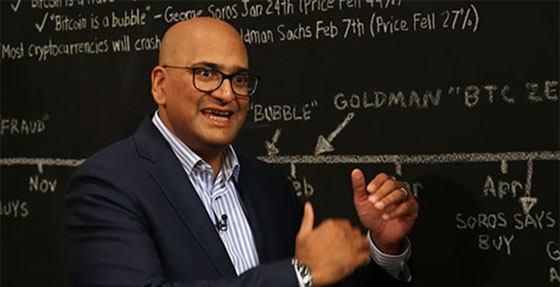