BALTIMORE – Last week, we attended a conference in Miami. Several crypto enthusiasts were there… including Teeka Tiwari and our own “in-house” expert, one of our sons.

The price of bitcoin has fallen from a high of around $20,000 to about $8,000 today. That kind of a fall would knock the wind out of most investors. But the bitcoin bulls are still surprisingly bullish.

“This pullback is very healthy,” said one speaker. “There were so many bad deals in the initial coin offerings (ICOs – similar to initial public offerings, but with cryptocurrencies instead of stocks). Some of them were just absurd. And people who bought into those deals deserved to lose their money.

He could be right. Bitcoin seems to have found its footing in the $6,800–$7,000 range. Thereafter, it began a modest recovery.

“It didn’t. Instead, the market discovered firm ground in the $7,000 area… which is a lot more than zero.”

What the market may have discovered is that bitcoin has a value as, well, bitcoin. When financial chaos strikes, gold holds its value… and bitcoin goes up.

Geezers on the Internet

“When you are in a crisis, it can be hard to get gold,” explained another of the cryptophiles. “The dealers don’t want to trade gold for local currency; nobody does. Gold tends to disappear…

“It’s just Gresham’s Law at work. Bad money drives out good money. And usually, people are trapped. All that’s available is bad money. That’s the whole idea – to force people to use paper currency that is losing its value. That’s what is happening in Venezuela, for example, right now.”

We turned to The Christian Science Monitor for confirmation:

In the midst of a financial crisis with inflation nearing 2,000 percent, Venezuelans are using bitcoin to pay for groceries, medical bills, even honeymoons. Unaffected by the economic crisis, bitcoins give users an alternative to black market worthless government currency.

“This is not a matter of politics,” [local Venezuelan] Mr Villar said. “This is a matter of survival.”

Our boys bought bitcoin and other cryptocurrencies back in June 2017, against their father’s advice.

The old man has waited for an “I-told-you-so” moment ever since. But it hasn’t come yet. In June, bitcoin was selling for about $2,500. Even after suffering a 60% drawdown, it’s still three times what they paid for it.

“Hey Dad, remember when you introduced your readers to bitcoin… two years ago? You and Vern Gowdie tried to buy it. You got that young French girl, Claire, in the Paris office to help you. You made a video of it. I think the title was something like ‘Geezers on the Internet.’”

“Between the three of you, you couldn’t figure it out.

“Well, if you had been a little more tech-savvy, you would have made a lot more money. The price of bitcoin was just $500 back then. Now, it’s 15 times that much.”

The crypto market is no stranger to big numbers. Filecoin raised $187 million in one hour in its ICO. Ark – a “blockchain platform” – went up 1,000 times. Nano, whatever that is, rose 3,747 times, transforming an initial investment of $500 into $1.8 million.

And there may be more big gains coming in the crypto space. Very, very few people own cryptos. They represent a tiny percentage of money transactions.

The experts tell us that most owners have what they call, derisively, “dust,” – very small holdings. They imagine, say, 5% of the world’s transactions being enabled by bitcoin, which might increase today’s price by 100 times or more.

We offer no opinion of our own. All we know is that there’s something going on… something more than zero.

But whether any particular cryptocurrency will go up or down, we have no idea. So we pass along the comments of one of the enthusiasts:

“Look… we’re still in the very early stages. Money is already mostly digital. And paper cash is disappearing. It makes sense that new forms of digital money arise… and some will catch on.

“They will flee to bitcoin and other cryptos… and they will protect their wealth. That’s what real money is supposed to do. And that’s what bitcoin does. That’s what makes it valuable.”

Editor’s Note: As Bill mentioned, bitcoin fell hard to start the year. But as the cryptocurrency begins to recover, some are predicting a second major run. Teeka Tiwari, who Bill mentioned at the top of the Diary, recently claimed that bitcoin would hit $40,000 by the end of the year.

If you’ve ever wanted to invest in cryptos, now might be your last, best chance. See how to get started here.

The coal industry has been left for dead…

That’s the story of today’s chart, which maps the Dow Jones U.S. Coal Index from 2008 to today. 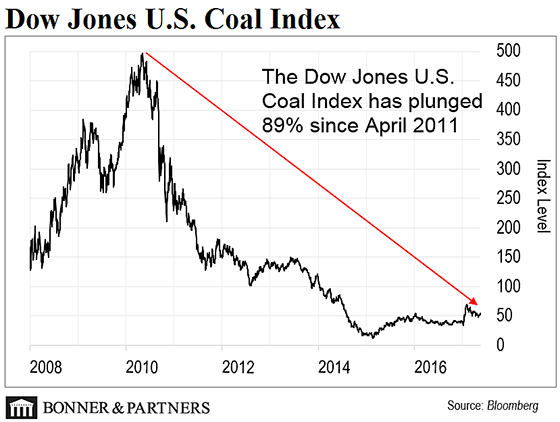 The Dow Jones U.S. Coal Index – which tracks all stocks classified in the coal subsector trading on major U.S. exchanges – has plummeted 89% since April 2011. That makes coal the worst-performing subsector over the last seven years.

By comparison, the Dow Jones Industrial Average has risen 88% during that time.

The Amazonification of America’s Universities
Online retail giants like Amazon have changed the retail industry forever. As brick-and-mortar stores lose favor, some wonder if the same thing could happen to America’s colleges.

Is Your Chinese Phone Spying on You?
Yesterday, the U.S. banned American companies from selling components to Chinese telecom company ZTE Corp. But this isn’t the first time America has blocked Chinese tech companies from doing business with the U.S. And the reason may surprise you…

Don’t Fall for These Crypto Scams
As Bill mentioned, there are still plenty of shady characters in the bitcoin space. Easily avoid crypto scams by following these simple steps.

Today, a mixed mailbag with talks of debt, deficits, and Trump’s deal with the Deep State…

You seem to not understand or consider how two forces are in opposition to each other: quantitative tightening (QT) versus budget deficits. If the Fed is going to achieve QT of $600 billion a year, then that theoretically gives them more lending capacity in the case of a market crash. Then, budget deficits, along with higher interest rates, are not as difficult to endure because they’ll have room to do QE (quantitative easing) and raise interest rates again.

To what extent? Now, that’s the question! Jamie Dimon already wrote about how the Fed will have to “do something” (since he’ll be wanting more cheap borrowing capacity again). And Jim Rickards has mentioned how interest rates have limited hiking potential! So there you go!

When debtors pay an extra $2.3 trillion in interest expense each year, investors receive an extra $2.3 trillion in interest income each year. The “world economy” remains in balance. As long as investors are willing to let the interest accrue or accept fake money as payment, the debt expansion will continue. There is no question that if the debt and interest had to be repaid in gold (or any other tangible asset), there would be no further expansion of debt, except that supported by the production of tangible assets.

Regardless of all the rest, one point. What is this sentence based on?: “As it turned out, the gas attack was most likely fake.” With all due respect, I feel that statements like this, with no real backing, undermine and discredit the much bigger and more important message.

Hi Bill, the fundamental problem with President Nixon removing the dollar from the gold standard is that it eliminated the restraint on Congress. Before that action by President Nixon, Congress could not spend what it did not collect in taxes plus what it borrowed. The money which Congress borrowed (in large part through bonds to the American people) was limited by the available money supply in the economy. The available money supply in the economy was limited by the amount of gold the government held. Thus, there was a check on congressional spending. After Nixon, the limitation on congressional spending was eliminated. And like any child with unlimited funds, the government has not stopped spending. Since the taxes Congress receives are limited by the income the taxpayers earn, Congress has borrowed the additional money it spends without regard for the consequences.

As you have stated, the industries which feed from the government trough, particularly the military-industrial complex, have encouraged spending and borrowing. Their marketing campaigns are becoming increasingly effective. The “rally around the flag” theme is truly a perpetually stirring reason to spend and borrow. As an example, if you are a bomb maker and no one is dropping bombs, then your inventory is not used. You need the U.S. to drop bombs somewhere so the U.S. will order new bombs and you can keep the factories open and the employees paid. Thus, patriotism is not only a feel-good activity; it becomes a marketing tool to produce income. Every malicious event worldwide becomes another reason for the U.S. to drop bombs. The industries which feed from the government are major congressional supporters, guaranteeing that the spending continues.

Meanwhile, another reader picks up a thread…

I would like to respond to the reader who offered, “In all fairness, [Bill] should also point out that President Trump does not direct the FBI to grab American lawyers, like Robert Mueller, and make them disappear forever. He doesn’t put people related to Americans who oppose his views under house arrest, or eventually make them disappear as well. He does not run slave labor shops. And so on.”

No, Trump does not do those things to Americans. Why? He seems willing. He does those things to people from other places, such as refusing to close Guantanamo. Due process for all people is an inalienable, self-evident right. He shoots people from the air, destroying property (similar to the way he used eminent domain before his election). The slave-labor party will probably happen later to subsequent generations paying off the debt (though it’s also possible that debt will vanish with our savings when the dollar goes to zero).

Neither does he respect the right of Americans to be represented in war decisions (he’s supposed to check-and-balance Congress when it doesn’t have a backbone). And he second-guesses our business and consumer decisions, using force to control us. He hasn’t taken Snowden’s offer to come back and be tried in court, and has advocated murdering him. Is he really better than Xi? Or is it that the American people are well-armed and the Chinese people are not?

Secret societies are nothing new…

Some estimates say there are over 600 secret societies in the U.S. Most of them are harmless. But Dan Denning, Bill’s coauthor on The Bill Bonner Letter, recently identified an unseen group right here in America. And what they have planned for the country may shock you. Read the full story here. 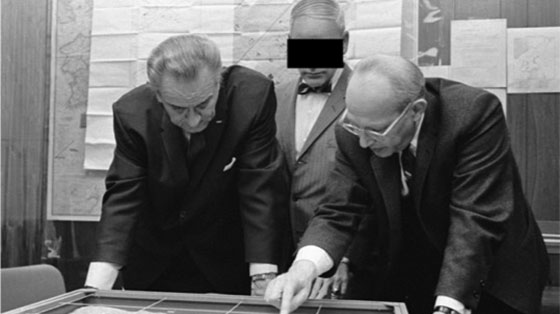