POITOU, FRANCE – Investors chose to look at the half-full part of the glass yesterday.

Our suggestion: They should look more closely.

In the empty part of the glass were the trade war… the deficit… the Fed’s QT (quantitative tightening)… rising interest rates… bubbles everywhere… the growing dark power of the Deep State… the approaching stock market crash… the coming recession… the Kardashians… the inevitable bankruptcy of the U.S. government… Mike Pence…

…the increasing number of people driven to madness by the headlines and turned into mass murderers, and even more who are so depressed by the claptrap that they can think of no better remedy than to slit their own wrists…

…the passing of the summer solstice (with shorter and shorter days from here until the 21st of December)… and the fact that they are getting older and fatter… and will all die in a few years.

In the full part, on the other hand, they found what they were looking for: GDP is supposed to be growing at almost 4% per year… unemployment is just above a 50-year low… Brexit will be “soft”… the trade war will be polite… the Canadians are on the run… the Chinese are backing down…

…the new Supreme Court justice will be a won’t-rock-the-boat insider… homeowners have a record amount of untapped equity… their summer vacations were coming soon… and they were getting better looking every day.

Stocks closed sharply higher on Monday as bank shares rose, while concerns over a trade war between the U.S. and key partners dissipated for the moment.

Markets are always looking at the glass, measuring one half against the other. Investors are always trying to guess whether the glass is filling up or emptying out.

But here at the Diary, we’re suspicious. “What’s in the damned glass?” we wonder.

So let’s empty it out on the table and have a look.

Is unemployment really just shy of a 50-year low? Not really.

The labor force participation rate – the percentage of the working-age population employed or looking for a job – has been trending downward since 2001. From a peak of 67% at the dawn of the new millennium, the participation rate has dropped to about 63% today.

And real, full-time, family-supporting jobs – such as desk jobs and those in manufacturing or mining – have increased during the 21st century, but only at about a quarter the rate of growth in the workforce.

The slack was taken up with part-time gigs, or jobs in “soft” service industries – such as taking care of old people, parking cars, or flipping burgers.

Nor has there been any significant change in the unemployment picture since Donald Trump was elected. The trends remain the same: more low-paying jobs, fewer good ones.

The result? The typical man has less real spending power than he had at the beginning of the century. He has to borrow more and save less just to stay in the same place.

That’s why today’s savings rate is around 3% – near a record low. And household debt is at an all-time high, even higher than it was in ’07.

And what about GDP growth? Is the economy really booming? Nope.

Economists are betting that the second quarter will be good – with growth maybe even over 4%.

But single-quarter readings are useless. One quarter during the Obama years showed GDP growth at 5%. Another “printed” at over 4%. Later, both regressed to the mean.

The economy has been slowing for at least 30 years. Our hypothesis is that it is being held back by age, debt, regulation, and the Deep State’s win-lose deals.

And if we look at un-fake indicators – those that can’t be diddled, such as final sales, Social Security, and income tax receipts – we see that the drag continues. None of these measures show a break from the trends of the Obama years.

Isn’t there something in that half-full glass to make America great again… or at the very least, to make stocks more valuable?

Perhaps stock market investors see something we don’t. But all we see are cheap tricks, scams, and black magic.

The tax cut, for example, does not seem to be stimulating the economy at all. Instead, as expected, most of the corporate tax savings is going into share buybacks, initial public offerings, and corporate mergers.

Bloomberg has the details:

Corporate America is set to shower investors with a record surge of cash.

Between buybacks, dividends, and merger activities, companies are poised to plow $2.5 trillion into the stock market this year, according to UBS Group AG. The buying spree is equivalent to 10 percent of the S&P 500’s market capitalization, easily outstripping prior records.

It suggests that companies have nothing better to do with their money than give it back to investors.

They apparently see no sales growth to justify factory expansion or additional hiring. And without that capital investment, there is no reason to expect an increase in productivity or wages.

Instead, the net effect of the tax cut should be to amplify the trends of the last 30 years – increasing debt levels, shifting more resources to the wealthiest part of the population, and reducing the real growth of the Main Street economy.

As for the trade war, so far, it has had the curious effect of moving export sales forward, as buyers and sellers hastened to beat the deadline.

The U.S. trade balance took an unexpected jump as soybeans, in particular, were rushed to China last month.

But that blip has already disappeared. And now we are faced with the reality of a trade war – with lower sales, lower profits, and an even more sluggish economy.

More broadly, almost everything in that half-full glass – except the air – is either a lame misconception or an outright fraud.

As Bill reported above, there’s more to America’s employment picture than a simple unemployment rate.

For instance, more and more older Americans have had to work over the last 25 years…

That’s the story today as we chart the labor force participation rate of American workers aged 55 years and older from 1962 to today.

The labor force participation rate measures the number of people who are either employed or actively looking for work. 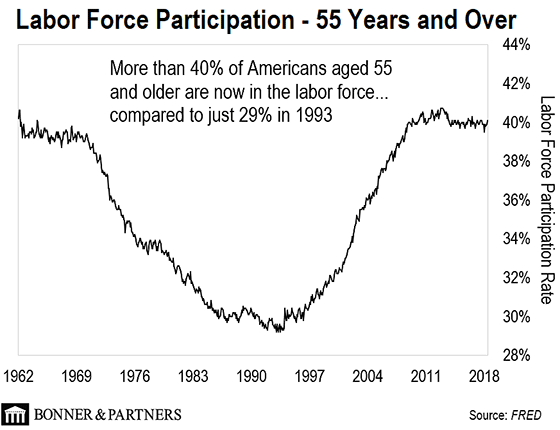 As you can see, more than 40% of Americans aged 55 and older are now either working or actively looking for work. That’s compared to just 29% in 1993.

What’s striking about this chart is that we are right back where we were in 1962. Labor force participation amongst older Americans fell sharply for three decades from 1962 to 1993… but it has risen higher ever since.

There’s no simple answer to explain this dynamic… but we do know that inflation-adjusted wages have been stagnant since 1971 – the year President Nixon removed the dollar’s final link to gold.

That made it harder for workers to save money… which has likely led to the increased labor force participation rate for older Americans.

Is This the Chart of the Century?
A chart recently made the rounds at the Federal Reserve. It shows the impact of globalization on the American economy over the past 20 years… and hints at what’s to come if the trade war continues to escalate…

The Amazon Crypto
Jeff Brown, Bill’s top technology analyst, recently uncovered something unusual. It suggests that e-commerce giant Amazon may be on the verge of releasing its own cryptocurrency. It may sound outrageous, but read all the details and decide for yourself.

In the mailbag, the crimes of Scott Pruitt are on readers’ minds…

That was harsh. I admire honesty, but you could use some tact as well. A small politician caught up in the world of Washington politics is easy prey. I don’t mind critics; a lot of criticism is well-deserved, but there is too much flat-out meanness. Where has civility gone?

Being a Canadian recipient of the Diary, I know absolutely nothing about Scott Pruitt, so I’ve no idea who or what he is, or what he did or does; but you do have a most delightfully entertaining and informative way of making a point. You’ve already convinced me that he deserves to be shipped off to some Oklahoma swamp or desert – whichever the state has.

I expect to be around for another 100 years, and hope you’re around as long and keep doing what you’re doing. Being rather poverty-stricken still, I’ve no idea whether the financial newsletters under your umbrella are up to the standard of the Diary, as I’ve not yet subscribed to any of them. But even if they’re not, the Diary, at least, is worth an enormous amount.

Meanwhile, a question for our editor…

Bill, any plans to publish your Diary as a book? Some of the entries are too good to keep only in electronic form. They need to sit on a shelf beside other classic books. Keep up the good work.

According to a recent poll, 77% of Americans believe the country is more divided than at any time since the Civil War.

Teeka Tiwari believes it’s all leading to something big. And starting tomorrow, the spark for a second civil war could ignite. Get the full story here.