BARCELONA – This just in… from our man in Argentina…

I stopped in Cafayate for lunch… In the square were some students from different schools celebrating “El día del aborigen Americano” [Day of the original American] as you can see in the picture.

The teachers’ speeches were depressing… “The land is ours… We belong to the land… We have the right to the land… ” etc. Poor students. What can we expect from them? The lazy ones will probably claim to be originarios when they grow up and make their living [on welfare]…

Everybody’s got an angle. From our correspondent in Los Angeles, MN Gordon, comes word of a new hustle:

Here in Los Angeles County, according to something called the Los Angeles Homeless Services Authority, there’s now a homeless population of precisely 57,794. For perspective, Chavez Ravine (i.e., Dodger Stadium), has a capacity of 56,000.

This army of indigents, roaming about the LA LA land paradise, has become a significant embarrassment for local leaders. Haphazard urban campsites litter the bank tops of the colossal, concrete Los Angeles River Channel between Downtown Los Angeles and Downtown Long Beach. The massive collection of tents and makeshift shelters has become too much to ignore.

Hence, the clever folks at the LA Community Development Commission have launched a pilot program to pay homeowners to construct backyard dwelling units to house the homeless.

Loans of $75,000 are being granted for constructing a new backyard unit for the purpose of housing vagrants. There’s even a design competition for model secondary dwelling units. What’s more, loan interest stops accruing after five years in the program, and the loan is forgiven after 10 years.

We can imagine how that will turn out. A lot of “vagrant” adult children and widowed mothers-in-law will end up in backyard apartments, paid for by the taxpayers.

But that’s the way government always works. The few exploit the many.

Our correspondent goes on to wonder how come there are so many homeless people in LA when the economy is doing so well.

…shouldn’t everyone be rich?

And from the White House we hear that not only is the economy great… it’s getting better! Donald J. Trump:

…America is strong and roaring back. Paychecks are climbing. Tax rates are going down. Businesses are investing in our great country. And most important, the American people are winning.

It really seems to be the best of times and the worst of times. Or… is this “best of times” story a form of fake news?

Colleague and budget advisor under President Reagan, David Stockman, has done a superb job of sorting through the data.

He found no evidence that “America… is roaring back” or that “paychecks are climbing”… or that “businesses are investing” or that the “American people are winning.”

Paychecks are keeping pace with inflation, nothing more. Just as they did during the Obama years.

Real business investment has been on a downward trend for at least the last 7 years. That trend is still in place.

As a result, labor productivity continues to decline, too… averaging only half the rate of its historic average.

There has been no pickup in employment, either. Looking at the hours worked, the rate of increase is slightly weaker than it was under Obama.

Which leaves the American people not winning at all. They have only been able to continue spending by taking a half-billion dollars out of their savings… leaving them deeper in debt and more vulnerable to a downturn than ever before.

And now, these losers are losing even more… because the feds are loading even more debt on their backs… $1 trillion/year in deficits (two and a half times more than GDP growth).

In other words, expect more favelas – makeshift slums – in America.

The strength of the U.S. economy is fake news. But in public policy, fake news is the only kind of news there is…

MARKET INSIGHT: CRUDE ON THE RISE

Today’s chart tracks the price of West Texas Intermediate (WTI) crude oil – the U.S. benchmark – from the start of 2015 through today. 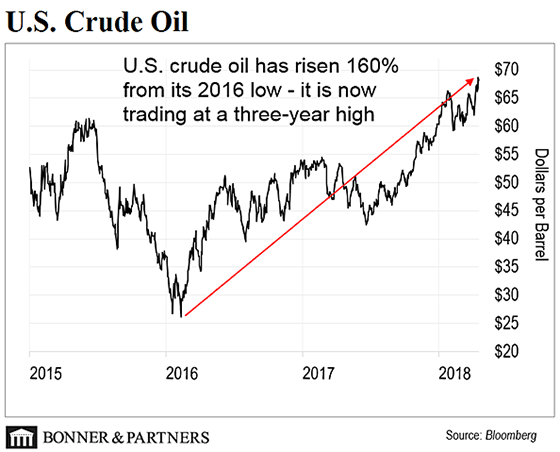 At over $68 per barrel, oil is now trading at its highest level in more than three years.

Trump: Reagan Redux?
U.S. stocks have rallied under the Trump presidency. And that has some analysts comparing today’s stock market rally to the one seen under President Reagan. But that might not be such a good thing…

Why Google Threatened to Ban Us
Last Saturday, Bill told dear readers the surprising reason why Google, the massive search engine, threatened to ban his network. Hear what Bill has to say and see if you agree with Google.

In the mailbag, a Dear Reader responds to Bill’s recent Diary, “Bitcoin Works!“

You disappoint big time. I suspect that supporting family interests is at the root of your changed attitude towards bitcoin. You used to insist that it wasn’t real – just some digits on a computer – and that you believed it to be immersed in a mania. It’s not like you to abandon a well-thought-out logic in your mind. You are now saying it has a use as a substitute for gold. This is very concerning!

It remains just some digits on a computer which have been subjected to hacking of coin dealers’ registers, with a lot of “coins” having disappeared. No government is going to tolerate a competing currency on its turf. And should dealing become substantial, governments will have no compunction about making dealing in cryptos illegal, with banks having to report any unexplained payments into one’s accounts. China and India are, apparently, well on the way to introducing such legislation.

Finally, gold is not difficult to acquire, with several online bullion dealing sites quite willing and able to sell you insured gold online, stored in independent custody vaults in widespread locations such as Switzerland, London, Hong Kong, Singapore, Canada, and New York – the choice of vault being entirely up to the purchaser. Furthermore, the bullion dealer I use is quite happy to sell you any quantity from a gram to a couple of tons, and is happy to permit physical delivery from any of the vaults the purchaser chooses to store his bullion in. I don’t believe countries such as India and China will ever ban their subjects from holding physical gold; it just has too much of a reputation in their cultures. I wouldn’t be as sure regarding Western countries, as we have witnessed in the 1930s in the USA.

Meanwhile, debts and deficits are still on readers’ minds…

I’ve been enjoying your missives for a number of years, and occasionally find reasons to comment. Today, you lament the fact that people discover what things are worth by bidding against one another. Do you know a better way? In my opinion, government is spending money unwisely and wastefully, but it is spending it on our behalf and for our benefit. The decisions are made by people we elected.

Thus, if you want to fret about government deficits or the lack of a gold standard, complain to your representative, not the Fed that carries out Congress’ wishes. What would a new gold standard be but a law that can be broken, like so many that are not enforced or enforced selectively? More than gold, bitcoin, etc., we need TRUST in our institutions and those we elect to watch over them.

I am 78 years young, and have been in business dealing with counterparties around the world, where transactions of $100,000-plus were concluded by phone, cable, or Teletype (forerunners of today’s tech) and an understanding of the rules and trust in each other. Today, it seems nothing can be done without a team of lawyers creating unreadable documents for a false sense of security. Nothing can replace trust.

I keep reading that our dollars are not redeemable for “real money.” But in fact, good ole USA green dollars can be swapped for gold and/or silver, just not by the government. Anyone that wishes to make that exchange can still do so. And it’s probably a good idea to redeem some green for gold and/or silver. I just don’t agree with the statement that the exchange is not possible. Just my take on the situation!

As a businessman, Mr. Trump had, I believe, four of his enterprises file for bankruptcy. He was diversified enough that this didn’t harm his overall position too much, and he still became very wealthy. Now though, he just has one “business,” the government of the United States of America. If he drives that into bankruptcy, we are all screwed.

…There is risk involved…

…You won’t be handed a million dollars overnight…

But this is a realistic way to turn a few thousand dollars into $1 million over time. See how here. 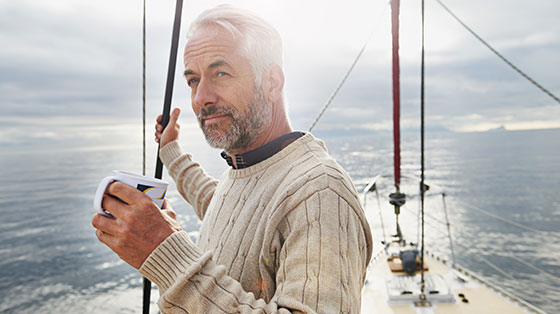