Turning and turning in the widening gyre
The falcon cannot hear the falconer;
Things fall apart; the centre cannot hold;
Mere anarchy is loosed upon the world,
The blood-dimmed tide is loosed, and everywhere
The ceremony of innocence is drowned;
The best lack all conviction, while the worst
Are full of passionate intensity.

ESKE CASTLE, DONEGAL, IRELAND – Rain is coming down this morning. Buckets of it. The Carolinas are getting walloped by Hurricane Florence.

Here in Ireland, another tropical storm, Helene, is said to be on its way.

It is raining hard already.

Yesterday, we went up to the coast to see a village that has been preserved more or less as it was 100 years ago. The cottages were just as you might have imagined, whitewashed stone with thatched roofs.

On the coast, the winds blow so violently that the thatch must be lashed down with ropes to keep it from blowing off. Inside, each cottage had a little peat fire and just a few pieces of simple furniture.

These were tiny homes – barely as large as the typical American living room. But they were cute, cozy, and – as long as the fire was burning – fairly comfortable.

In an unusually stark separation, the smart money and the dumb money seem to be taking leave of one another.

This week, the news seemed especially felicitous. Stocks moved higher on a wave of positive jobs data and opinion surveys.

The Dow now stands within 500 points of a new all-time high – which would signal a revival of the bull market that began in March 2009… or August 1982, depending on how far back you want to trace it.

Remember, few investors – unless they are lucky or very well-advised – make money trading in and out of small market moves… or by choosing stocks that turn out to be Apple or Amazon.

Instead, they get in at the right time… and stay in… allowing the “primary trend” to take them where they want to go. The primary trend has taken stocks on the Dow from under 1,000 in 1982 to 26,000 today.

And today, many investors expect that trend to continue. They think the economy is strong and that it should get better. After all, that’s what the president of the United States says; who would know better than he?

But Bloomberg’s Smart Money Flow Index tells us that the pros have been getting out for the last six months.

And this week, Roubini, Tepper, Dalio, and Gundlach – a whole gaggle of gurus – announced that they were turning bearish; the end of this credit boom is coming, they say. Perhaps soon.

Of course, you never really know which is the smart money and which is the dumb money until after the future reveals itself.

But our guess is that the smart money will turn out to be the money on the sidelines. A further guess is that the dividing line – between smart and dumb – will run through politics, where passionate intensity is running unchecked.

Many investors are sure things are getting better all the time – “beyond full employment”… 4% GDP growth… China is going to buckle – all under the watchful eye of the commander in chief.

Others are sure it is all little more than reality TV: contrived, manipulated, and ultimately, phony.

Here at the Diary, we take no interest in politics… except to despise it. Money is our beat here.

But today, politics exerts a rare and pernicious pull on the money world, like a dark star tugging a planet to its death.

The U.S. government is the largest player in the financial markets. It is the biggest spender.

Its budget policies stimulate or stifle the economy. Its bank – the Fed – fiddles the money supply and the cost of credit. And all of a sudden, under the leadership of reality TV star Donald J. Trump, the government is doing remarkable things.

It is increasing budget deficits, when traditional economists claim it should be cutting them. And it is launching a war on trade, when only a quack economist – trade advisor Peter Navarro – believes it can pay off.

It is emptying its vaults and granaries, when the old-timers insist it should be saving for the hard times ahead.

“It’s bad enough that deficits are increasing this late in the cycle, but we are increasing taxes and raising interest rates,” says Jeffrey Gundlach, founder of investment firm DoubleLine Capital.

It is a “suicide mission,” he adds. “This will put further pressure on the deficit and create a self-reinforcing cycle of higher debt and higher rates.”

We are also in the early stages of a trade war. Mr. Trump believes global trade is a win-lose contest. You win, he thinks, by tough, “art of the deal” negotiating, making your opponent lose.

“Our markets are surging, theirs are collapsing…” he crowed.

But trade is not a win-lose deal. It’s win-win. And it’s these win-win deals that are at the heart of capitalism, progress, and civilization. Turning trade into a win-lose deal guarantees that both sides will slide backwards.

Last month, the feds borrowed $214 billion. They spent $433 billion, of which $32 billion was on interest on the national debt.

In other words, half of what they spent was borrowed. And as interest rates rise to the Fed’s target, that $32 billion will turn into $50 billion a month. Annualized, that’s $600 billion a year – or approximately two months’ worth of tax receipts.

And when the next recession comes… watch out.

Deficits will widen from $1 trillion to $2 trillion. The government debt will soar to $30 trillion. And the interest – at 4% – will take up tax receipts from January through April.

It’s as if a kind of financial anarchy had been loosed upon the land. No one knows exactly what to make of it… or what to expect.

But as their uncertainty increases, their convictions harden…

One side believes we are headed to Heaven and buys. The other sees Hell plainly written on the ticket and sells.

We will see where we end up.

On Wednesday, Bill reported that his Irish friend was looking to buy gold. He might also want to look at gold stocks.

Gold stocks have dramatically underperformed gold so far this year…

That’s the story of today’s chart, which maps the performance of physical gold against that of the VanEck Vectors Gold Miners ETF (GDX) – which tracks a basket of 49 gold mining stocks – from January through today. 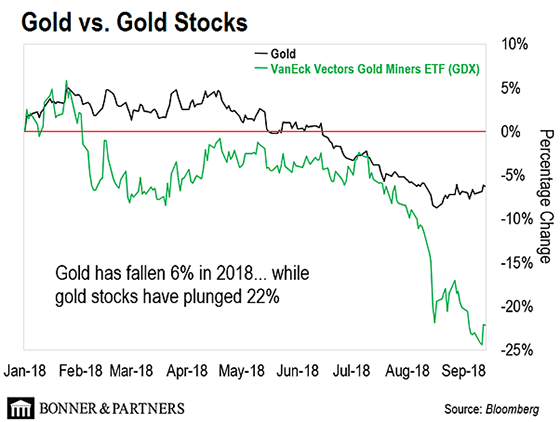 As you can see, gold has fallen 6% so far this year… while gold stocks have plunged 22%.

But history suggests that this dynamic could be setting up for a major gold stock rally.

The last time gold stocks underperformed gold this dramatically was from September 2011 through July 2012… when gold fell 14%, and gold stocks plunged 36%.

But that underperformance was followed by a sharp spike higher for gold stocks… GDX shot up 35% over the next two months, while gold only gained 15%.

Venezuela’s Minimum Wage “Solution”
As Bill has previously reported, Venezuela is in crisis. Its currency, the bolívar, is now virtually worthless. In response, the Venezuelan government raised the minimum wage by 3,000% overnight. Crisis averted, right? There’s just one small problem…

Why You Don’t Go All-in on Cryptos
When investing in a speculative asset like cryptocurrencies, it’s imperative that you use small position sizes. Going all-in on cryptos can be dangerous. Just ask Sean Russell, who stuck his entire life savings into bitcoin at the height of the cryptocurrency frenzy.

Why Most Investors Can’t Beat “The Market”
Beating the average return for stocks consistently is hard… very hard. On a long-term timeline, most active managers have failed to keep pace with the return of the S&P 500. Chris Mayer, Bill’s ace stock picker, reveals why.

Without considering the president’s crude, disrespectful, bullying personality, could you rate his performance prior to the trade tariffs and after?

l am struck, in some ways, by the parallels between Donald Trump and Benito Mussolini. One of the principles of Mussolini’s leadership was to focus media attention on himself and his personality. Trump has certainly been successful in the first of these, but his personality and motives seem still only murkily evident to his public.

Does that show that he has yet to see himself as the true leader he would like to be? If so, he is doomed to failure, since it reveals a lack of certainty in himself. Perhaps we should be thankful of this. Mussolini was ultimately a failure, even with his cult of personality.

When Bernanke admitted, “They failed to see it coming with such force,” regarding the Lehman collapse and its aftermath, was he trying to imply that they saw it coming, when they really didn’t see it coming? Or was he saying he takes some responsibility, but isn’t completely blind, in order to distract us from the fact that he didn’t warn investors/the public or take action (nor will they do so the next time they see it coming)? Or was it some other reason? Bankers should stick to banking. They know nothing about economics.

Bill Bonner should be president, but the left would somehow get rid of him. So let him keep giving millions of us the good spirit not to take it all too seriously. It will all crash, and Bill has told us how to survive and do well. I love Bill Bonner!