We think we know the answer. But let’s look at more familiar ESPs. This week, we’ve been focusing on Extremely Simple Patterns, or ESPs.

When you ask your wife if she’s gained weight, for example, she may not speak to you again for the rest of the week.

And that guy behind you in the unemployment line? He probably called his boss an SOB… and got fired… just like you did.

Taking a long-term view, you can see that stocks move in great waves lasting about 30 years from peak to peak.

Between the two peaks is a trough.

You want a simple investment strategy?

Sounds easy. In practice, it takes a lot more patience than most people are willing to give.

Still, these patterns are so obvious – at least, in retrospect! – and they move so slowly… it is not hard to take advantage of them.

Ignoring dividends and taxes, and allowing for drift and procrastination, stocks would have multiplied your money 10 times to 2000. Then, gold would have given you a triple again. Finally, from 2010 to 2017, stocks moved up 140%.

Not bad for three easy, low-risk investment decisions. No investment research. No risky gambles. No fees, spreads, commissions, or other charges. No bitcoin!

The bond market follows an ESP, too.

In the 1940s, the yield on the benchmark 10-year U.S. Treasury note – which moves in the opposite direction to prices – hit a record low of about 1%. From there, yields rose… and prices fell, until they hit a peak of more than 15% in the early 1980s.

Then the top in yields was in. Since then, it’s been downhill all the way, as the 10-year Treasury note yield fell all the way back down to just over 1% last year.

With Treasury yields near record lows… and Treasury prices near record highs… one can only expect another long wave of falling bond prices and rising yields to follow.

A long bear market in bond prices is a terrifying thing. Inflation eats away at the regular income payments your bond throws off… along with the value of the principal you get repaid when the bond matures. The market value of the bond goes down, too.

The pain lasts, day after day… year after year… for decades. Generally, it takes a whole generation to forget it.

Which is almost exactly what happened.

It had been more than a quarter-century between the time bond prices bottomed in 1920 and then peaked in the late 1940s. Then, bond prices fell (as yields rose) for the following 37 years.

And now, with the 10-year Treasury note yielding barely above 2%, people can hardly imagine yields above 3%… or maybe 4%.

But even a 4% yield would cut the value of a 2% bond in half. Five or six percentage points is scarcely imaginable.

But that’s an ESP, too: One generation learns and the next forgets.

All investors today have known – at least, most of those who are under 70 years old – is rising bond prices and falling yields.

Investors haven’t noticed yet, but the water is already rushing onto their feet. Bond yields are going up; prices are going down.

If that is right, we have another big investment decision to make: It’s time to get out of interest-rate-dependent assets.

The trouble is, almost all assets are interest rate dependent. Ultra-low borrowing costs have changed the entire economy. Almost all asset prices now depend on them. And corporate balance sheets. And household finances. And so does the U.S. federal budget.

The feds are in for an especially nasty shock. They’ve got $20 trillion in debt already… and have been recently adding debt at a rate of about $75 billion a month. Rather than drain the swamp… the swamp is filling up… with more debt.

And the Republican “tax bill” is going to add a lot more.

Among the many absurd assumptions of the tax bill is that there will be no recession for the next 10 years… and no significant increase in inflation or borrowing costs.

And yet, as far as we know, the expansion-contraction cycle is still in effect. So is the credit cycle. The next recession will turn the tax bill projections into nonsense. Deficits will soar to $2 trillion per year, as tax receipts fall… and costs (including more stimulus spending!) rise.

Yes, that’s a now-familiar pattern, too: The markets try to correct; the feds try to stop them.

Then, we enter the next stage… with rising bond yields and increasing inflation. Hold onto your hats; it’s going to be exciting.

In the meantime, the sun still rises in the morning and sets in the evening. Bums still ask for quarters on Charles Street. Lovers still kiss. Politicians still lie.

And it’s still better to sell at a top than a bottom. Sell stocks and bonds. Buy gold… and maybe, just for fun… a little bitcoin.

MARKET INSIGHT: IS THIS BITCOIN MANIA?

Has the bitcoin mania stage begun?

As you can see from today’s chart, the world’s first cryptocurrency just broke through the $16,000 mark.

And over the last 24 hours alone, investors have added more than 20% to its market value. 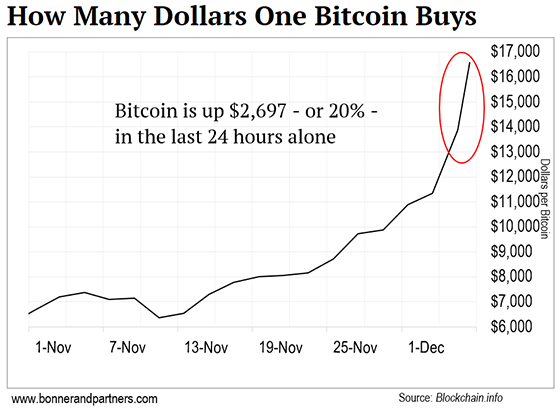 Bitcoin started the year worth $998.

Editor’s Note: Bitcoin is going parabolic. But we recently had a conversation with Bill’s top technology expert, Jeff Brown. He says that 99% of investors are so distracted by bitcoin, they are missing the bigger picture. It’s the technology behind bitcoin, not the cryptocurrency itself, that will change the world.

Bill remains skeptical of these cryptos. But if you’ve ever been interested in this market, Jeff Brown has found how to profit from the crypto explosion without ever buying a single bitcoin. Details here.

An Unseen Tragedy
This year, Bill has reported how much of “flyover America” is being left behind. Even worse, death and suicide rates are climbing for these forgotten citizens. Now, a new unsettling report says the situation has grown even bleaker for a surprising group.

Here Comes the Hemp Boom
Much has been made of the growing legal marijuana market. To date, little attention has been paid to hemp, the breed of the cannabis plant specifically used for fiber. But this overlooked crop is poised to become a billion-dollar industry in the next few years.

In the mailbag, bitcoin remains a popular subject…

I bought one share of Bitcoin Investment Trust… then I had to go to the gym. When I returned, I checked and it had gone down almost 500 points from 870! So it came up a little, but not much. I sold it and lost $339. That stuff is really volatile…

I argue that cryptocurrencies are not money. I bought a handful of shares of Ethereum when it was $12. Now it’s at $463. So what? It’s not like I can cash it out or use it to buy groceries or put gas in my car. Therefore, I find it useless as a form of money and as an investment, despite what the general consensus says.

Meanwhile, the discussion continues. Which is more important: work… or money?

I agree that work is more important than money. The so-called Universal Basic Income should go only so far as to alleviate poverty in the face of automation. It would not eliminate work; it would only “Give us this day our daily bread.” If you want meat on that bread, or even gravy, you would have to work for it.

I agree that it’s work, the challenges and struggles, that gives meaning to our lives. However, I see “work” as “occupied” and not necessarily as “employed.” Unfortunately, I suspect many consider “unemployed” as a barrier to a meaningful life. With a “universal basic income,” people could be educated to see themselves as self-employed.

I have met many pensioners who seem to gain a new energy when they retire. They seem to “work” harder than they ever did when they were “employed.” They could be categorized as self-employed. If future generations were educated to see themselves positively as self-employed on a universal basic income, this would release a lot of energy and imagination that is presently lying dormant under the disillusion of being unemployed.

Have a good Christmas, Elizabeth, and I hope Bill gets you something you really want.

I’m a 73-year-old great-grandmother with very little money. I work a full time job at $12 an hour, caring for dementia patients – 30, to be exact. I have $2,500 in savings and my Social Security to live on. I have to work. I own my home – actually, the bank does; it will never be paid off in my lifetime. Rich people would snub me; poor people would envy me.

I’ve read many articles by you through email. Your letters and your no-nonsense knowledge are refreshing and scary at the same time. Thank you. You are not, thankfully, biased. You truly care. I wanted to let you know that it’s not only wealthy people that want your information, but people like me who also need it. Thank you again for listening.

[Editor’s Note: Readers have been hearing from Elizabeth, Bill’s better half, this week. Read more about the Bonner family matriarch’s talents here.]

Regular readers know legendary speculator Doug Casey has identified opportunities that went on to return 721%, 928%, and 2,154% – as well as many more that paid 10-to-1 or more.

Next week, Doug is holding a free training master class to show readers how he spotted these trades. Reserve your spot here. 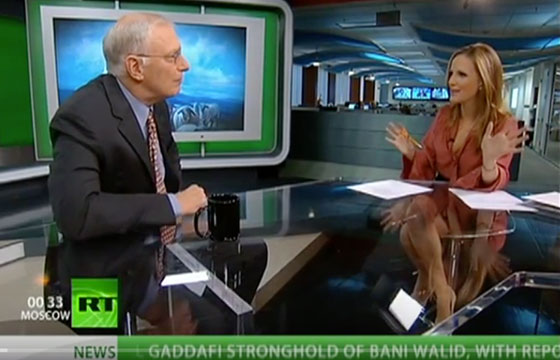