YOSHIZUKA AIRBNB, FUKUOKA, JAPAN – Greetings from Japan. I’m writing to you from an Airbnb apartment in the town of Fukuoka, in southern Japan. It’s cozy, clean, and cheap, and it has fast Wi-Fi.

We’ve decided to stay here for a few days and use it as a base while we use bullet trains to explore southern Japan. We’re paying $57 a night to live here.

I write by hand. Later, I’ll type up this letter on an old laptop I bought the other day in Tokyo. I paid $100 for it. I’m using it as a typewriter.

Kate will email this letter to you tonight.

Nearby, the boys are watching a documentary about the Battle of Midway. Penny is playing on the floor with the toy tea set we bought her in Hong Kong.

We’re having a rest day today because it’s raining and cold, and we’ve been pushing ourselves pretty hard these last few days.

Also, I don’t have my camera. I left it on a bullet train last night. So instead, here’s a picture from January, when we were detained by police in Egypt at a checkpoint and put in this “waiting room”… 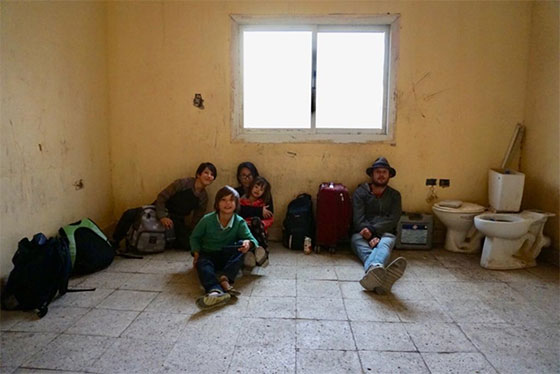 Back in January, we were detained by police in Egypt

I’ve spent the last year on sabbatical. I have had A LOT of spare time. I’ve used this time to read about… think about… and fill up notebooks about macroeconomics.

After hundreds of hours considering all the facts, this is my final conclusion:

America’s business model over the last 70 years was based on running a deficit with foreign exporters, like Japan, South Korea, Germany, and most recently, China… thereby exporting dollars (and industrial base) to the rest of the world… and then bringing those dollars (but not the factories) back home in the form of cheap loans to the U.S. Treasury.

This “business model” broke in 2013/’14 when China and other sovereign creditors reduced the flow of cheap loans they were supplying to the Treasury. The IMF’s data on global currency reserves shows this… 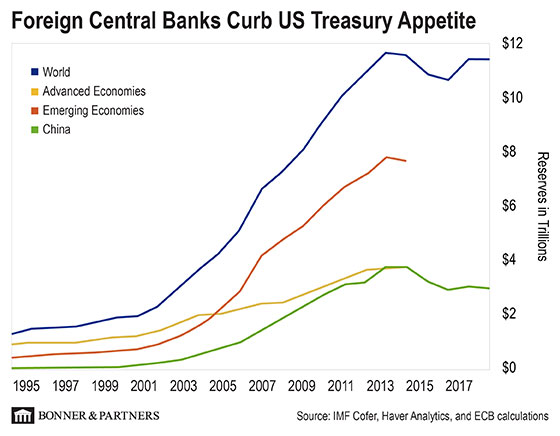 The federal government is now in the early stages of insolvency.

The Federal Reserve is about to “bail out” the Treasury. So there won’t be a “hard” default or a credit crunch, or anything like that.

We can watch the bailout in real time by watching the Federal Reserve’s balance sheet increase. (The bailout started in September 2019.) 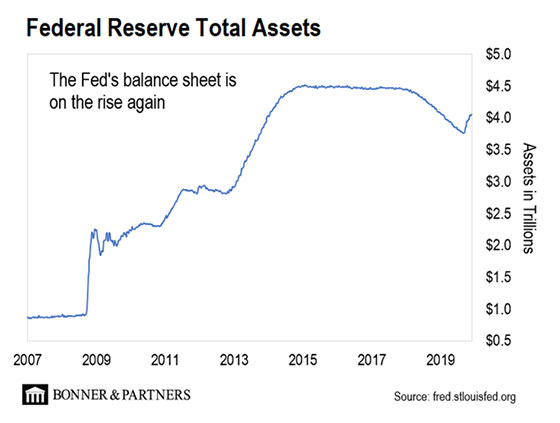 The expansion of the Fed’s balance sheet to finance the Treasury will lead (sooner or later – the timing is not predictable) to a major devaluation of the dollar, inflation, and what we might call a “slow-motion” or “soft” default.

Recessions – of which several must be coming soon – will escalate the size and scope of the bailout.

Absolutely NO ONE in mainstream finance/economics expects this. This is a very “fringe” view. (This is always the case before big shifts in the prevailing world order.)

But that’s exactly why it’s such an exciting idea to me as a stock market speculator. Because when the masses figure this out, it’s going to cause a historic rise in the price of gold and silver.

And it’s why Kate and I have converted all our savings to gold and silver, where we’ll keep them until the Dow-to-Gold ratio (which I last wrote about here) falls below 5.

It could take a while for the Dow-to-Gold ratio to fall below 5. Maybe 10 years. I’ll drive myself – and everyone around me – nuts if I sit at home watching news as my big speculation unfolds.

So I’m going to “leave the reservation” for a while. Sort of like putting a bet on the big game and then going fishing.

We’ve already “left the reservation” in a physical and a financial sense by selling our things, converting our money to gold, and hitting the road.

Now I want to “leave the reservation” in the digital sense, by getting rid of my phone and internet access…

But is this even possible? We’ll see…

We will stay in Japan for another 10 days. Then we’ll fly from Tokyo to Vancouver, where we’ll complete our circumnavigation of the globe.

At this point, we’re going to take a break from traveling for a few months. We’re going to visit our families, friends, and former colleagues at Agora.

P.S. A man approached me in the park the other day.

It was almost dark, and the air was getting cold. Most people had left the park already. The few who were still there were getting ready to leave. I was waiting for Kate and Penny to come out of Starbucks.

“Where are you from?” he asked. I told him I was from America, and we started talking.

He was 76 years old. He didn’t have children. He showed me pictures of his tiny, bare apartment. And pictures of his cat. He told me he receives a pension, but it’s very low.

“My wife and my mother both died five years ago,” he said. “I became very depressed. I’m only just recovering.”

We talked for 10 minutes. Then he said good-bye and walked on. I imagine he came to talk to me because he was lonely.

P.P.S. Good news. They found my camera. It’s in the Lost and Found office in the Kagoshima railway station. We’ll go for it tomorrow…

Travel is on readers’ minds today, starting with one who questions Tom’s recollection of U.S. geography… (If you missed it, Tom told the story of how he hitched a ride from Alabama to Texas with a seductive truck driver.)

Reader comment: Please correct your hitchhiking story. Interstate 10 does not go through Birmingham or Tuscaloosa.

How did you get to all the places you have been if you do not know the geography of the United States?

What route did the truck take from Tuscaloosa to Brownsville, Texas?

You had a lot of courage (or you were desperate) to ride that far with a person living a quiet life of desperation.

Reader comment: I have been fascinated with, and by, your adventures for years, starting with reading about your riding the rails for fun. We love your letters. Please keep ’em coming!

Reader comment: I enjoyed your hitchhiking stories, as I have experienced similar situations. After completing a three-month bicycle tour of the United States in late October of 1980 with my buddy, Jeff, we decided to hitch a ride back to Minnesota, as it was getting too cold to bike.

We were picked up by a drunk old man in Colorado by the name of Norm, who claimed to have hidden Idi Amin (also known as the “Butcher of Uganda”) in his basement. After several minutes of shooting off his mouth, he pulled a 357 Magnum (remember Dirty Harry?) and proceeded to fire at road signs with deadly accuracy.

Maybe Idi Amin really was in his basement. We did not stick around long enough to find out. We made a good excuse to get out of the vehicle after five minutes.

Besides gunfire and drunken drivers, many perverts made passes at me. Needless to say, my hitchhiking days are over.

One last story… In July of 1985, while I was bicycling through Canada on a six-month bicycle tour, an angry driver told me to get the F off the road. I smiled and waved, and was rewarded with the middle finger. I kept up with the vehicle and sidled up next to it at the next stoplight, and blasted both the passenger and driver with a full bottle of cold water and told them to “cool off”!

Tom’s response: Thanks for sharing. In 2008, while I was bicycling the length of Florida, a woman threw a beer at me from a car going past me at 40 or 50 mph. Luckily it just missed my head…

Reader comment: You are one gutsy guy, and your wife has got to be, too. I’m enjoying the adventure and look forward to your writings.

Reader question: I only discovered your postcards while you were in China, so maybe the answer to my question is in previous postcards. You often refer to “a” suitcase. How many suitcases do you travel with? How big, and what is the weight?

I plan to be impressed at how little you guys travel with.

I spent 20 years living and working in Saudi Arabia, the Philippines, and Japan. I did a lot of traveling, but it was usually vacationing back to the U.S. I always had two large suitcases and a carry-on full of stuff that needed to go to my destination. I got pretty good at hauling all that stuff, but I always dreamed of traveling light.

Tom’s response: We have one piece of checked luggage, which weighs 40 pounds. Then we have two pieces of carry-on luggage. It’s perfect for us. Miles manages the suitcase. Dusty and Kate manage the carry-on luggage. And I carry Penny on my back.

Reader comment: Thank you very much for your beautiful and inspiring reports of your travels. I’m always happy when I can read them!

I have a question about the financial markets. You write that the repo crisis is due to the fact that the U.S. government could no longer lend enough money on favorable terms on the open market, and therefore the Fed had to step in, quasi-monetizing the U.S. debt.

I read from Martin Armstrong, a well-known expert, that the crisis has another cause. He believes that there is a problem among banks in Europe, and that the Fed must step in because it is a global crisis that is slowly getting worse.

Tom’s response: I agree. It’s a global crisis, and there are many moving parts. But the bottom line is, the Fed – along with the other central banks – must bail out the financial system by printing money. We’re at the beginning of a slow-motion default by the world’s sovereign debtors.

Did I get to your question today? If not, please write me at [email protected] and I’ll do my best to answer it in a future postcard.

Kate and I read every message you send us, and we’ll never reveal your identity if we decide to publish your note.