MEDICINE HAT, ALBERTA, CANADA – We thought home life was “simple.” And life on the road would be more “complicated,” more “challenging,” more “stressful.”

But it turned out to be the opposite.

On the road, all we cared about was food, Wi-Fi, laundry, a hot shower, an occasional playground or activity and a comfy bed to sleep in… oh and getting ourselves to the next place. We stripped down life to its basic needs. It was a very pleasant, low-stress existence.

And then I realized home life wasn’t simple. It was just repetitive. And stressful. How good it felt to “reset the dials” and live apart from the Matrix…

Greetings from the Canadian Prairie…

My family and I have just completed an 18-month trip around the world using public transport. We visited 29 countries, and stayed in more than a hundred hotels and Airbnb apartments. We finished the trip last week when we crossed the Pacific Ocean and got off the airplane in Vancouver.

But what do we do now?

We have no home to go back to or any place to be. We sold everything and gave up our apartments before we left. We’re not even married.

My brother lives in Medicine Hat, Alberta. It’s frozen here at this time of year, and a permanent layer of snow and ice covers the town. We traveled here from Vancouver last week and we will stay here for a few days, recharge our batteries, and have a great time with my brother and his family.

Step two is building a new life. But who says we have to settle down, find a house, and join the Matrix again?

I’d like to go on another loop around the planet…

Last summer we traveled around Europe by train for 60 days. They call a trip like this “Interrailing” or “Eurailing.”

If you have any questions about this mode of transport, feel free to ask. We’re experts on the European train system now. Here we are on a sleeper train in Bulgaria… 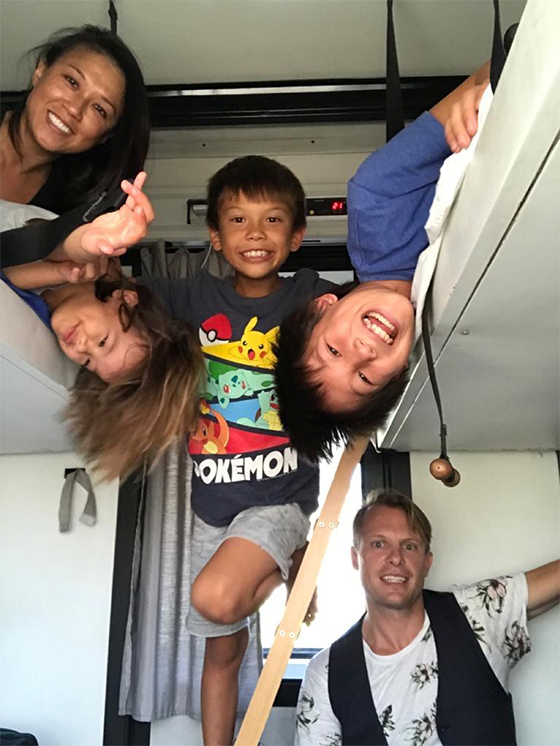 With Kate and the kids on a sleeper train in Bulgaria

Below is the 632-mile path we took through Europe on the train. Over 61 days, we visited 10 countries, crossed 16 borders, ate meals in 28 different cities, slept in 17 Airbnbs, used nine different currencies, and learned to say “thank you” in eight different languages. 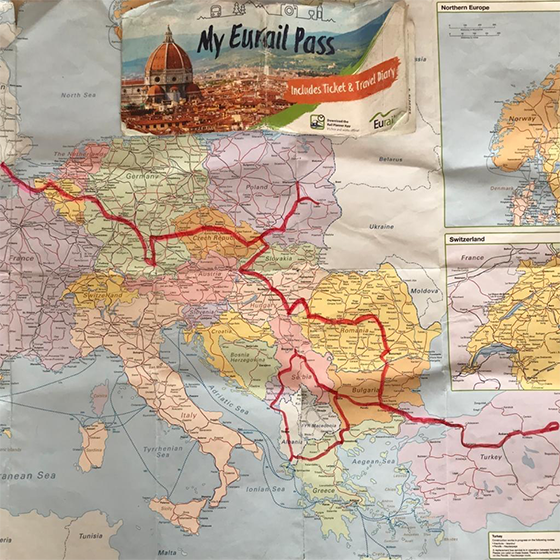 The 632-mile path we took through Europe on the train

We traveled in trains, buses, trams, taxis, Ubers, subways, one ferry, and one hot air balloon.

We were traveling during peak summer season. Sometimes we worried about getting seats and beds on trains. We needn’t have been. Things always worked out fine. And we never reserved seats, even though reservations were “compulsory” on most of the trains we used.

Here we are on a train leaving Warsaw, Poland. This one was full, but luckily it was only a two hour ride… 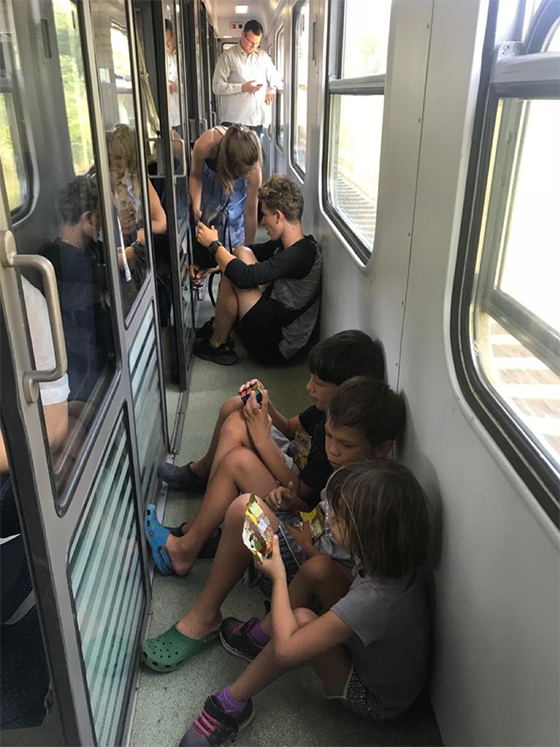 Leaving Warsaw… The train was full

P.S. We saw evidence of war everywhere we went in Eastern Europe. We toured two Nazi murder camps and saw a tower made of the skulls of dead soldiers. The kids asked lots of questions. We had long conversations about the things we saw afterwards. 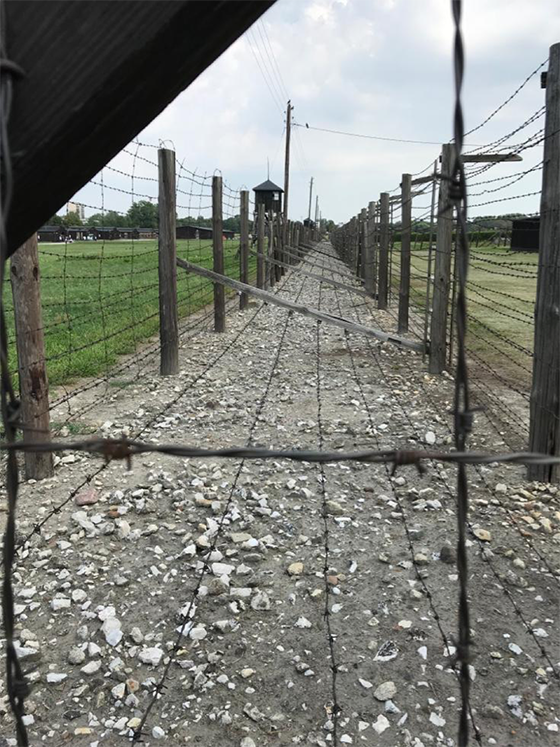 American bombers destroyed the building below in 1999. It’s in Belgrade.

Officially they did it to end the war in Kosovo. But the kids asked me why they bombed it and I just said, “I don’t know, war is complicated.”

It was the most honest answer I could think of.

In 1999, during the Kosovo War, American bombers destroyed this building in Serbia

Reader comment: I’ve really been enjoying your postcards. I’m glad to hear you made it to lovely western Canada in one piece. If you are looking for an interesting day trip, the Temple Gardens Hotel and Spa in Moose Jaw, Saskatchewan is a fascinating place. It has an outdoor pool on its roof that is fed from a 1200 meter deep well that intersects a mineral deposit. The “spa” is known worldwide for its healing properties and therapeutic effects. I take my kids there when we go to visit my in-laws, and it is always a blast.

Another neat thing to do if you make it to Moose Jaw is to tour their underground tunnel system (Tunnels of Moose Jaw). It is a museum, of sorts, that shows the tunnels that the Chinese immigrants initially built for opium dens and laundromats. Later on during prohibition they were used by Al Capone. My kids loved the tour. Oh, and one other must-see for the kids is the Royal Tyrrell Museum in Drumheller, Alberta. Dinosaurs… need I say more? Cheers, and have a great and awesome time. Can’t wait to hear more of your adventures.

Reader question: I’ve been following and appreciating your work for a long time. Could you please expand on your comment regarding investing in “an income-producing (inflation-immune) asset”? Not looking for individual investment advice, but I am guessing your “inflation sensitive” readers would love to hear more about this opportunity (i.e., what the heck is this investment). Thank you for sharing your family adventures!

Tom’s response: It’s a dream Kate and I have. To run a home-based family business. Like an Airbnb. Or a little hotel in some exotic place. Or build Hobbit houses. Or start an online business. Something the whole family can work for, and becomes our cash cow for the next 50 years.

Reader comment: Loving Tom Dyson’s postcards! Really amazing journey. When Tom gets onboard with Bill Bonner in a way that he could address his exchange with this reader (see below), I’d be really interested in knowing more about this…

Reader question: Do you worry about inflation reducing the value of your life insurance savings until it’s no longer what you need or hoped for?

Tom’s response: No, because I have inflation protection through owning gold. Also, I intend to borrow against the policies at some point soon and invest in an income-producing (inflation-immune) asset.”

I have these “income for life” policies due to the great information Tom shared when he was with Palm Beach Research Group. And it would be great to know how to protect the cash value in USD. Taking a loan and investing in the way Tom mentions is interesting. I know he can’t be specific, but maybe someone else at Bonner (like Dan Denning) can be.

Tom’s response: Thanks for the question. I’ll address this sometime. It’s important. Inflation is coming. We need to borrow against our policies and buy hard assets, or our cash values will slip in value in real terms.

Reader comment: I sit here in New Hampshire. I don’t agree with the very dominant opinion held by 99% of the people that "It can’t happen here." I expect rioting and indiscriminate slaughter to be highly likely if Trump is impeached and convicted (if there is still enough integrity in the U.S. Senate), or loses in 2020, or when he tries to remain as emperor after 2024. Perpetrators? Left? Right? Who knows? But I won’t be surprised.

Reader comment: Thank you for your postcards! I started to follow your world tour when you were in China. It’s very impressive and kudos to you! An amazing experience for the kids, they will thank you later. Just for your information, when talking about the genocide in Rwanda, the wording has been corrected to better reflect the reality. It’s now called “the 1994 genocide against the Tutsi in Rwanda,” instead of Rwandan genocide.

I thought it would be helpful for the coming postcards. I am from Rwanda and lived there all my life until after the horrible period. Should you need more information about Rwanda, please do not hesitate to ask me. Thank you. I’m looking forward to the next postcards.

Reader comment: I look forward to every postcard, and your story is so inspirational I tell it to my friends and family. The pictures from China are thought-provoking, and I sure would like to be able to point them towards some of the great photos you captured along the way. Have you thought about putting them into an online album?

Reader comment: My wife, small daughter, and my parents were in Japan for the 1970 Osaka world’s fair. When riding the monorail around the fairgrounds, my mother left a large purse with all our passports on the train at a stop when we got off. After contacting one of the staff, he said don’t worry. It will be there when the train completes its circle. Sure enough, it was. It is nice to hear that some things haven’t changed in Japan. Love your Postcards from the Fringe. We lived internationally for nearly 48 years and traveled a good bit.

Tom’s response: Thanks for all the notes! Kate and I read every one you send us, so please keep writing us at [email protected]. Your messages are an integral part of this project, and we’ll never reveal your identity if we decide to publish your comment.