The plumbing beneath the world’s financial system remains blocked…. (More below.)

I’m writing to you from the departure lounge at Managua’s airport. It’s almost midnight here and in a few minutes we’ll be on a plane to Florida.

The kids are on the floor at my feet, watching a movie. Kate sits next to me looking at her phone. I write this message to you by hand in my little notebook.

We arrive in Fort Lauderdale in a few hours. The next time you hear from me, I’ll be at the house of Kate’s parents.

First, I divorced their daughter. Then I destroyed my life and lost my business. Then finally, I got back together with their daughter and took her – along with their three grandkids – on a crazy and dangerous two-year trip around the world.

We came back to America briefly this year, but now I’m taking them away again, to Argentina. We don’t know when we’re coming back…

They must be anxious.

I wonder how they’re going to receive me tomorrow?

Earlier, we said goodbye to Bill and Elizabeth Bonner. Then we got into a car and headed for the airport. It’s a three-hour drive…

Kate and the kids slept on the way. But I couldn’t sleep.

On one hand, I was sad we’d had to say goodbye to Bill and leave Rancho Santana.

And on the other hand, I was overwhelmed by gratitude and appreciation for the beauty of life and how incredibly lucky I’ve been since my life turned around two years ago.

“Is this all a dream?” I wondered. “Am I about to wake up and find myself alone in my horrible little apartment in Delray Beach?”

We had the BEST time in Nicaragua.

Rancho Santana is a very special place and in two years of traveling the world, we haven’t found another place that more closely resembles paradise, especially for a homeschooling family like us.

The children were able to learn about the ocean, farming, wildlife, the local community and how to drive a stick shift… all in three weeks.

Plus, it was the safest place we’ve been in two years… even safer than Japan.

Here’s our final sunset, which I took earlier today…

Our last sunset in Nicaragua

You’ll recall that ever since last fall, the U.S. government’s gargantuan appetite for cash has been overwhelming the banking system’s capacity to lend it.

It’s been causing a cash crunch in the market for very short term loans, which is an essential market for keeping capitalism alive. Like oxygen.

The Federal Reserve had to finally intervene last September when interest rates spiked 400% in one afternoon. Ever since, the Fed’s been “bridging the gap” by supplying the cash the government needs.

In other words, without the Fed’s intervention, the government would be insolvent and unable to continue operations. We’ve been calling this a “soft default.”

As we’ve warned many times, this situation is about to get a lot worse.

Second, the government is about to launch massive new tax cuts and spending plans.

Third, the Chinese and Middle Eastern economies have just collapsed. These two regions have long been a source of funding for the U.S. government. That’s just dried up.

And fourth, the entire U.S. yield curve is almost at zero percent, which reduces the incentive for the private sector to lend to the U.S. government.

Yesterday the Fed announced it was expanding its short term lending programs.

The illiquidity in the banking system is so strained, this is the second time this week the Fed has had to increase the size of its lending programs.

In short, we’ve just entered the final act in the U.S. government’s bankruptcy and the end of the era of unbacked government bonds – especially U.S. Treasury bonds – being used as reserve assets by global central banks.

To watch this drama play out, the chart we must watch is the chart of the Fed’s balance sheet. 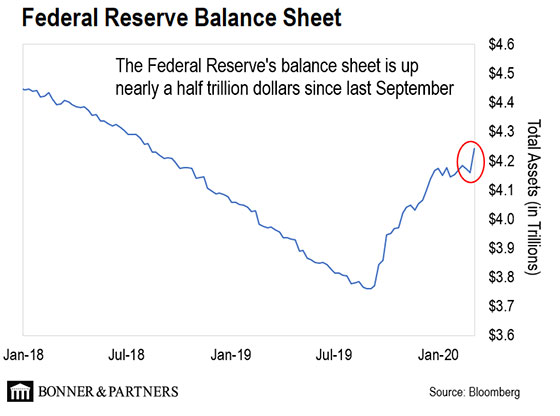 As the government spirals into bankruptcy, the Fed’s balance sheet will explode higher.

P.S. The government’s bankruptcy will NOT result in a hard default on its obligations, as Lebanon did this weekend. It will be a soft default whereby the dollar gets devalued by inflation and America’s creditors get paid back in full, but with a vastly watered-down dollar.

P.P.S. This will be very bullish for gold, which I expect will play a central role in the new monetary world order.

In today’s mailbag, readers come to Tom’s defense after another reader called the Postcards narcissistic… share their own travels… ask about owning gold… and offer their take on the coronavirus…

Reader comment: No, you are not narcissistic. And yes, being narcissistic is hard to describe. It is easier to say what it is not, and it is not Tom Dyson. I love your Postcards!

Reader comment: I am an 88-year-old woman who has enjoyed hearing from you from the beginning. I have always loved to travel, and before my husband died I had traveled all over Europe, Canada, and 48 states. Also, since he died I went with the Oxford Club to South America. We traveled all over Chile and Argentina. I think you are doing a wise thing to get back with Kate and be a good father to your children. I think that is very wise and I am not sure I see anything narcissistic about it.

I wish my husband and I could still travel, but I am so thankful for all the traveling we did before he died. I had the pleasure of meeting Bill Bonner, his wife, and children many years ago in Vancouver, Canada at a meeting of some kind. I have been to several meetings there and Vancouver is one of my favorite places in the world.

Because of the Oxford Club and Stansberry Research I have lived a very good life financially since my husband died in 2000. My hobby is investing and keeping up with financial news. Other women my age can’t even talk about it. It is very boring to be with a group of women my age. Most of them don’t know where to begin with improving their finances. Keep up the good work and enjoy life. I wish the best for you, Kate, and your children!

Reader comment: Your Postcards are autobiographical and, like any autobiography, reflect on the life, emotions, and times of the writer. As such, they give the reader a different perspective, sometimes challenging, of life and its possibilities. May you continue writing postcards for many years yet – they are the first of some 100 emails I look at each morning and beat a cup of coffee and a newspaper anytime.

Reader comment: Nicaragua’s ocean view looks pretty awesome. It’s great you and your family are getting to see and experience all these locations.

I wanted to thank you for the tip about the big load of old gold coins that hit the market. I took your advice and added to my gold stash a little bit this past week. I picked up a nice Eagle and Double Eagle MS-64 for under a 20% premium to bullion. I’m getting close to at least 5% gold on hand. I’ll add a bit more here and there when I can.

Reader comment: Hello! I enjoy reading all of your updates, and how you’ve managed to pull your family back together. Knowing that you are all out of the market and are invested in gold, I’d like to know is your holdings of gold, paper, or actual physical gold. If it’s physical gold, where would you hold it as you are out of the country on yet another adventure with your family?

Reader comment: My ex-wife was as narcissistic as one can get! By reading your Postcards I see no narcissism in your personality – or selfishness! The people that call you narcissistic probably cannot define the word in its true sense or maybe just assume the worst. Wisdom is not just education but experiencing the fact!

I had a ranch next to Doug Casey’s in Salta, Argentina and the experiences my children received from being there has helped them be successful in life. Not just financially but mentally. Keep going!

Reader comment: I enjoy your emails and miss your advice when you worked with Palm Beach Letter. I just got crushed by the stock market. I’ve been selling naked puts on great companies for the last five years, but it all came to a halt on Tuesday with this additional stock drop caused mainly by the coronavirus.

I’m, not sure why it’s caused such a drop. The swine flu in April 2009 to August 2010 had up to 575,000 deaths world wide and 4,000 deaths in the U.S. The VIX fear indicator ran between 20-30 most of the time thru this period. It would seem as though we won’t have near the amount of deaths this time with the coronavirus because it’s being so closely monitored, but the VIX has been around 50-60 the last 4 days.

I do volunteer work with a retired college professor who was into stem cell research and was very familiar with the coronaviruses. He said it isn’t much different than the old fashioned flu, except it is more contagious and it is like a hard flu virus that usually hurts older and unhealthy people the most. He believes the media has overinflated the dangers because ordinary flu kills thousands of people, but since it goes unreported we have no comparison to the past.

I enjoy hearing about your family and especially your market advice. I think that it is good advice to hold some gold and silver. People may not be aware that they can convert a 401(k) into a self-managed IRA, controlled by an LLC that they control. And with this LLC they can buy physical gold, silver, real estate, etc.

Tom’s response: Thank you for all of your messages! Please keep writing us at [email protected]. Kate and I read every one.