WEST PALM BEACH, FLORIDA – When governments take on too much debt, they eventually get forced to deleverage/recapitalize.

It’s happened every time for the last 500 years. And it’s about to happen again now…

Frankly, the prospect of this has terrified me for years. I lost all my confidence – both as a writer and an investment analyst – from depression. And I’ve been resisting this responsibility.

When I started writing again last year, I was just letting everyone know where we were and that we were safe. And writing a little about gold, which is where we’d put our savings. Nothing more.

But then the market crashed, which was huge, because everything got shaken up and now there were bargains to be had…

Some gold stocks, for example, fell 70% in three weeks. And even some of the mainstream darlings – great companies I’ve been watching for years but would never consider buying at the prices they were trading at – fell 50%.

My confidence was coming back after writing every day for six months. And, of course, the market crash validated what I’d been writing about: that the market is overvalued, we are due for a recession, the government is broke, the Federal Reserve will bail it out, etc. This emboldened me further.

Now, I feel my mojo coming back. And I’m starting to see opportunities. The tanker stocks for example. I’ve become fascinated with tankers and shipping, learning as much as I can about it. It’s an extraordinary opportunity to make doubles and triples without much risk.

And now I’m starting to think about other real assets. Like copper. And zinc. And forestry. And agriculture products. And natural gas. And building a portfolio of safe, hard asset investments to protect us from the coming rapid debasement of the currency.

All this is getting me excited about writing an advisory again.

(I’ll continue writing these Postcards and sharing everything I’m thinking about.)

I’m convinced there’s going to be a revolt against paper money soon.

Actually, it’s not paper money. It’s the excess leverage governments have taken on over the last 40 years through issuing too many liabilities. They’ve become too indebted and they need to recapitalize.

The world’s stock of paper money is still backed by gold, unofficially. Central banks still hold thousands of tons of gold. The U.S. holds the most, with over 8,000 tons. This gold backs the system, even if they don’t recognize this officially.

All that’s happened is the government has overleveraged its gold with too many liabilities. This happened in the late ’60s, too. That time the dollar was fixed to gold, so gold flowed out of the U.S. until they untethered it. Then, its market value rose. It recapitalized the government’s balance sheet.

Britain went through the same experience in the early 1920s. Sterling was the world’s reserve currency, but the Treasury had overextended itself fighting WWI. Gold was flowing out of the Treasury.

Now, look at the chart below. It shows the value of the U.S. Treasury’s outstanding debt as a ratio to the market price of the gold at Fort Knox. (That’s where the Treasury keeps a big part of its gold reserves.) 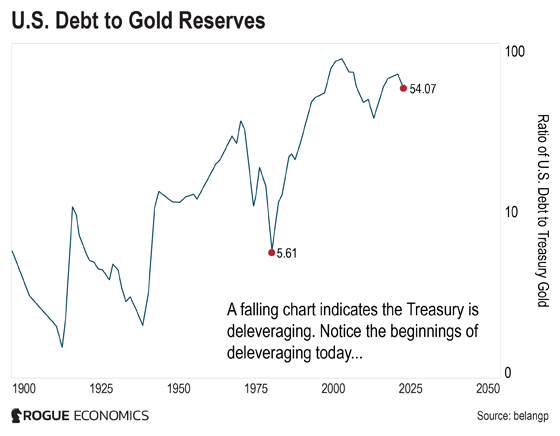 Increasing the market value of the gold in Fort Knox is the way the markets will do this.

The chart above indicates that the gold price would have to rise at least TEN TIMES for the government’s leverage to get back to 1980 levels. I think that’s a very reasonable target for gold.

I don’t know when it’ll happen. It could be happening already. Gold is at seven-year highs and acting very strong. Or maybe it takes another 10 years. I’m mentally prepared for that, too…

P.S. It’s still too early to begin buying natural resources (other than gold). We’re in deflation mode still and there’s more pain ahead. I’m watching oil closely. Oil is the master commodity… and I imagine there’s going to be a glut of oil and very low oil prices for longer than people think. It could be a couple of years. The other industrial commodities should mirror oil. So now’s the time to be building our shopping lists… and preparing for the opportunity to buy assets for pennies on the dollar.

P.P.S. Oil is fascinating to watch. Oil companies are going to keep pumping. But there’s no storage left. An unstoppable force meets an immovable object. Could oil prices go negative again? I think they might. Will anyone be brave enough to hold an oil futures contract for June delivery into expiration this month? Surely oil is going to crash again…

Reader comment: GLD is quite clear. You don’t get physical gold on redemption, you just get the U.S. dollar equivalent. Sprott (PHYS) says you can get physical gold. However, it would seem to me that that would only happen if you have sufficient funds invested to take delivery as a 100 oz or 400 oz bar. They are not going to cut a bar for you. And then, once you have the darn thing, where are you going to put it? Midnight gardening?

Reader comment: Love your Postcards, love traveling with you, and enjoy your insight into the markets.

Reader comment: Now that you’ve purchased a tent camper, may I suggest joining Good Sam Club? They offer a cents-off-per-gallon fuel discount at Pilot/Flying J gas stations, discounts at Camping World (RV sales, parts, and repairs), discounts when staying at Good Sam Campgrounds/parks, and other services. And they make available a thick book listing campgrounds across the U.S. The fuel discount alone will eventually pay for the $29 fee to join. I intend to renew my membership in June as I have a slide-in camper for my pickup truck. It’s like having a local contact wherever you go.

Reader comment: Do you have any thoughts about your Income for Life policies now that the insurance companies will be hit with a wave of early death benefits? I’ve heard talk that this could be really bad for insurance companies, especially when paying out on lots of younger healthier insured. And I wish these companies invested in gold to keep up with inflation!

Tom’s response: The mutual life insurance companies we invested in have all been in business for over a hundred years, and made it through the Spanish Flu pandemic okay. I’m not worried at all… except, as you point out, for the debasing of the dollar’s value.

Reader comment: Another reason for skipping GLD is that it’s taxed at sale above normal capital gains. Question, though. Gold bullion is in short supply, yet money is pouring into GLD, CEF, PHYS, et. al. Where are those entities getting the bullion to satisfy that demand? Can we be assured it’s there?

Reader comment: Glad to hear you and the family are hitting the road with a camper in tow. I am not sure how much experience you have with trailering, but PLEASE have the bearings replaced before setting off on your adventure. Also, make sure the camper tires are new(ish) and that you have a good spare tire or two… and a jack… and an X wrench. Also, make sure the tire pressure is at the maximum recommended PSI before leaving on your adventure.

Quick question… Do you anticipate a revaluation of the gold on the Fed’s balance sheet if/when there is a major loss of confidence in the USD? If yes, care to wager a guess at the revaluation number? I believe it’s currently valued at ~$42.00. Thanks!

Tom’s response: A gold price of $20,000 an ounce would put the Treasury’s leverage at about 1980 levels. If the dollar loses its reserve currency status, gold might have to go to $40,000 an ounce to recapitalize the Treasury sufficiently…

And, as you know, your messages are integral to these Postcards. Please don’t stop writing us at [email protected]