We’re at the edge of the Gobi Desert in the center of Asia. The landscape is extraordinary. The rocks are the colors of rainbows. Here we are… 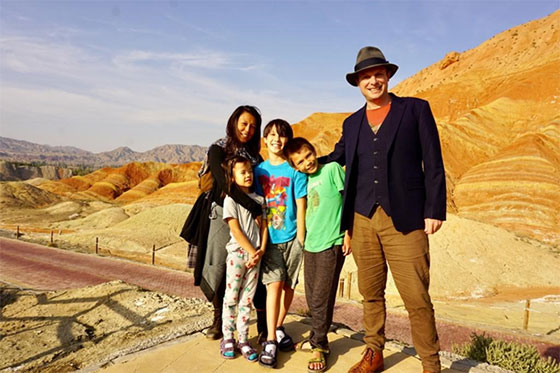 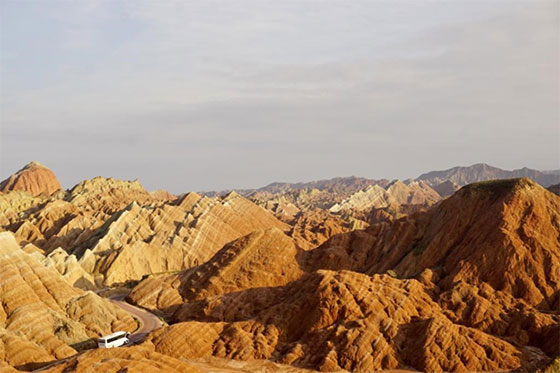 Our view of the Rainbow Mountains in the center of Asia

Greetings from China. My family and I are traveling around the world, living out of a suitcase.

In the last 16 months, we’ve spent time in Poland, France, Rwanda, the Congo, Turkey, Lebanon, India, Vietnam, and a few other countries.

We’re currently in northwestern China, on the Silk Road, in a town called Zhangye, staying at a hostel where the beds cost $8 a night.

We’ll be in this region for another few days. Then we’ll head east to visit places like Beijing, Xi’an, and Shenzhen…

For now, let’s turn over to the markets.

I’ve written before about how the years 1998 and 1999 saw a peak in stock market valuations – perhaps the greatest ever.

The internet and technology had caught the public’s imagination. Taxi drivers were recommending stocks. Grandmothers were forming investment clubs. And the press were talking about a “new era” in which stocks would never fall again…

“This is straight out of the textbooks,” I thought at the time. “A classic mania.”

Simplest Way to Time the Market

The one truth about speculation: The stock market is manic-depressive. It swings from oversold to overvalued every generation or so.

I first understood this idea at school, studying the Crash of ’29 and the Great Depression in history class. I was just getting interested in investing. I bought my first stock at age 11, and it’s been my “guiding star” ever since.

The chart below shows that contrarian idea. It tracks the P/E ratio of the U.S. stock market going back 120 years. (Remember, P/E – or price-to-earnings – ratios measure how much investors are paying for every $1 of a company’s earnings.) 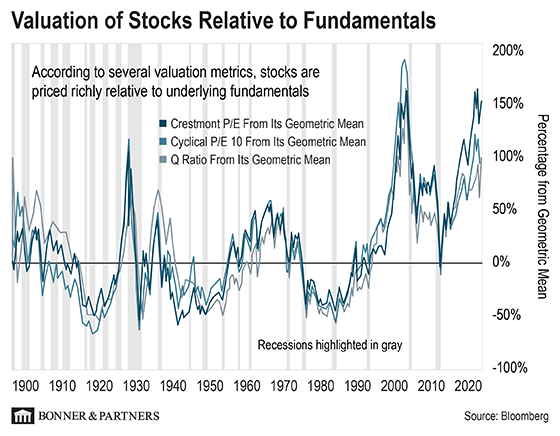 You don’t need to understand everything that’s going on in this chart. Just notice how valuations have oscillated around the mean (horizontal black line), moving between overbought and oversold. And notice the towering peak in 1999.

It was with this perspective that I watched the tech-stock mania and the bursting of the bubble in 2000.

I didn’t have any money to invest at the time. I had just graduated from university.

But I did have the insight that this moment would positively, absolutely mark the beginning of a new market cycle… that gold would outperform stocks… and that valuations had begun the long descent to “undervalued/undersold.”

The “long walk down the mountain,” I call this.

That was 20 years ago. Gold has since outperformed stocks by about 2-to-1. The markets are still overvalued and overbought. I’ve been bearish on stock market valuations the whole time. And I will continue to be bearish on them until we reach the cycle trough.

If you’ve been following my postcards, you know the Dow-to-Gold ratio is the cleanest way to follow this contrarian market-timing strategy.

When the Dow-to-Gold ratio hits 5, that will be my initial signal that the valuations bear market is nearing its finish. It’s now around 17.4.

Here’s a chart of the Dow-to-Gold ratio going back 120 years. Notice how well it lines up with the valuations bull and bear markets in the chart I showed you earlier. 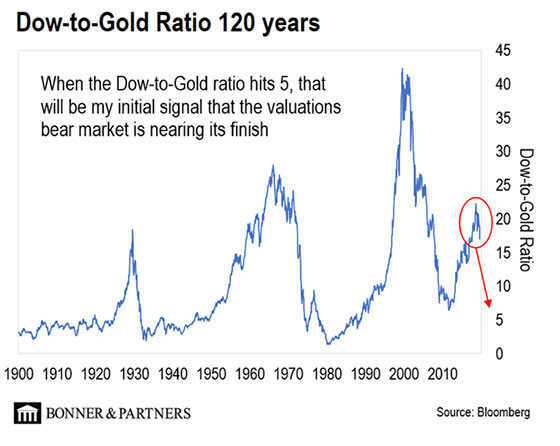 Now, someone asked me recently…

In your last postcard, you predicted the Dow-to-Gold ratio going below 5 is still some time away. I was under the impression since you embarked on this trip that it was right around the corner?

It’s five to 10 years away. But that question brings up another good point…

Complete cycles are usually around 30 years (15 years for half-cycles)… about the length of a career on Wall Street. This cycle is taking longer to play out than previous cycles.

I think it’s because, as I discussed on Monday, governments have launched the greatest financial experiment in history to subvert the cycle and prevent valuations from reaching their destiny.

In the last two months, Treasury debt outstanding has increased by $800 billion. The Federal Reserve has to monetize the government debt because there isn’t enough cash in the system to meet this demand.

In the future, this will be seen as one of the greatest ironies in history. “They thought they were fixing it; they were actually making it worse.”

Think about this. Do you really want your savings in anything BUT gold and silver for the grand finale of this experiment?

P.S. I’ve been told this model is “humbug” and “sophism.” But if you consider crowd psychology, it’s logical that stock market investors would behave like this.

P.P.S. This is also why I’m bearish on bitcoin. It went through a mania in 2017. All that bullish sentiment needs to burn off before a new bull market can begin…

Reader question: From your pictures, I am seeing significant construction in China (buildings, bridges, highways, trains, etc.), yet the buildings are empty, the train station is empty, no one is riding the scooters, etc. What do you attribute this to?

Tom’s response: I’m still trying to figure this out. My working hypothesis is that China – in a general way – is fast and loose with its infrastructure spending. It has a “build it and they will come” mentality with the trains, buildings, roads, etc. Sometimes this works. Sometimes it leaves a black eye. Sometimes it just needs more time for the people to come.

The issue is, I think, how China is paying for all this stuff. It’s being financed by bank loans. But what happens when the loans go bad?

Reader question: You say, “I’ve hidden my gold in several places.” What does that mean? I have some sovereigns, and they’re in the bank… But is a larger number safe in the bank?

Tom’s response: I won’t publish where I’ve hidden my gold. But I will say, I don’t have the perfect solution. I’ve sort of resigned myself to the fact that with physical gold investing, there will always be an element of “hide and hope.” In the meantime, the bank security box is probably the best option.

Reader question: You seem to be getting along fine in China. Do you or Kate speak Chinese? I very much enjoy reading about your world travels, especially in China.

Tom’s response: Nope. We use hand gestures, and when that doesn’t work, I use Google Translate. They know I’m not Chinese, so they have low expectations of me. But they think Kate is Chinese, and they expect her to speak Chinese. Comedy ensues…

Reader comment: Thanks for your postcards. I look forward to them. I think you should continue to write about your mental health. Your description of how you felt, and the pain and disruption of life, fits me to a T. I lost my wife last August. This has put me in a tailspin; we were married 40 years.

Tom’s response: My condolences. Please hang in there. I know it hurts. “The only way out is through” was a very helpful saying for me. And I think it’s true for grief.

Reader question: I have started to invest in “digital gold.” I wondered if you have heard talk of or seen this on your travels? Continue having a great adventure with your family.

Tom’s response: No, I haven’t. But I love this idea, and I’d be an early adopter. I thought I saw Sprott had come out with something.

Reader comment: Thank you for your very honest and inspiring posts every day. I have two kids and can relate well. Your missives are such a contrast to the sensational “get rich today” crap I get bombarded with.

Reader comment: I love reading about your family adventures and wish I’d had the nerve to do it years ago.

Reader comment: I don’t know how I got started with Postcards, but I’m thoroughly enjoying it.

Reader comment: I am really enjoying your messages from China. I have often wanted to visit, and your information is very useful without removing the mystique that I have always associated with that place.

Reader comment: I enjoy reading your postcards about your travels with your family and your ideas for investing. I like the pictures and your travel experiences!

Reader comment: I’m really enjoying the postcards. The business insights are good, but I’m following for the discovery and adventure. Like you, we also homeschool our kids.

Tom’s response: Thanks for all the kind messages. Keep them coming at [email protected].

Kate and I read all of them, even if I publish only shortened versions of them. We find them so encouraging and comforting.

Your comments are also an integral part of this project. But don’t worry… I will never reveal your identity or publish any potentially identifying details from your messages.