LONDON, ENGLAND – 3 in 4 migrants who arrive at the Mexican border to enter the U.S. illegally are NOT from Mexico. They are from El Salvador, Honduras, or Guatemala.

In order to reach the States, they must first pass through Mexico. They are illegal in Mexico – as they are in the U.S. – so they cross Mexico by riding a freight train called La Bestia (the Beast) south to north.

La Bestia is the most dangerous train in the world to be a passenger on.

The main reason for this is criminal gangs MS-13 and Los Zetas prey on the migrants as they make the journey north, like crocodiles prey on antelope crossing the Zambezi River.

The migrants are helpless on that train. They don’t even have legal protection. The gangs rape, steal, kidnap, and murder with impunity.

So fifteen years ago, a friend and I attempted this journey to see what it was really like.

We didn’t encounter any Zetas. But there were plenty of other dangers to contend with, including the U.S. Border Patrol agents and the scorching hot exhaust of the diesel locomotives…

Greetings from London! Kate and I, along with our three children, completed an 18-month trip around the world three weeks ago.

We’re catching up with our families now – who haven’t seen us much lately. In two weeks we return to the States to begin a new life.

Not much to report. It’s winter and we’re staying indoors, mostly.

So today I’ll tell you my La Bestia story…

We went there, but the train didn’t leave for three days, so we squatted on an abandoned railway station with the other migrants.

Here is my bed… 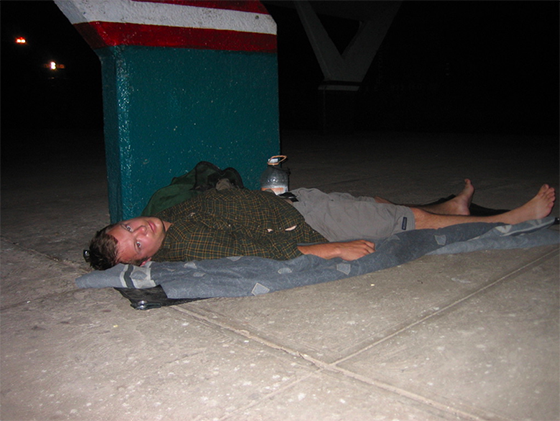 Where I slept for three days, waiting for the train

Many had been on the road for over 40 days, with little food and no possessions. But they were close to the USA now and soon everything would be better, they told me.

They all planned to cross the border on foot, walking through the desert with the help of either friends or what they call “coyotes” – people smugglers.

After three days, we knew most of the regular faces that hung around there. And you can be sure they all knew us. Word of the gringos had even spread to the small town 5 miles away.

One day, a man approached me in an Internet cafe. He spoke perfect English. He said he knew about crossing the border and told me to call him if I needed any help. He was a coyote.

But in El Sufragio, they were friendly. We even made friends with a Honduran immigrant, Rigo, and his brother. They were headed for Colorado Springs, illegally of course.

Rigo’s was an interesting story.

He’d already been living in the USA for seven years. He had a steady job operating heavy equipment on a construction site for $19 an hour; he had two kids, a cell phone, a car, a bank account, fake papers, and lots of friends. His English was almost perfect.

All in all, I got the impression Rigo was a real leader. He was responsible, hardworking, and intelligent.

Two months beforehand, Rigo’s house had been raided by the police.

He’d invited a friend to crash in his spare room for a few days as a favor. But unbeknownst to him, the friend was a drug dealer. And when the drug dealer got into a bar fight and the cops found cocaine on him, they raided Rigo’s house and found 10 vials in the drug dealer’s room.

Rigo was arrested and charged with intent to supply. Fortunately witnesses came forward and testified that Rigo had nothing to do with drugs and that the drug dealer was to blame. So they pinned Rigo with possession and deported him, after a three month stint in jail.

Then they flew him home, as they do with all deportees. He had visited his family in Honduras for a few weeks and was now heading back to the USA, this time, with his 17-year old brother in tow.

“My credit score is all messed up now,” he complained.

Anyway, the train to Chihuahua was scheduled for 11 p.m. Having waited three days for it, this news came as quite a relief.

At 10 p.m., three rusty old units crawled out of the maintenance sheds and backed onto a string of freight cars. This was our train. And this was the signal to get on board.

We wandered down the train, looking for rides.

This train was mainly composed of unrideable ribbed grain hoppers. (There are no platforms at either end, so unless you don’t mind perching above the wheels on a thin strip of metal — what they call the “cheese slicer” – you’d better look for something else.)

There were other freight cars – some sealed boxcars, a chemical tanker, some flat cars – none of which are any good – and maybe four or five sausage-shaped grain hoppers, which hobos love because they have a nice porch at either end above the wheels you can lie on.

Unfortunately, the sausages were already taken. We were pondering what to do… when the train started making noises and getting ready to pull out.

We sprinted back up the train to the first freight car, a sausage-shaped grain hopper with a porch no one else had wanted.

Why had no one else wanted to sit there? We didn’t have time to think about it and we jumped on as the train started to roll.

Here I am relaxing on the porch of the hopper… 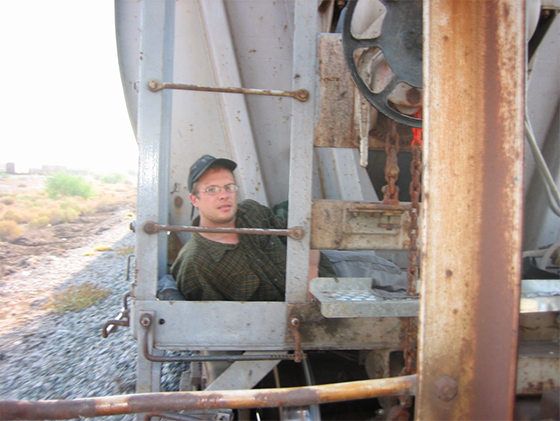 Hobos love the porches on these grain hoppers

We quickly figured out the reason… but by that time it was too late to get off.

It was scorching hot. It felt like the skin on my back was blistering, and in the longer tunnels, I couldn’t hold my breath long enough and I thought I was going to pass out…

Mexican diesel engines are not like diesel engines in the States. There are no federal regulations, no minimum safety standards, no emissions controls…

In Mexico, if they can pull the train, they’ll use ‘em. They look old, rusty, and decrepit.

Second, the route to Chihuahua is mountainous. In fact, the train has to literally climb over a mountain range, ascending 10,000 feet in a little over 300 kilometers. That’s why they needed 88 tunnels…

It’s also why we wanted to ride it so badly.

But a steep climb like this requires some diesel… some real diesel… and lots of black smoke.

It was nighttime, so we couldn’t see the tunnels approaching. We just had to anticipate them.

I’d wet the collar of my shirt and pull it over my face like a gasmask. Then I’d try to sleep and hope the suffering would go away.

The first thing to change was the sound. The roar was deafening, but when we went into a tunnel, it seemed to wrap around my head like a python and squeeze my whole body.

Then came the heat. It escalated. The longer the tunnel, the hotter it got. Every second was worse.

I was all wrapped up in my blanket, so the first few seconds were ok. But it intensified… until I thought it was just about to scorch the back of my legs and the skin on my back. It never did… it just felt like it was about to.

Then came that first breath. You don’t want to breathe but you have to.

The smell doesn’t hit you at first, the heat does. I felt it on the back of my throat. It scorches. Then I exhaled. That’s when I got the taste… of diesel and soot in my lungs.

Some tunnels were 10 minutes long.

And just when it had occurred to me that I might be falling unconscious, the noise would disappear, the heat would lift, and cool mountain wind would hit my face again.

Morning was better. We could see the tunnels coming and we could prepare by taking a big gulp of air.

At the first stop, we got down and went to find our Honduran friends. They had been perching on a thin metal strip – one of the cheese slicers – all night and wearing only t-shirts. They must have been freezing.

Rigo suggested we get on top of the train. “Look ahead,” he advised. “And watch out for branches.”

P.S. Gold hit a new 7-year high today… I hope you took my advice and bought some these last couple of months while gold was having a breather. Next stop will be $1,917, gold’s all-time record high, set in 2011…

P.P.S. Here I am on top of the train the next morning, emerging from a tunnel… 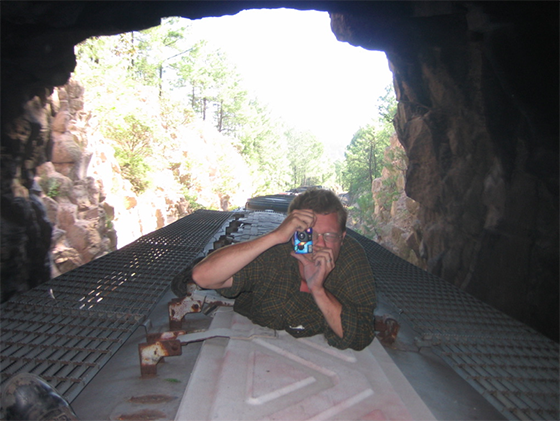 Encouraging words for the Dyson family, after Tom said he has no idea what their new, married-again lives will look like…

Reader comment: Well, I LOVED this story and I hope you will post more such exciting stuff! Thank you, Tom! So courageous. You are not just another rich man giving advice!

Reader comment: Tom, I know what you are going through right now and I have good news. Even though Kate and you are not married, even though you don’t have a “home”, and even though things look like you don’t know where to go, this is the best news you could ever have in front of you.

Relish it, don’t run from it. Only when you are in a position where you are today are you able to see clearly the amazing life which is in front of you.

This amazing life will be yours no matter what happens, even if Kate says no. I don’t think she will, but you are now learning your happiness is not dependent on any single human decision. You can only learn this when you take the commitment you have taken to put family first, others second, and you last.

You are an awesome man, Mr. Dyson, even though many may not understand, including you.

Reader comment: I believe it’s time now to get married and find a small house or townhouse to get settled, and get the children going to school, with support at home. Every three to four years, take some historical trips. A light job either for you or Kate will also bring other people in your life.

Reader comment: What you are doing is going to be appealing to many people, though they have to be able to afford it. In the January 2 postcard, I see you say you are not only living off savings but "at times earn a small income". For some people that is going to make all the difference.

Tom’s response: Thanks for all the kind notes! Kate and I read every one – even if we don’t publish an answer right away. Please keep sending your questions and comments to us at [email protected].