TALLULAH FALLS, GEORGIA – For almost a year, I’ve been warning readers NOT to bet on rising interest rates.

I felt the Federal Reserve would introduce “yield curve control,” an obscure and controversial policy technique.

Yesterday, we received news that Fed policy makers have been “thinking very hard” about implementing curve control… (More below.)

Greetings from the north Georgia backcountry…

Two weeks ago, my family and I left quarantine in West Palm Beach, Florida. We set out to explore America with a car, a tent, and a sleeping bag each.

We’ve slept next to swamps, in barns, and by lakes. Soon we’ll be among cornfields and eventually in the mountains…

Out tent is a simple affair. It’s 6 feet wide and 15 feet long. It has a twin bed, a full-size bed, and a small sitting area. Kate and I share the twin bed. The boys share the full-size bed. And Penny sleeps on a mattress on the floor.

There is no kitchen or bathroom. We either cook over the campfire or on our Coleman camping stove. And we use the campground bathrooms or the bathrooms at supermarkets.

We don’t have A/C. I’m not sure how we’ll cope with the summer heat out west, but so far it hasn’t been a problem…

Here we are in our tent. It’s raining today so we’re having a rest day…

Kate and the kids in our tent

The government is broke. The only way they can meet their obligations is by paying their creditors with a massively watered-down dollar.

I’ve been calling this a “soft, Fed-enabled” default because creditors will get paid in full. It’s just the dollars they receive will buy a lot less than the dollars they loaned in the first place.

If I’m right about this, the Fed will have to cap interest rates along the entire yield curve. It’ll do this to prevent interest rates from rising as it prints the $10 or $20 trillion it needs over the next few years to keep the world economy from crashing.

I’ve been calling this yield-capping idea “curve control” in these Postcards. And it’s the reason I don’t suggest shorting government bonds… even though the federal government is completely broke, inflation is coming, and the Treasury has started defaulting on its debt.

The last time they used curve control was in World War II. The United States was fighting on two fronts and the government had to issue an enormous pile of bonds to pay for the war effort.

To prevent interest rates from rising, the Fed said it would buy every 10-Year Treasury bond at 2.5%. It then printed the money it needed.

This time there’s no world war. But there is a recession.

Recessions blow huge holes in government finances. The government doesn’t collect as much in taxes and it has to promise more spending.

The latest estimates show the Federal Government is on track to spend almost $4 trillion more than it will earn this year.

That’s its worst-ever budget blowout by far. It’ll be followed by another $2 trillion deficit in 2021, and then $1 trillion annual deficits indefinitely thereafter.

Of course, we still have gigantic obligations to the military, social welfare programs, and a $600 billion annual interest bill on all the dollars the Treasury has borrowed.

A few months ago, I must’ve sounded crazy to suggest they’d bring back “curve control.”

Yield-curve control, which has now been used in a few other countries, is I think a tool that can complement – potentially complement – forward guidance and our other policy actions.

But don’t bother trying to short bonds. The Fed won’t let bond prices fall. Instead, the damage, or “outlet,” for all this inflationary pressure will show up in the currency markets.

As I’ve written before, there’s going to be a synchronized global devaluation. Gold has already started to sniff it out and has started to run higher.

My advice remains the same: Avoid stocks and bonds. Wait on the sidelines in gold until the storm has passed.

P.S. Most people would tell you the stock market has been pretty resilient to all the lockdowns, the closed businesses, the unemployment claims and now, the saber rattling with China. But this is MY chart of the stock market… 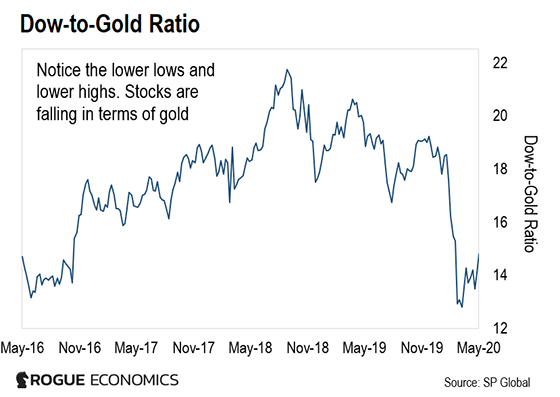 One reader suggests the cause of the recent market bounce…

Reader comment: You asked what would explain the market’s recent 33% bounce. Well, take a look at the bounce after the first decline in 1929. Even more pronounced, went on for over three months. Then, the market dove almost relentlessly for three years, down 80%. It’s called a bear market rally, the most violent sort. So don’t rule out deflation.

A lot of wealth is being destroyed, and the Fed’s power is overrated. Just as they cut rates and printed all the way down from 2000-2002 and 2007-2009, their spell will not overcome the amount of credit and asset value destroyed. This doesn’t mean gold won’t do well; gold stocks were one of the few winners in the Depression. No market rally has ever persisted at these levels of valuation. I doubt this will be the first.

Tom’s response: You may be right. We could be seeing a bear market rally. And there could be a big decline in the nominal level of the stock market ahead.

Or maybe you’re wrong… and the stock market will be moving to new all-time highs in short order.

My position is, “I don’t know, and I don’t have a strong feeling either way.”

It seems to me the nominal price of the stock market has become completely divorced from reality. It simply bears no resemblance to the underlying economic fundamentals… and it hasn’t in years. So the normal standards I use to analyze the stock market – valuations, macro economic analysis, sentiment, etc. – don’t apply anymore.

Rather than gamble on it – which is what everyone else seems to be doing – I’d rather just stand aside and watch from the sidelines, with our money in gold.

Meanwhile, another reader suggests owning gold isn’t realistic for many people… one asks for guidance while waiting for the Dow-to-Gold ratio to drop… and another wonders when gold will move higher…

Reader comment: A side trip to Sundance, UT was the Nirvana that made me make a midlife correction very similar to Tom’s. I sold everything and bought a ramshackle cabin that I renovated for six months in the mountain air and sun. It brought me back to life. This time of year is spectacular in the mountains.

Reader comment: I have so enjoyed the Postcards publication. The ideas are great for the few; therein is the rub. Tom and family can hit the road, secure in a living income, while parking a great deal of wealth in gold and golden assets. The rest of the world isn’t like that. There isn’t enough existing gold to give each living person a couple of gold pieces. If the entire monetary system were based on gold, the total world GDP would shrink to almost nothing. It would be an honest nothing, but still nothing.

Tom’s response: Personally, I would not like to see a return to the gold standard. I agree it’s inflexible and impractical. I’d like to see gold used as a common store of value… where the world keeps its savings. There would be no capital gains or sales tax on gold, as gold is neither an investment or a collectible. And central banks would signal the strength of their currencies to the world by how much gold they own. Then I’d like to see the dollar, or some other currency or unit of account, used for everyday transactions.

Reader comment: I’m retired. I can live out my retirement frugally, or go begging to the government. My largest asset is an IRA. Were I to convert the IRA to precious metals, the net value would halve immediately.

The other problem converting my savings to gold is: What would I live on while I wait for the magic 5 number?

Tom’s response: I’m not sure why the net value of an IRA would “halve immediately” when converted to precious metals. Obviously, I’d never recommend any action that caused a 50% impairment to anyone’s capital. Are you referring to early withdrawal penalties? In a situation like that, I would buy a safe, low-cost gold ETF, or closed-end fund with my IRA.

I answer your second question with another question: What investments do you currently own that generate the income you live on? This is a far bigger issue, in my opinion. In the world of zero interest rates, falling stocks in terms of gold, and a hyper-inflating Fed balance sheet, how do you generate the income you need from your nest egg, while also owning gold? I’m going to think about this issue.

Reader question: Tom, in your presentation you told the wonderful story of how you, your wife, and family all got back together. Traveling the way that you do as a family is certainly a great education for your children. One question: I’ll soon be 86 years young and my dividend income does help supplement my income. A couple of my dividend investments have understandably cancelled their scheduled dividend payments recently. More might do the same soon. How would buying gold and waiting for the Dow-to-Gold ratio to fall to 5 help my situation?

Tom’s response: I will address this in a future postcard.

Reader question: I recently purchased your newsletter and read your Tom’s Portfolio report. Fascinating. I believe this 100%. My question is, why hasn’t gold gone up yet? When will the move be? I worry that the gold market is rigged – with the short sellers and other traders. Gold never behaves like one would expect…

Tom’s response: In the short term, markets and share prices never move as you’d expect. Prices are fickle. But over the long run, they always find their level. Gold rose from $250 an ounce in 2001 to about $1,710 yesterday. And it’s on its way to over $10,000. So I’d say the move has started. But as always, there will be corrections and spikes that don’t seem to match the prevailing narrative. Best to hold and forget.

Reader comment: Hey Tom, I enjoy reading about your, and your family’s, exploits. It appears that you have reconnected with what is most important in life… specifically “being in love.” Kudos for your realization, and I have to admit I am a bit envious of your carpe diem approach.

As a physician I cannot pack up and leave, but part of me wishes I could, for sure. I came pretty close to talking my wife into an overseas adventure living and working in Australia seven years ago. Job was set, etc. Alas, at the last minute, her fears struck the vision down. But I have never regretted choosing my wife and three kids over my adventurous spirit. For in the end, we will measure our life on how much we loved, versus our exciting adventures. And there is no better place to start than with the family.

Enjoy, and know that some of us live vicariously through your entertaining postcards. How lucky your significant other is willing to take the adventure with you. Kudos and best wishes!

Tom’s note: Thanks for writing in, as always. Please keep sending us your questions and comments at [email protected].