UNION STATION, WASHINGTON, D.C. – Over the last few months, I’ve written several times about the idea that the Federal Reserve will cap interest rates along the entire yield curve.

We’ve been calling this “curve control.” It’s something they did during World War Two.

Guess who just published a paper on this subject?

Greetings from Washington, D.C. I brought my family here today to see the main tourist attractions.

We saw the Capitol Building, the Washington Monument, the White House, the Lincoln Memorial, and the various war memorials near the National Mall. We saw the Watergate Hotel, the Kennedy Center, and the Library of Congress.

Then we finished our day with a visit to the Smithsonian Air and Space Museum, which is the most popular museum in the world. (Today it was almost empty. The staff kept telling us how lucky we were.)

Washington, D.C. is one of the most thought-provoking and cerebral places a tourist could go anywhere on Planet Earth.

I’m writing to you now from Union Station, one of the world’s most beautiful train stations.

We’re in the food court waiting for the train to take us back to Baltimore. The kids are eating junk food and I’m writing to you by hand at a table next to them. I’ll probably finish this Postcard while they sleep on the train home.

Here I am standing in front of the Federal Reserve building earlier. I’m about to be hit by a bus. Just kidding. The bus went right past me… 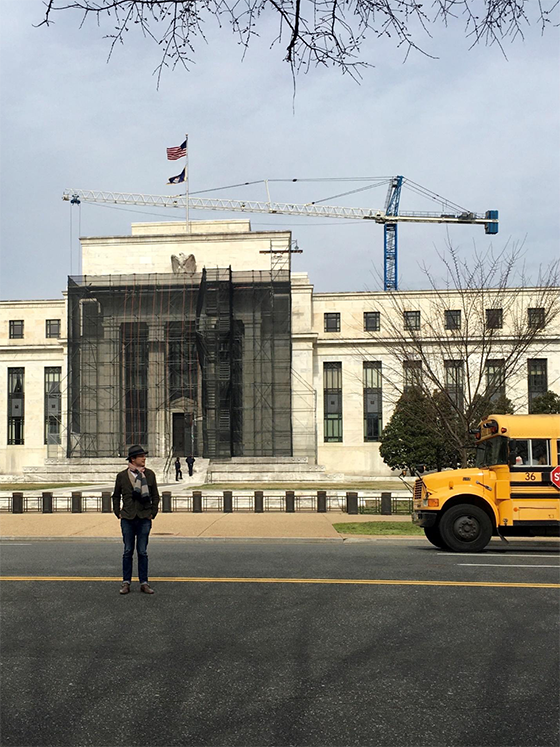 Tempting fate at the Fed’s doorstep

Did you know the U.S. Treasury must borrow more than $5 trillion every year?

That’s because much of the Treasury’s debt is extremely short-term.

One of the big themes we write about in these Postcards is the pile of money the U.S. government has borrowed…

…and how there aren’t enough creditors in the markets to satisfy the U.S. government’s gargantuan borrowing habit. At least not at the prevailing 2% interest rate for short-term loans.

This is why the “repo” market blew up in September. And it’s why the Fed now has to bail out the Treasury by printing money. (I wrote about this in more detail in the January 28, 2020 Postcard.)

I expect the financial pressure on government finances to grow over the next few years, especially if there’s a recession.

(Side note: Recessions blow huge holes in government finances because the feds don’t collect as much in taxes. Yesterday, the latest numbers showed the Federal Government is on track to spend over $1 trillion more than it will earn this year. That’s its worst-ever budget blow-out in a non-recession year.)

About That Fed Paper…

Right now, the Fed is only bailing out the government in its short-term borrowing needs. But as the bailout grows in scope, I expect the Fed to start controlling interest rates at all points along the yield curve.

This is something that happened in 1942. That was the last time the government spent a gargantuan amount of money, blew a big hole in its budget, and couldn’t come up with the cash.

We’ve been calling this phenomenon “curve control” in these Postcards.

Perhaps this is a “trial balloon,” and they’re starting to consider this idea inside the walls of the Federal Reserve?

P.S. Update: We were short a ticket on the train back to Baltimore because I didn’t realize Penny (7) had to pay a full adult fare.

The conductor was going to charge us $8 in cash plus a $5 convenience fee for Penny’s ticket. The passenger next to me overheard the conversation and gave me a spare ticket he happened to have in his wallet. A random act of kindness!

Here we are in Union Station… and at the Lincoln Memorial. 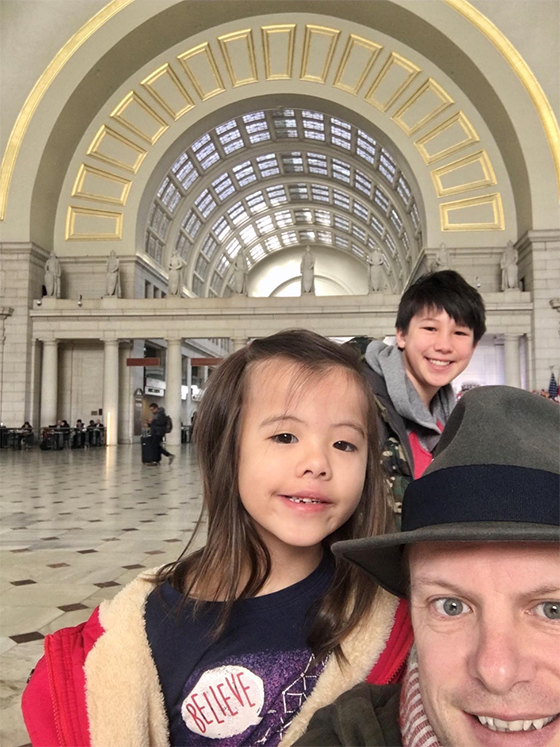 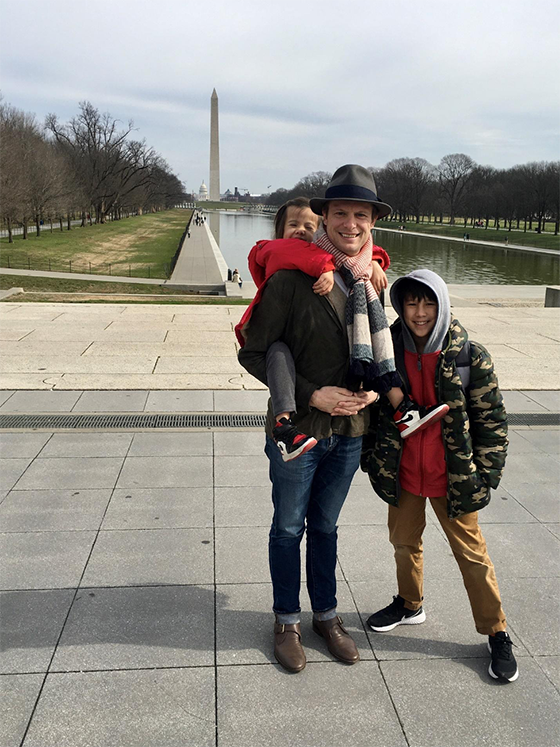 With Penny and Dusty in D.C.

P.P.S. Curve control is one of the reasons I’m not especially interested in shorting government bonds, even though the U.S. government can’t meet its obligations and is now in a “soft, Fed-enabled” default.

Instead, it’s going to devalue the dollar and meet its obligations with watered-down money. It’s the only way they can avoid a “hard” default.

The only people who don’t understand this are regular American taxpayers. And as usual, we will be left holding the bag when they devalue our dollars and inflate our cost of living.

Kind words from readers… along with concerns about the coronavirus, after Tom and family spent some time in China…

Reader comment: I look forward to Tom Dyson’s postcards. He really knows how to write in a manner that any layman can understand.

I have learned a lot from him. He is one of a kind, and his postcards need to be put into a book form! I wish him and his family all the best. God bless them!

Reader comment: Your story is awesome and I’m so glad you turned around. The sad thing is, lots aren’t getting it and they leave in despair. I’m not a psychologist but I believe the human brain can make decisions to renew, rebuild, and make life worth living. Ain’t it great to be alive and at 77 with no physical problems and no medications. I believe I, too, am on the right track.

You have a wonderful knack for writing, as it is honest, to the point and no BS. Thanks and keep it up. I’ve been an educator for 57 years. We did homeschooling through high school and never regretted it.

Keep the stories flowing. They touch my heart.

Reader comment: “There is nothing to fear, except fear itself.” I trust you know who said that. Wrong-road Roosevelt, to be sure.

You are a multi-talented and fearless young man. You are setting a very positive example for your children and obviously, you have a wonderful wife that is all in.

You do have a safety net, although you are not the sort that requires it. Your writing will not just get you by. It will cause you to prosper, while the precious metals will be icing on the cake.

The experiences you share with your family are the envy of all men. Never compromise your honor, or your pursuit of happiness. Too many of us got consumed with chasing our goals and let our wives raise the kids, when our most important goal should have been to be a great husband and a great dad.

You definitely have your priorities straight, my friend!

Reader comment: You mentioned that your family has some flu-like symptoms… Have you heard of the coronavirus, which is rampant in China with over 35,000 active cases and 999 deaths (the early report)? And the two cruise liners that have been quarantined for 14 days after having found some passengers with the coronavirus on board?

Anyone who recently visited China is being advised to see their doctor if they have flu-like symptoms. Anyone infected with the virus has to be placed in isolation wards for treatment and their family quarantined for 14 days.

Reader comment: I’m sorry to hear that Kate and the kids are sick, but I was wondering if you had been checked/vetted for COVID 19 exposure, considering you had just visited mainland China in recent weeks.

Thank you for sharing your life story with us readers. It is truly a breath of fresh air to read about yours, Kate’s, and the children’s journey over the past several years. Keep up the good work/writing!

Tom’s response: It’s been more than 90 days since we were in China. We’d have gotten sick long ago if we had caught it. This is just a common cold we caught from the children at the homeschool class we went to.

Other readers turn to inflation, and what it means for the gap between rich and poor in America… As well as good wealth-building alternatives outside of gold…

Reader comment: It’s my impression you can’t have inflation without wage growth. We have asset inflation, but not much price inflation in goods and services because wage growth has not expanded.

The gap between rich and poor is because the inflation of assets has far outpaced wage growth. The rich have the assets and that’s where the bubble is.

Tom’s response: I agree. We have stock and bond hyperinflation. But almost no consumer inflation.

I expect this will change in the next few years. Either by itself… or because the gap between rich and poor will get too big and they’ll change their policy approach.

The government could launch a wide-ranging infrastructure plan, for example. Or the Fed could change its quantitative easing (QE) program somehow to avoid asset inflation.

Reader question: I have followed you from Stansberry to Palm Beach and was delighted to see your return. I think your analysis is astute and prescient.

My question is: What else besides gold? Is there ANYTHING else? Farmland? Residential Buildings? Anything with a return? What do you do if you need some income to live on? Sell a bit of your gold horde?

Tom’s response: I bet starter houses rented out to regular working families in America’s heartland will hold their value. But I wouldn’t like to own expensive condos in economically sensitive places with high property taxes like New York.

In other words, I like humble “work horse” assets, as long as they haven’t already been inflated by easy liquidity. Farmland, timberland, small businesses… anything you could call “hard money.”

Reader question: I own gold and invest in gold. But what about the risk of confiscation?

And if gold appreciates enough to maintain portfolio values, we’ll just end up paying capital gains taxes, depleting the portfolio again. What are your thoughts on that?

And remember… Kate and I read every note you send us. Please keep writing us at [email protected]!