We woke up this morning (in our bunk beds). I told the boys that overnight, the Federal Reserve had announced it would be printing money permanently in order to fund the U.S. government’s outrageous spending habits.

Not to “toot my own horn,” but I’ve been warning you that this would happen for months in these postcards. (It was obvious to anyone who cared to look at the plumbing underneath the banking system, which I did.)

The boys understood it immediately. (They’ve watched videos on the German hyperinflation of 1923.)

“So now the currency will start devaluing?”

“And everyone will rush to spend their money?”

“Because things will start getting more expensive?”

“You should invest it.”

Greetings from China! My ex-wife, three kids, and I are traveling around the world. We’re almost finished. Only Japan and the Pacific Ocean to go, and we’ll have completed the loop. (We started in Seattle.) The loop will have taken us 18 months.

We’re currently in Western China, traveling on the Silk Road. Next stop: Dunhuang, an oasis in the Gobi Desert and an ancient trading post…

Here we are in our bunk beds this morning… 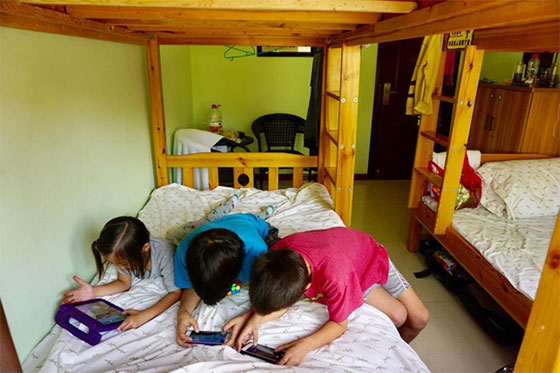 Even after the Fed said its new bond-buying program will be permanent, people STILL don’t see the big picture: The Fed is financing the U.S. government’s budget deficit through the money markets. In other words, it’s paying the government’s debt by printing more dollars out of thin air.

The chart below shows the size of the Fed’s balance sheet. For our purposes, that’s the total amount of money it’s printed and dropped into the system. 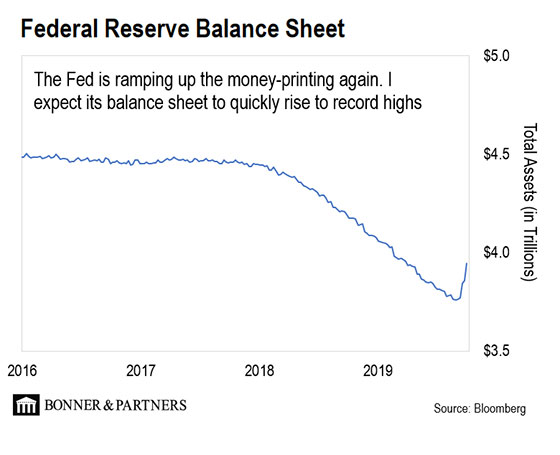 The decrease in this line since 2017 shows the Fed reducing the size of its balance sheet and unwinding the inflation it produced after the global financial crisis.

Now notice how the trend reversed recently and started rising.

Here’s my next prediction: The Fed’s balance sheet will quickly rise to record highs.

When people finally understand the Fed is financing the government debt, there’s going to be a money-quake in the financial markets.

I’m not exactly sure what this looks like. As I’ve said many times in these postcards, I’ve given up trying to predict the twists and turns the market will take as this drama unfolds. My only hypothesis is that – through it all – gold will outperform stocks. That’s why we’ve put all our money into gold, and it’s why I track the Dow-to-Gold ratio so closely.

Meanwhile, in China, we’re witnessing the most ambitious construction project in all of history.

Everywhere we go, we see cranes, bulldozers, and construction sites. China must be in the process of building 10,000 high-rise apartment buildings at this moment.

Not to mention all the buildings it recently constructed. Also financed by inflation, specifically $30 trillion in newly issued domestic bank loans over the last 10 years. And planned centrally by the Communist Party.

As I said yesterday, “We’re in the midst of the greatest financial experiment in all of history.”

P.S. If this experiment does go wrong, gold could rise hundreds of percent. But if it doesn’t go wrong, and the experiment turns out fine, gold may fall 10% or 20%. Not a big deal.

In the past, people have hesitated to hold gold because it doesn’t pay interest. These days, savings accounts don’t pay interest, either, so there’s no penalty in owning gold.

What I’m getting at is that gold is a great bet right now.

P.P.S. I’m a gambler and a speculator at heart. (I bought my first stock at age 11.) I’m also an extremist. I’ve also just recovered from black depression.

I put every cent we could muster into gold, silver, and mining companies. But I’m not suggesting you do the same.

As I’ve explained many times in these postcards, investment success is about achieving dominion over your emotions. The market is a bucking bronco. If you don’t have complete conviction in your position, you won’t be able to hang on when the ride gets rough, which it definitely will.

Start slowly. Buy a couple of gold coins or some silver exchange-traded funds (ETFs). Lighten up on your index ETFs and passive equity funds, if you have any.

Reader comment: Love reading your postcards, which have inspired me to add to my gold investments. You remind me of a young Bill Bonner. Today, Bill stays in his French chateau and Argentinian ranch. Tom and the family stay in $10 hostels. Bill doesn’t mind slumming it, either, getting his hands dirty in his new house in Waterford or the ranch in Argentina. I think Tom could be the new Bill Bonner when this Dow-to-Gold ratio plays out.

Tom’s response: You can’t know what a great compliment this is. I’ve been reading Bill’s diaries since 2002. I loved them so much, I wrote Bill and told him I’d quit my job at Salomon Brothers and come work for him for free. I’ve told this story before here.

So Bill has been a huge influence on my writing and thinking. I’m glad it shows. It means I’m doing something right. But I still have a LONG way to go before I’m even in Bill’s state, let alone his ZIP code.

Reader question: I am really enjoying your postcards. Are you aware of a program for travelers called Workaway? It’s like Airbnb for volunteers.

Tom’s response: Yes! We’ve used it. We took a volunteering gig at an elementary school in Rwanda. It was a great experience. They gave us board and lodging in exchange for our labor. I helped build a website, and Kate and the kids reorganized their library.

Reader question: What would you consider to be a safe world currency to put dollars into, besides gold?

Tom’s response: Great question. I’ve thought about this a lot as we’ve traveled around the world. Obviously, I think gold will rise against all paper currencies. If I had to hold a paper currency, my first choice would be the U.S. dollar. My second choice would be the Swiss franc, Japanese yen, or British pound. There’s a weird dynamic at play, where the more a currency has been borrowed and used in carry trades, the more it seems to want to rise.

Reader question: It may be very hard to sell physical gold in a crisis, as so few people even know what it is. Thoughts?

Tom’s response: Maybe. But I seriously doubt it. I imagine when the Dow-to-Gold ratio hits 5, gold will be the hottest investment on Wall Street, and taxi drivers will be recommending it to their fares. We won’t have any trouble selling it into the “buyers’ market.”

Tom’s response: Great question. I use the Dow as a proxy for ALL stocks around the world. I know there are other indices that represent all world stocks better than the Dow, but I don’t care. The Dow is good enough for our purposes, and it’s my favorite stock index.

Reader question: I thoroughly enjoy your postcards each day. My brother and his wife homeschooled their four kids. Their kids are outperforming most others and are still well-rounded.

Unfortunately, I am semiretired and have very little discretionary income. Any investing thoughts for someone like me?

Tom’s response: Assuming you’d like more money, your focus needs to be on your income. It sounds like you might have some spare time. Have you considered a home-based business?

Reader question: If gold is a true store of value, how come my holdings buy less today than in 1980 or 2013?

Reader comment: I recently began following your postcards and am filled with much appreciation for the courage it has taken to go on this journey with your family and the courage you have shown by taking the steps to speak about your journey with depression.

Tom’s response: Thanks for the kind message. Keep sending us your comments – along with any questions you may have – at [email protected]. Kate and I read every one of them.