Please Note: The Postcard from the Fringe archive will remain open until March 31, 2022.
After that date, its pages will be closed permanently. Please see the December 17, 2021 Postcard for more information.

DETROIT, MICHIGAN – Here I am at Michigan Central Station, Detroit’s once-glorious train station. It had been derelict for 30 years, but in 2018, Ford Motor Co. purchased it. They have big plans for it…

(More on Detroit, below…) 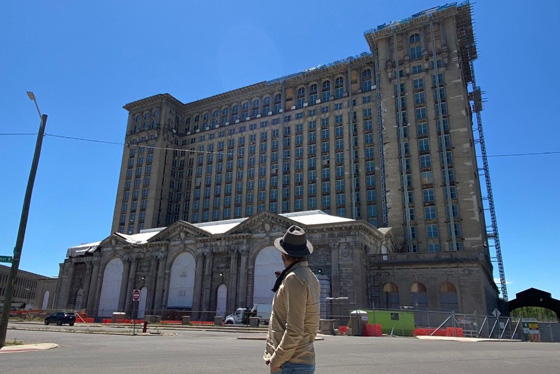 Standing outside of Michigan Central Station

Kate and I are camping in a driveway about 45 minutes northwest of Detroit. We took a break from driving and today, I went downtown to see the city. I went with a local to guide me.

When I last came to Detroit (in 2006), I went to report on the city’s real estate collapse. The city was on its knees. Huge swathes had been abandoned. They were selling big houses for $1 each, and I even saw an elegant 38-story Art Deco skyscraper on sale for $4 million.

Nature was taking over. Trees were growing through skyscraper windows. Foxes and coyotes were wandering around. No stores. No restaurants. No workers. It was a bit apocalyptic…

They’re even building a new skyscraper on the site of the old Hudson’s department store. No one’s built a skyscraper in Detroit in decades…

This is the atrium in the Fisher Building, one of Detroit’s most iconic skyscrapers. The Fisher Brothers – who made a fortune from the automotive industry – set out to build the most beautiful building in the world. They told architect Albert Kahn to spend whatever it took.

It was built in 1928, just before the Great Depression started… 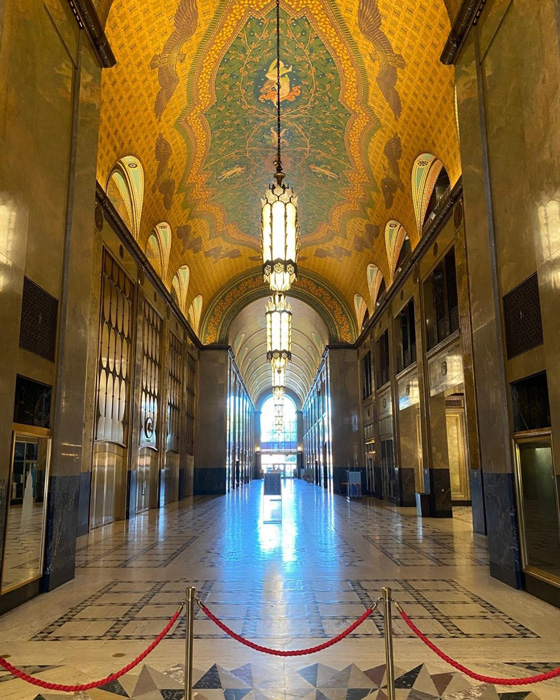 The exquisite atrium in the Fisher Building

“I was born in Detroit and I’ve lived here all my life,” says a local reader I met with for breakfast yesterday.

“We were the arsenal of democracy. We used the assembly line to turn out tanks, planes, jeeps, guns, ammunition, etc. You couldn’t believe how many airplanes a day we were rolling off the assembly lines. We could out-produce the Germans by 10 times.

“It created thousands of jobs and Detroit became a magnet for workers. People were coming in from all over. Detroit was the greatest, most-powerful city in America in the late ’40s.

“My mother came here from Pennsylvania. I was born in ’48, during the baby boom. Times were totally different. There were at least 100 kids living on our street. We would get up in the morning. And we would play all day outside, unsupervised. We’d play baseball. We’d play football. The adults would just say, ‘Be home for dinner.’

“A big treat for us when we got older would be to go downtown. We’d take the 6-mile bus and go up Woodward. Go to the big department stores like Hudson’s. Everything was downtown. The movies were always released downtown. So we would go down to The Palms. The Michigan. The United Artists.

“Things started to change when they started building malls. The first mall was Northland Mall. And that started to change things because people didn’t have to go downtown. But Detroit was still a vibrant town until the late ’60s.

“In the late ’60s, you could see it get more divided. And then the riots in 1967 – It was a shock to most Detroiters to see the city burning. And it just started a flight where the higher incomes started to flee the city. It started a cascade in real estate prices. The more prices fell, the more people rushed to sell. Prices just collapsed.

“People who’d lived in Detroit all their lives lost all their savings. And all the economic activity went into the suburbs, where they tried to recreate the urban experience in places like Royal Oak. In 20 years, Detroit went from being one of the most prosperous cities in America to a hollowed-out shell.

“It has been hard to watch Detroit’s fall, but then recently, Detroit has been rising from the ashes. There has been investment downtown. We’ve seen sports teams move back downtown. They’ve built new stadiums and new communities. I’d seen it in other cities, and I was wondering when it would come to Detroit. And it did come to Detroit, driven by Dan Gilbert. He’s bought up entire neighborhoods and a hundred buildings downtown. So hopefully that progress continues, and Detroit continues to attract investment.

“If the country continues to get more divided, then that progress might be at risk. I do worry about that. But Detroit hasn’t been an active participant in this latest uprising across America. People remember what happened in 1967 and how far it set the city back…”

In today’s mailbag, readers ask how the Dyson family funds their travels… expresses concern for safety deposit boxes and gold confiscation… and thanks Tom for his common-sense analyses and encouraging stories…

Reader question: I have a question about how you are paying for things on a daily basis. You stated that, “In addition to selling all our things and leaving our homes behind, Kate and I also converted all our savings to gold. Effectively, we chose to make gold our home currency during our travels, instead of the U.S. dollar.”

Exactly, how does that work? I assume that you aren’t traveling around with gold bullion and, therefore have some U.S. dollars or, just use credit cards or smartphone apps like Apple Pay to buy what you need and have a small amount of money for places that only take cash. Best regards and stay safe.

Tom’s response: Exactly. We keep just enough U.S. dollars to pay our traveling expenses, which we access with credit cards and from ATM machines…

Reader comment: Thanks for being someone capable of analytical thought (or even just common sense). That’s a great lesson to teach your children.

I am referring to you not treating COVID-19 as the plague and having your children and wife wear masks. I am an MD who has been in the trenches treating all manner of infectious disease for decades. Medically speaking, COVID-19 NEVER justified the government-mandated economic carnage, ridiculous quarantining of healthy children and adults (except the elderly and those with comorbid conditions), ridiculous social distancing that has ZERO science behind it, and calling for a dehumanizing “new normal” of human behavior.

Without the ridiculous agenda-driven hysteria of government and its lapdog, the media, this would simply look like a heavy flu season. Thanks for representing the real normal.

Reader comment: I appreciate your postcards. They are the right length and mixture of family and business. I have a suggestion for your consideration: After this road trip ends, consider another road trip covering North America, crisis crossing the land, and keeping us informed of your family, the economy, and what you see the common man experiencing. I’m thinking multiple trips, two or three times a year, or as the family allows.

Also, consider a GoFundMe page so the common man can assist you on this journey. Include a general call of your plan to this group and allow us to offer lodging or tent space on this journey. You can plan your trip around way point destinations. You will find kindred spirits in NA that would love to live through your adventures. Best wishes to Kate, your kids, and you. Be bold!

Reader comment: Safety deposit boxes are not really safe. My experience has been, when someone dies (your spouse, for example) safety deposit boxes are locked and you do not have access to them until an inventory has been taken and you must pay taxes on the value of the contents. Also, now, many banks are drive-up only. You can’t go inside to access your safety deposit box. And many bank branches are on reduced hours or closed entirely through COVID-19. Just some thoughts. Safe journey!

Reader comment: I’ve written many times asking for your opinion/advice on possible government confiscation of the gold bullion you persistently recommend everyone should be holding. I think you are being VERY remiss by not addressing this, particularly for your obviously increasing clan of inexperienced and unknowledgeable subscribers.

Surely, you realize that the longer you wait to do this, the more difficult and embarrassing it will be for you when you finally have to – and the consequential erosion of your subscribers’ confidence in you that will occur. You’re a very smart guy, Tom, and you can’t just leave this significant aspect of your subject unaddressed.

Tom’s response: This is probably the most common question I get about gold. Gold has been outcast from the international monetary system for nearly 50 years and does not play any official role in finance. I can’t see why the U.S. government would care – or feel motivated to do anything about – private citizens owning gold. The U.S. Mint even sells gold to the public! Gold confiscation is not something I worry about at all. (Gold was official money when Roosevelt confiscated Americans’ gold in 1933.)

Reader comment: I am a single of mom of two teenage boys and I would love what you are doing, but I don’t think I could handle it alone. I have, though, put most of my cash in gold, silver, and Bitcoin, so thank you for the advice and support that these could be solid moves. We live near NYC, but I am planning our escape. I can’t take it here. People are isolated now, and everything is boarded up and lonely. So we will either move to Utah or Costa Rica and wait this out also.

Reader comment: As a fellow gypsy (it’s in my blood, as my grandfather came from Romania to the U.S. in 1907), I admire and envy what you are doing. I laughed out loud when you called yourself “flexitarian!” Flexitarian in many ways you guys are, not just with food. You all are flexing the muscles of problem solving, adaptability, friendliness, resiliency, and, quite purely, JOIE de VIVRE ( but not “perfection” of life). Wishing you all happy and safe journeys.

Reader comment: So great to see the hospitality and number of people opening their homes to you and your family. It gives one a little more faith in the kindness of people these days.

Reader comment: I read, with great interest and enjoyment, your installments of Postcards from the Fringe. They are warm, compassionate, and informative. I hope you keep writing these.

Reader comment: Your postcards are the most refreshing thing on the internet! Reality meets surrealism. “Down Under” Australians are 99% asleep. They don’t have the first idea about what is happening in the U.S. They don’t do any independent research. They get their information solely from the mainstream media and they parrot these views as if they are the gospel truth. They most certainly don’t understand the underpinning reasons for this orchestrated world-wide health and financial catastrophe.

Our own family and friends are in that category. My husband and I find it bizarre and deeply unsettling. It is like Australia as a whole is smoking pot and is in La-La Land. Mass stupor. We want to help people wake up, but every time we try and gently raise awareness, friends and family accuse us of being conspiracy theorists.

Reader comment: It has been a pleasure to read your Postcards and family adventures. I do a bit of traveling to many small and rural towns around the U.S. It is an interesting view of the country. The level of economic displacement is hard to believe. My work also takes me to Native American communities. The closest thing I have seen to third-world style governance in the U.S.