YUETIAN BUSINESS HOTEL, DUNHUANG – We made friends with a small-business owner – Jane – in Zhangye.

“I was a tour guide in the rainbow rock park,” she said. “One day, a friend gave me 10 silk scarves and asked me if I could sell them on my bus. I sold all 10 of them.

“The next day, I asked him to bring me more scarves. I sold those too. I’d been a tour guide for five years, so I knew all the other tour guides. I got scarves for them to sell on their buses too.

“Shops don’t sell many scarves. But tour guides can sell them easily on buses. I realized this was a good business. So I went to south China, and I found a factory to make silk scarves for me.

“That was seven years ago. Today, I’m selling 40 thousand scarves a year, and I have more than a thousand tour guides distributing them on buses…”

Greetings from China! My family and I are hobos. We threw everything away, and now we wander the planet staying in cheap guesthouses and living out of a suitcase.

We educate our children ourselves, using a combination of YouTube videos, materials we carry in our suitcase, and real world experiences.

And apart from the few dollars we keep aside to pay for our traveling expenses, we don’t have any money. We turned everything into gold and bet it all on a crash in the Dow-to-Gold ratio.

It’s been quite a ride!

We’re currently in the Gobi Desert, in western China, traveling the old Silk Road. Today, we’re in a town called Dunhuang, staying in a $15-a-night hotel.

It’s a big hotel, with five floors and at least a hundred rooms. But I think we’re the only guests. Here we are in the hotel lobby… 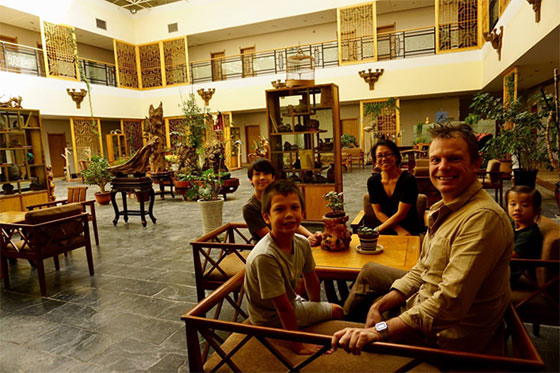 The other day, we were on a train. A railway employee came down the center aisle of our carriage with a box of toy trains. They cost $14 each. She sold every one! And there wasn’t a single child among the buyers.

Everywhere we go, people are shopping, spending money, wearing Western brand names, and walking around with Starbucks cups and iPhones.

It’s a total contrast to other places we’ve been in Africa, India, and even Southeast Asia. China feels like the West in terms of consumption.

The funny thing about Jane’s scarves is, they’re fake. She was wearing one. The label said “pure silk,” but Jane confided in us later that they are really made of polyester.

As she confessed, I thought about all the empty train stations… ghost cities… and bridges to nowhere we’ve seen since we crossed into China. And I wondered if everything’s fake here…

P.S. A brand-new road with no traffic that we traveled on this morning in a taxi. The shrubbery at the edges of the road is artificial landscaping. (We are in the Gobi Desert.) I’ll never get bored of publishing these images… 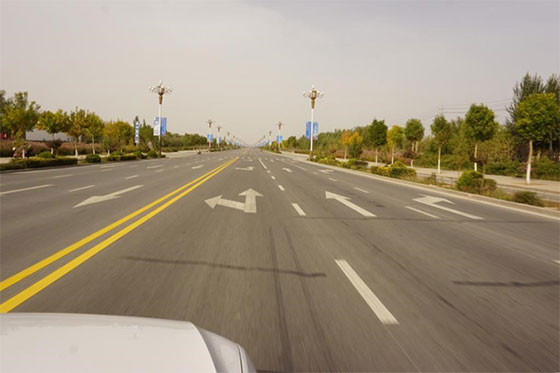 Fake shrubbery along an empty new road in the Gobi Desert

In today’s mailbag, your fellow readers write in about the best uses for gold… how it will fare in the next recession… and Tom’s battle with depression…

Reader question: If we are heading into a recession like 2008, don’t you think the gold price will drop with stocks, and the U.S. dollar will be the safe haven temporarily? If so, wouldn’t you recommend waiting until the recession to buy gold, and holding cash in the meantime?

Tom’s response: Good question. I used to get seduced into this line of thinking too… trying to figure out the various twists and turns gold, the dollar, and stocks make as the drama unfolds.

You might be right about gold falling before it rises. The late Richard Russell predicted this too. “Cash now, gold later,” he used to say.

But I won’t be playing these timing games. I think the massive financial experiment the Federal Reserve and other central banks are running will fail at some point, and the entire financial system will get restructured.

It’ll be such a complex drama, I can’t even begin to predict how it will unfold. So I’m going to sit on the sidelines – in gold – and keep out of harm’s way. Then, I’m going to buy stocks when they’re cheap again.

From this perspective, ours is a very simple bet that gold outperforms stocks over the next five to 10 years. I think it’s a very clever way to distill a very complex situation.

Reader question: I have a small house that is not being used. I intend to sell it soon. Do you believe this will be the best investment for the next 10 years? Would it be better to keep the house or convert it to gold?

Tom’s response: Can’t comment on your specific situation, but I’d much rather have a big pot of gold than a house, if given the choice. This probably won’t come as a surprise, given that we don’t have any possessions, we currently live out of a suitcase, and we converted all our savings to gold.

Reader question: I know you use the Dow-to-Gold ratio to determine when to be in gold and when to be in stocks. Have you done any backtesting on the S&P 500 to gold, or even the Wilshire 5000 to gold? Do you see the small sample of 30 stocks in the Dow as a reliable indicator for such a significant decision? Looking forward to your next postcard!

Tom’s response: The 30 Dow stocks may not be the best proxy for the world equity market, but they’re close enough. And the Dow is my favorite index to track. Besides, when the time comes to buy stocks again (at a Dow-to-Gold ratio under 5) I will buy “dividend aristocrats” – preeminent companies with long records of raising their dividends. The Dow reflects these companies well.

Reader comment: Just read your essays about depression. You did good! I lost my brother to EXACTLY what you described. What I found interesting in your writing was that my brother did much like you. Years ago, he left town on a motorcycle. He came back eight years later, after making it to the tip of South America. Before he passed, he often reflected on how he was blessed and had a wonderful life, I’m sure thinking of that trip all the while.

Reader comment: Like everyone else, I really enjoy your postcards. Traveling is such a great education for your children! They are the perfect age for this adventure. When they are teenagers, they have other plans…

Reader comment: Your letters from China are fascinating. I enjoy every one. I can feel that you are having fun. To just quit your job and travel the world – with your kids and your ex-wife, Kate – is unbelievable. And CONGRATULATIONS for getting re-engaged to Kate!

Reader comment: I’m enjoying Postcards From the Fringe. Your entire family will be in my prayers starting tonight! I really love your stories and especially you sharing your heartfelt struggles.

Reader comment: I found your website a few days ago. I think you’re amazing, especially for the courage to take your kids around the world.

Tom’s response: Thanks for the kind messages. Kate and I read every one of them. Keep writing us at [email protected].