WEST PALM BEACH, FLORIDA – We were in Japan last year.

Japan has the good fortune… from the railway engineer’s perspective… of being long and narrow. So all the big cities lie – more or less – in a straight line. Bullet trains run up and down this “spine” at 200 mph, stopping at the big cities.

There must have been hundreds of bullet trains in service at any time, because no matter what station we went to, we never had to wait more than a few minutes for a train to come.

We’d just show up at a station, wave our unlimited rail pass at the station master, and jump on the next train.

Next thing we knew, we’d be flying across the countryside as fast as a jet plane. No security. No passport check. No waiting at all.

(In China, we’d have to buy our tickets several days in advance and then get to the train station 90 minutes early to go through security, passport control, and boarding inspection. It was like catching a plane out of LaGuardia – before the lockdown, at least.)

While we were there, we went to Nagasaki on the train. We toured the A-bomb museum and Peace Park. Then we visited the “hypocenter” of the bombing. Here is Penny (7) at the hypocenter… 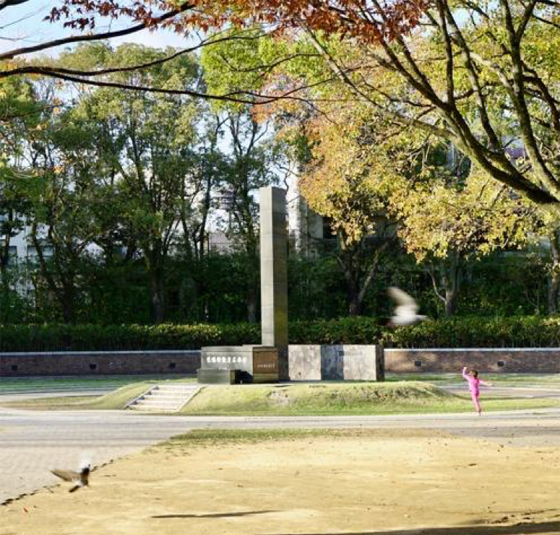 Even though the memorials weren’t big or flashy, Nagasaki felt somber and poignant. But it wasn’t the only place that touched me on our travels…

The 18 months we spent on the road were the happiest of my life. I loved India, especially northern India.

Underneath all the honking tuk-tuks and craziness, and despite Penny’s accident and my mother nearly dying on the other side of the planet in London, I felt a deep sense of serenity and calm there. Like there was magic in the air.

Towns like Jaisalmer, Jodhpur, and Pushkar touched me very deeply.

Or Egypt. Where we lived among the Amazigh people in the Great Sand Sea near the border with Libya.

Or that time we hired a Bedouin guide and went hiking in the El Tur Mountains of Sinai, to the spot where the Bible says Moses received the Ten Commandments. Or the day we spent by the Suez Canal watching gigantic oil tankers sail past…

I was a total mess when we began our trip. I had the shakes. I had insomnia. I had lost my business and my job. I’d lost 20 pounds. I was taking pills. And I was thinking a lot about suicide.

I hadn’t given up yet. But nor could I see a path to turning things around. I’d tried everything. I was beginning to lose hope.

Then, Kate gave me a hand and helped me up off the ground.

From that moment on, I had so many incredible experiences. All of them with Kate and my three children right beside me. We barely left each other’s sides. I felt so close to Kate and the kids. I didn’t want the trip to ever end.

“It doesn’t have to end,” I said to Kate as our trip was drawing to a close. “As long as we’re together, the adventure will keep rolling on.”

It’s been almost four months now since we returned to America. And after spending 54 days in quarantine at Kate’s parents’ house, we’re starting to feel the homebody inertia.

Reader comment: My congratulations on the “parcours” you have done in recent years. I live in Belgium. Not too far away from the Hergé museum (I mention this because of Penny’s t-shirt). I started reading your adventures a while before you went to Hong Kong.

My youngest daughter is living with her mother. We separated a few years ago. On my birthday, on March 12, I was invited to her mother’s house to have some cake. But their purpose was to know how I feel about my daughter not going to school anymore, but to homeschool herself. Without reading your Postcards, I would have strongly opposed this idea. So my daughter and her mother were a little bit surprised I agreed easily on giving it a try for one year. My daughter is 14 now. Tom, you have such good writing skills. Although I already have been reading your Postcards, I still want to read them again in your book. Will it also contain some of your financial considerations?

Tom’s response: Yes! I’m busy writing my book this week. It’s going to be a collection of postcards from the whole trip, most of which I’ve never published before.

Reader question: I have a question about inflation/deflation. Am I right that inflation and deflation happen at the same time?

Tom’s response: Yes, currency debasement doesn’t hit the economy evenly. Some prices go up a lot. (Gold and other commodities, for example, I expect will be big winners. House prices in Washington, D.C. should also do well.) Other prices go down.

Reader question: What do you think about this quote by Henry Ford? “It is well enough that people of the nation do not understand our banking and monetary system, for if they did, I believe there would be a revolution before tomorrow morning.” Is this just a nice quote or did Henry Ford understand how the central banking system works in transporting money from the many to the few? And would you be able to describe how this works?

Tom’s response: As long as we are comfortable, safe, and our credit cards work, no one cares about the workings of the system. The problem is, I think people assume it’s stable and safe. What they don’t realize is the system has become very unbalanced… and nature abhors an imbalance. It desperately wants to reset itself. And the feds desperately want to keep it going. Something’s going to break. And when it does, gold will soar.

Reader comment: Love your letters and what you are doing with the kids. We did the same thing (without the travel) about 45 years ago. Was very frowned upon then.

Tom’s note: Thanks for your messages! Kate and I read every one, even if we don’t publish a response right away. Please keep writing us at [email protected]