To recap, there’s a giant puddle – or, rather, a lake – of oil forming. Why? Because supply is greater than demand and storage is full, so there’s nowhere oil can go.

Meanwhile, the price of oil is crashing.

I think we’re going to be living with supply exceeding demand for at least a few more months. Maybe longer.

And this is in spite of whatever cut to production the Organization of the Petroleum Exporting Countries (OPEC) says it’ll make.

(OPEC recently agreed to cut production in May, to end the Saudi-Russian oil war. Now, some OPEC members are considering cutting oil production right away, instead of waiting until next month.)

All the while, the lake of oil in storage gets bigger and bigger.

But that’s not the end of the story. Because then we have to use all the oil we’ve saved up. And that’ll require demand to be greater than supply for a while.

I think this process is going to take A LOT longer than people think. A couple years perhaps?

But the market doesn’t understand this yet.

The oil market is still anticipating a V-shaped rebound. It’s underestimating how big the glut’s going to be and how long it’s going to last.

This chart is a good example of what I’m talking about. It comes from Goldman Sachs… 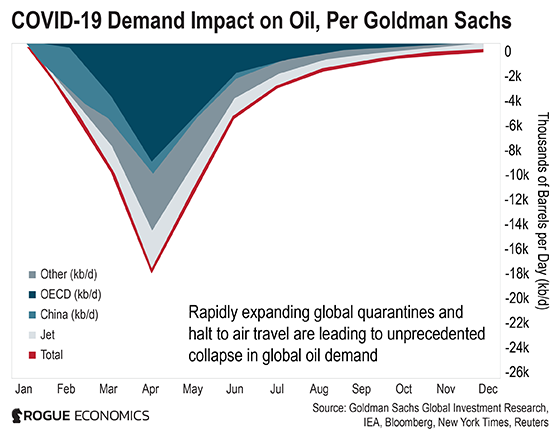 Basically, it shows that demand for energy will all be back at normal levels by this summer. This is far too optimistic.

With this in mind, I’ve been looking at the oil tanker business. Tankers are the big ships that transport oil… under normal circumstances, at least.

With what’s going on now, the oldest ships are being turned into floating storage tanks. The newer ships will continue transporting oil.

Either way, as long as there’s a glut of oil flooding the market – which I think could persist for a year or two – oil tanker companies are going to be very busy.

We can see this in oil tanker rates.

The rate to lease an oil tanker is called the time charter equivalent (TCE) rate. It’s expressed in thousands of barrels per day.

And this year, rates for oil tanker ships have soared.

This first chart comes from one of the big shipbrokers. It shows average annual TCE rates going back 14 years… 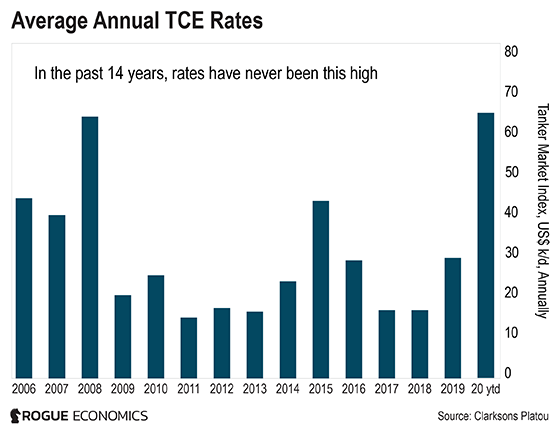 The rates shipping companies have earned so far in 2020 – as far as I know – are the highest rates they’ve ever been paid. (2008 was considered the banner year up until now.)

This next chart shows the recent activity in tanker rates, broken down by ship class. (They published this chart last week.)

* = segment weighted average
^ =based on Caribs/US route only

There are several classes of oil tankers. The largest ones are called VLCCs, which stands for Very Large Crude Carriers. They carry 2 million barrels of oil.

Anyway, as you can see in the table above, tanker rates across all the classes except one were still RISING last week.

But the great thing about tankers is, these charts actually UNDERSTATE how much money oil tankers are making at the moment.

Tanker firms use tons of leverage, and they have fixed cost structures.

Most of the cost of owning a tanker is the construction of the new tanker. So once they start earning TCE rates above a certain threshold – called the breakeven rate – every dollar goes straight to the bottom line, magnified by leverage.

It’s possible that, this year, many oil tanker firms will earn their entire market values in one year.

The bottom line is, tanker stocks are going to make more money in 2020 than they’ve ever made before.

P.S. Fuel is a big expense for an oil tanker shipping company. The price of fuel just got a lot cheaper…

P.P.S. Last year, I took my family to see the Suez Canal in Egypt. We spent the whole day watching oil tankers pass by. The tankers that pass through here are called Suezmax, and they hold a million barrels of oil. (VLCCs don’t fit through the canal.) It was one of my favorite memories from our trip. 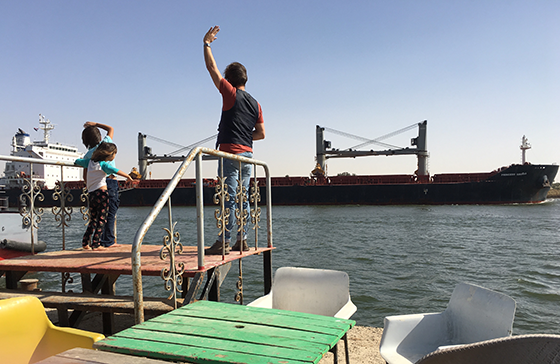 Reader comment: I read your Postcards faithfully. The one attribute that comes through loud and clear is your sincerity. True sincerity cannot be faked, although the charlatans keep trying. I think you are accomplishing more good in this venal world than you can imagine.

Reader comment: Futures markets should tell something about the best advice in commodities. From the daily WSJ we read oil/natural gas/gold going from May to December… Oil $20-34, natural gas $1.59-2.93 (January ’21), gold $1,727-1,745. So, oil jumps 70%, natural gas 84%, and gold 1%. This does not seem consistent with expected business activity and demand. And gold, clearly, does not care how much the Federal Reserve adds to fiat currency. I’m confused. What use is made of the futures data? Or is it to be ignored?

As a commodity trading pro once told me, “The best estimate of the future price is today’s price.”

Reader comment: How does Tom Dyson support himself and his family, and pay for all the traveling? And if he’s some kind of financial expert, why do he and his wife have whole life insurance policies? Surely they know that they are way more expensive than term life, and that the cash value they accumulate is not added to the face value of the policy when one of them dies.

Tom’s response: We support ourselves from income we receive from writing these Postcards. And we are very careful about our expenses. I don’t have space to unpack the rationale for whole life insurance here, but I have studied it from every possible angle and we bought whole life as a savings vehicle, not for the death protection. It works.

Reader comment: Great to read your thoughts and travels, and loved it when you were traveling. And also with Mum and now the Florida grandparents. Not sure what would happen if we all went into gold (which I think everyone should hold some), but in reality, we as a civilization need to create real wealth which only happens in farming, mining or manufacturing. The rest of us simply manage that wealth. God bless you all, keep the writings coming!

Tom’s note: As you know, your messages are integral to these Postcards. Please don’t stop writing us at [email protected].