A CABIN IN THE WOODS, MINNESOTA – Let’s see…

Stocks are more or less unchanged…

But tanker stocks are rallying today. They’ve been beaten up recently… so they were due for a rally… (More below.)

A Tornado at the Cabin

Greetings from a cabin in the woods…

We’ve taken a break from driving, and we’re going to stay in this cabin for a week and hopefully catch our breath.

Next week, we hit the road again… heading south to Iowa. We’re going to spend a couple of days on a hog farm learning about hog farming.

Then we turn west, heading for the Badlands and Mount Rushmore…

Last night, we had a windstorm at the cabin. It lasted about an hour and woke us all up. Then it was calm again. It might have been a tornado? I don’t know.

This morning, I wandered around and inspected the property. Lots of branches down. Some chairs had blown over. And our boat had been blown from its cradle.

The damage this morning

“Life in the country,” I thought…

Going back to the markets, my big trade is a bet that stocks will fall.

Most people measure the stock market by its nominal price movements. That is, the headline numbers you see reported in the newspaper and on the television.

But I measure the stock market – and nearly everything else now for that matter – in terms of gold.

Oil Tankers: Our One Exception

When viewed in terms of gold, the U.S. stock market has been falling for 20 years… 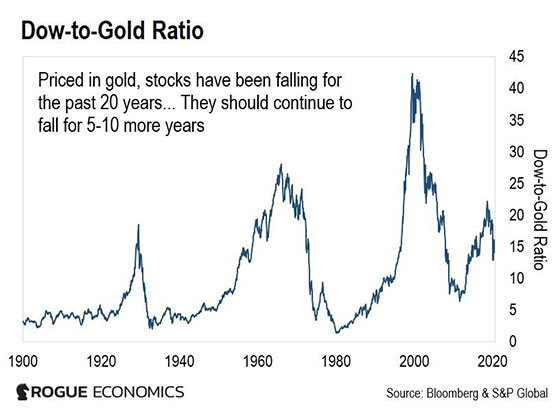 My hypothesis is that once these trends get in motion, they tend to stay in motion… until they reach an extreme of either cheap or expensive.

That’s been the case for the last 100 years or so.

We had an “expensive” extreme in 1999. So I’m betting the stock market continues to fall in terms of gold for another five to 10 years or so… until it reaches a point where we might call the stock market “cheap” again.

Until then, I refuse to own stocks, and Kate and I will keep our savings in gold.

The one exception to this plan is shipping stocks. They’re the only stocks I’m willing to own.

Shipping stocks have been destroyed since 2008. They are the most unloved, unappreciated, undesired sector on the planet.

And it appears they’re finally turning the corner and beginning a new bull market.

P.S. Here’s the next episode of the Dyson family rambling videos, where we answer your notes about traveling… oil tankers… and the real reason why Kate hides behind the camera… (As always, please keep your feedback coming at [email protected]!)

Reader comment: I guess I am lucky to have known four girls who asked me to go overseas with them. It changed my life forever as I have not stopped traveling. Meeting people from all over the world, you realize it is never the way the news portrays it. My biggest surprise is how similar we are. The heart is the same. The part above the neck? Now that’s another story, conditioned depending on where you were brought up.

It was a cheaper life to travel than living at home with never-ending bills, rates, car, insurances, the list is endless. Oh, and by the way, I did work around the world. The only place I encountered where no one spoke English was Madagascar back in 1974. See the world before you leave; you cannot put a price to it.

Reader comment: I know why you chose a pop-up camper for minimalist reasons, but you can’t fool me about that 100-year-old cabin. It has been extensively reworked and brought up to modern standards, especially the new windows and door with screens. Definitely non-minimalist. But probably the screens are a good thing. You have tender and delicate children that are no match for the Minnesota mosquitos, and you and your wife don’t need to risk Zika virus infection. Enjoy.

PS. An uncle of a dear friend of mine went around the country depositing $5000 in every bank, savings, and loan he could find along the way. Then, he developed Alzheimer’s or Senile Dementia, or whatever, and could never remember the names of any of the banks where he made his deposits, or where he kept his records. This probably happens a lot.

Reader comment: I do enjoy the videos, Dyson family. I like the interaction. Apparently a “raise your hand” rule has been implemented. Penny does very well and shows great patience. Good job, Penny! Of course, this audience is very aware that there is one missing participant in many of the videos…(come on Kate!) You guys stay safe and keep them coming!

Tom’s note: Thanks for the kind words! Please keep sending us your questions and comments at [email protected]. I read them to Kate and the kids every day.

I’ll never reveal your identity or any identifiable details when I republish your message.