WEST PALM BEACH, FLORIDA – Just when I thought the oil storage issue couldn’t get any worse…

Yesterday, I read about the fleet of Saudi-controlled oil tankers steaming toward America, bringing 50 million barrels of crude oil. (More below.)

Two years ago, we sold everything, turned our savings into gold, and became a modern American gypsy family. We traveled around the world, homeschooling our children. We had the time of our lives.

The trip was such a positive experience for us, we decided to become permanent traveling hobos.

We were about to begin a new South American adventure…

…when the coronavirus struck. We had to shelter in place.

Luckily, we were with Kate’s parents. They invited us to stay in their house. They said we could stay as long as we’d like. That was 43 days ago…

I’m writing to you today from the quiet corner of the house I use for writing these messages.

Kate and the kids are doing their schoolwork. Kate’s parents are preparing dinner. And I’m writing this message by hand in my notebook.

In two weeks, we’re hitting the road again. We’ve bought a towable camper from Craigslist. It’s 13 years old and we paid $1,500 for it.

We’re planning to drive around America with it and sleep in campgrounds. We’ll see…

In the meantime, we’ve had a great time here. The kids have loved being with their grandparents after two years of traveling. And I’ve been able to work.

I’ve worked harder in the last four weeks than I’ve worked in years. I’m preparing to launch my premium newsletter… which I was very apprehensive about doing at first.

And I’m turning a years’ worth of postcards into a book about our trip.

My feeling is, we’re going to be dealing with a lake of oil for possibly as long as the next two years.

Everyone expects a V-shaped recovery… including, it seems, the oil market. And I don’t think anyone’s prepared for a long supply glut in the oil patch…

First, oil producers are about to do whatever it takes to stay in business. Everyone thinks they’ll just turn off the taps and cut supply. But that’s not what’ll happen.

They are in a state of denial about the future. And they will keep pumping oil no matter what.

And even once we find equilibrium between supply and demand… we’re still only halfway through. Demand must then outstrip supply to draw down the glut.

Oil investors had a reality check this week… but I think this is just beginning.

If this thesis is correct… oil tankers are going to be incredible investments over the next two years.

“Turn the Tankers the Hell Around”

Look at this news…

Saudi Arabia has loaded 20 VLCCs with crude oil and sent them to America. They’re en route as I write. And they’ll be arriving at America’s Gulf Coast in May. 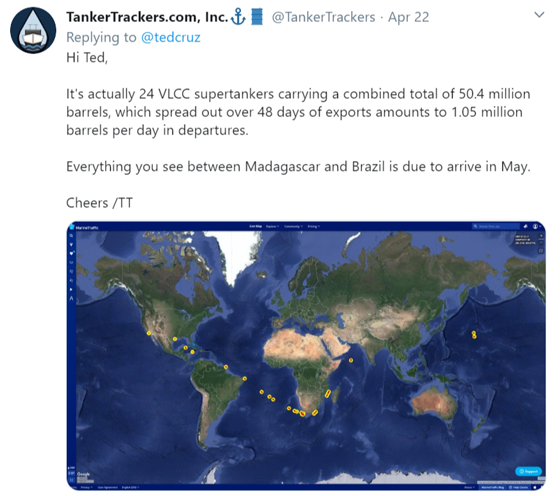 The president may prevent these tankers from docking in America. The Saudis would have leased these tankers at rates over $200,000 a day.

If they can’t unload their cargoes in Texas or Louisiana and have to sail to Europe instead, it’ll add many more days to the route… and generate millions more dollars for the shipping companies.

The shipping line that owns these tankers will make a fortune if this happens.

P.S. There won’t be many new ships entering the market for at least three years. It takes at least two years to build a new oil tanker and the order book for new tankers is the lowest it’s been in two decades.

Reader comment: Funny that Tom should comment on the costs of an oil tanker. I did some back-of-an-envelope calculations after doing some pricing myself on Monday. Had one bought a tanker full of oil at -$37 on Monday, then sold it today at $10, they could have paid for the tanker in full, then begun charging storage fees for the oil in it! I wouldn’t be surprised if someone actually did that trade.

Reader comment: Thank you again for your daily letters! They are always inspiring, interesting, and informative. And thank you for your comments about USO on Tuesday. I’ve been chomping at the bit to somehow invest a small amount in oil stocks while prices are so low and USO was one of the names I was considering. Now that I know about the structure underlying USO, I will be sure to look for opportunities elsewhere.

Reader comment: Keep doing what you are doing, and writing. Since April 1972, I’ve been reading and studying research on gold and the gold market, and on gold’s monetary role through history. The first newsletter writer I ever read was Richard Russell and his Dow Theory Letters. For me, you belong in the same league as Russell. I believe what you write about gold and the economy is helping many people. I know it is helping me, and I find your way of sharing to be deeply personal and meaningful.

Reader comment: I’m exhausted, discouraged, and disappointed. Tried everything to no avail. Have always had a wanderlust. Just not the means to see it through. Even willing to travel as a lone female. Maybe, after all of this is over, I will start small. Weekend trips. Can you share any ideas on affordable traveling? Thanks. And strength for the journey.

Reader comment: Regarding the gold ETF GLD: In the Postcards on March 24, April 7, and April 13, you expressed your aversion for GLD in various ways… including that you don’t trust it and that there’s something “screwy” about it. However, in The Bonner-Denning Letter in June of 2019 and March 25 of this year (one day after disapproving of it in Postcards) you recommended it. Can you please explain this discrepancy?

Tom’s response: I recommended GLD in The Bonner-Denning Letter last year. Since June 26, 2019, that recommendation is up 19.14%. The thing about GLD is that it doesn’t have clear language in the prospectus about being able to redeem shares for gold. It also has the highest expenses in the industry at 0.4% a year.

With what’s been happening this year in the financial system – and especially after what happened in the oil market this week – it’s even more important to me to know that when I’m buying a gold ETF, I’m buying actual physical metal and not just a proxy for the gold price. So even though GLD has done well since I recommended it in The Bonner-Denning Letter last year, I wouldn’t recommend anyone buys it today. That’s why, in the issue that came out yesterday, I gave Bonner-Denning Letter subscribers a new play on a gold ETF, for those who haven’t gotten in yet. Sorry for the confusion.

And, as always, please keep writing us at [email protected].