SWEET HEART GUEST HOUSE – Our taxi pulled up at an empty intersection. The road was closed. There were bricks and other junk in the road.

A group of protesters sprinted past.

A big black truck was coming now. It was the police in a big armored car.

A cop was firing at the protesters from a gun mounted on the roof of the truck.

“Daddy, they’re shooting at them…”

Greetings from Hong Kong! My family and I are on the ultimate homeschool field trip, showing our kids the world and teaching them on the road…

So far, we’ve traveled across America, Europe, Africa, the Middle East, India, Southeast Asia, and China. We’re currently in Hong Kong, getting a lesson in police brutality and freedom fighting…

There is conflict in Hong Kong between students and police. It started as a peaceful protest five months ago. The protests were legal and happened only on weekends. But they’ve escalated. And turned violent. And they’ve started battling on weekdays…

I went to lunch today. The subway was closed. I had to take a ferry instead.

I went to the Harbour City mall, the biggest mall in Hong Kong. Normally, it’d be packed at lunchtime. But most of the shops were closed, and there was hardly anyone around. There were mostly empty tables in the restaurant we ate at.

The subway station was smashed up. There was graffiti everywhere.

Then in the evening, we went out to dinner as a family. We couldn’t go by subway because the walk to the restaurant would have been too risky. We took a taxi instead.

We were the only customers in the restaurant. They asked us to leave as soon as we’d finished eating, so the staff could get home early.

We got in a taxi. I assumed we’d be staying out of trouble by taking a taxi… until we came upon that intersection… 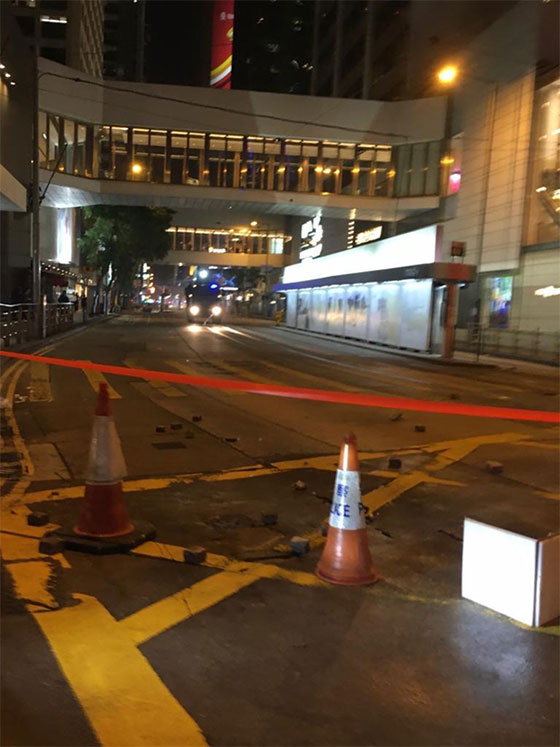 We took a taxi to stay out of trouble. But then we
ran into this armored truck…

Here it is blasting protesters with pepper bullets. We were close enough to see smoke coming from the gun’s muzzle. The kids saw everything… 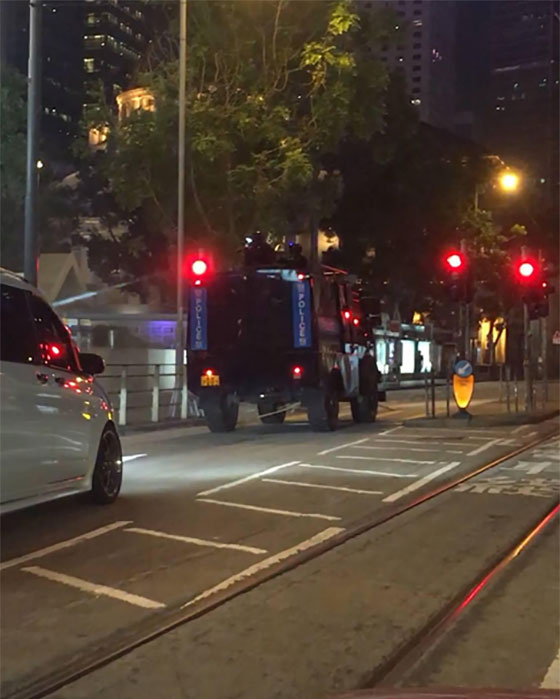 The kids watched as police blasted protesters
with pepper bullets

We’re safely back at our hotel now (we’re in a new hotel tonight, with windows).

The kids were a bit traumatized from seeing the police shooting at people… but we had a good conversation about it, and everyone’s asleep now…

P.S. The police are being very aggressive. Why did they shoot tear gas near where I was standing on Monday night? We were just a bunch of tourists and commuters watching from the sidelines. It was unnecessary.

Why were they charging around in their armored car shooting at people like that? I saw a full report of the incident on Twitter a few minutes ago. The area had been calm all evening.

And why did they attack the university campus yesterday?

They don’t seem to be working for peace. I don’t have any sympathy for them.

Readers want to know more about China’s relationship with gold after Tom wrote Chinese people aren’t heavy gold buyers. Also in today’s mailbag: What are the costs of traveling with kids? And do the Chinese really like all the surveillance in their country, like they say they do?

Reader comment: Contrary to what could be expected after 18 months of a nomadic existence, more excitement with every day is palpable in your writing. That raises a question, “Why should this trip end?”

Reader comment: Hi Tom, Kate, and family. I am a new reader of your adventures and have enjoyed keeping up with them. I am now hooked to see your next posting.

I admire your courage, and I am convinced that your children will benefit greatly from this project. The day will come when they will thank you for the decision. Prayers for your safety and enjoyment.

Reader question: I delight in your postcards. I have lived in eight countries as an employee or in retirement. I have visited 80+ countries, generally on an expense account. May I ask what would have been your daily expenses if it were just you and Kate?

Tom’s response: I don’t think it would have been a lot cheaper. The kids don’t cost much. We pay more or less the same for meals and accommodations as we would without kids. As for zoos and other activities, Penny gets in free mostly. And the boys are half-price.

Reader comment: Are you sure the Chinese people are not investing in gold? My understanding of the Chinese culture is that they all invest in and hold gold as their preferred form of wealth.

I believe that they hold gold as secretly as possible due to fear of government confiscation. Why else would gold be ubiquitous and easily purchased?

I may be completely wrong and am interested in your comments. By the way, I’ve been following you for six months now and started an allocation of silver and gold.

Reader question: We here in North America keep hearing about the voracious Chinese appetite for gold. If the people you’re meeting have no interest in investing in gold, then who are the Chinese that are buying such enormous quantities? The government?

Tom’s response: The Chinese government has bought 100 tons of gold so far this year. That’s nearly 20% of total central bank gold-buying this year.

And China has a well-established gold mining industry, too.

Reader question: I have heard that China will be issuing a digital renminbi that will be backed by gold and will be issued over the next few months. China has been accumulating gold and has quite a stockpile. Do you think this will have an effect on China’s currency problem?

Tom’s response: No… I doubt a digital renminbi backed by gold will affect anything. You can buy gold at any bank in China. Yet the people in China we met didn’t seem to care much about gold. The recessions that are coming and the big inflation they’ll cause will be what get people interested in gold.

Reader comment: I look forward to your postcards, and I must say how they have kept me excited and saved me from depression… that is mainly caused by our government. I cannot believe this is happening!

In any regard, not only have your postcards firmed up my desire to spend my waning years in my life well, I find your assessment of what relates to the financial world today is highly beneficial.

Nowadays, it’s so difficult to get world news where I live, and most of the investment letters I get are based on the already well-reported base about the might or decline of the Chinese economy in relation to what’s going on with the U.S. government’s actions.

Along with your spirit and words about local conditions, your “boots-on-the-ground” report is very much looked forward to daily! Thanks much, with all the very best!

Reader question: How do you, Kate, and especially the children deal with the language differences in all the countries you’ve visited? The pictures you post show the children interacting with local citizens.

Tom’s response: It hasn’t been an issue except in China. Everywhere else, the people mostly speak English. China was hard. We used Google Translate and a lot of gesticulating.

Reader comment: I really enjoy reading your travel blog! You have such a lovely family. You are so blessed!

Reader question: I’d like to ask you about the surveillance cameras in China. You say that Chinese people say they like them, but is it possible that they’re saying this because (a) they don’t want to say anything negative about their country to a foreigner, and (b) it would be dangerous for them to criticize the cameras and the Chinese government (like a North Korean criticizing Kim Jong-un)?

In Hong Kong, where people are not so repressed, demonstrators have smashed many of the cameras. Anyway, thanks again for your wonderful postcards.

Reader comment: Really enjoy the comments and following along with your journey. I was just thinking that 10 years down the road, it would be interesting for you and your grown-up children to revisit the postcards and remember the journey and all the comments. Keep them coming!

Tom’s response: Thanks for the kind notes! As always, please keep writing us at [email protected]. Kate and I read every question and comment you send in.