KARAKSA HOTEL, OSAKA, JAPAN – We were in India, in a little town called Udaipur.

She fell eight feet – backwards – onto a cement floor. She landed square on her back and shoulders.

She didn’t cry. She just whimpered. Then she vomited and fell asleep.

When she woke up we noticed she had crossed eyes, and she couldn’t tell me what I was holding in my hand (an orange)…

This is the bunk bed she fell from. We took this picture an hour before the accident… 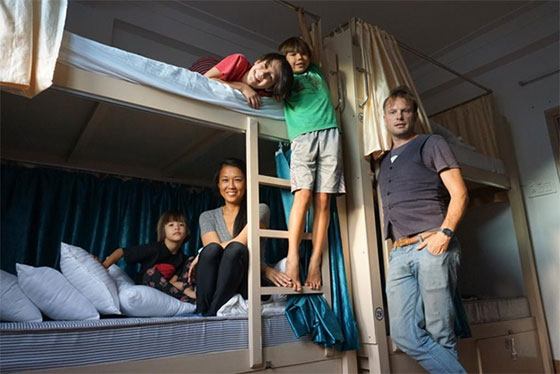 Greetings from Japan! My family and I are on a trip around the world. We’ve been traveling for 18 months, and we’ve been to 29 countries. Tomorrow we will complete our trip.

In yesterday’s postcard, I talked about how perfect our trip has been in terms of logistics. We haven’t had a single delay, screw-up, or disappointment. It’s been a flawless trip.

I ran downstairs with Penny limp in my arms. The owner of the hotel was working on his laptop in the little cafe. He put us on the back of his motorcycle and drove us as fast as he could to the hospital.

We weaved through the narrow streets of Udaipur, swerving around cars and tourists and cows and rickshaws. He was going so fast through the busy little streets, I remember thinking it was ironic we were risking our lives to get to a hospital. He dropped us outside the emergency room entrance. I removed my shoes, and we ran in.

They performed a CT scan and told me everything was normal. There was no brain injury. Penny slept for a few hours in the dirty hospital bed, and when she woke up, she could see again. We took her home.

The next morning, Penny seemed fine. She was joking around, and she was full of energy. She couldn’t remember being at the hospital, but otherwise, she was acting like her old self.

We were so relieved. But over the next week, we couldn’t get her to eat. Not even ice cream and soda. She was getting thin. We were starting to panic again…

Then, Kate, Dusty, Miles, and Penny got “Delhi Belly.” They became extremely sick with diarrhea and vomiting.

The vomiting and diarrhea were relentless and lasted for days. We couldn’t be apart from the lavatory. We certainly couldn’t leave the hostel. Everyone lost a lot of weight. Penny was skeletal.

That’s when I got a phone call from London that my mother was in the hospital, about to die…

We had to get back to London as fast as possible.

But how? Our stomachs were so sick. We couldn’t possibly travel. Delhi Airport was six hours away. Then the flight to London was another 12 hours.

First, we had to get out of that hostel. We thought it was dirty and was making us sick. So we bought train tickets, and I took us somewhere else. It was the train journey from Hell.

Kate and the kids had very upset stomachs, and they had to use the train’s toilet (a disgusting hole in the floor) over and over again for several hours.

We got off the train, and I checked us in to a sanatorium, where it was clean and we wouldn’t need to leave. Then I fetched medicine. We stayed in the sanatorium for six days, recovering slowly. Then, when we felt strong enough, we made the journey to Delhi. I booked an Airbnb near Delhi Airport, and we got there the day before our flight. 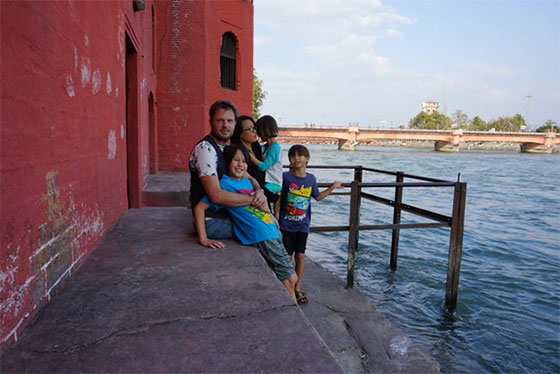 Things were going our way. My mother was in stable condition in the hospital. My aunt was by her side. Kate and the kids had stopped vomiting.

And that’s when we woke up in the middle of the night covered in bird mites.

We couldn’t risk bringing the bird mites with us to London and infesting my mother’s house with them, so we threw away our luggage. We got on the plane with nothing but the clothes on our bodies.

When we got to London, we stripped naked on the front doorstep of my mother’s house and threw all our clothes into the trash can. We entered the house as naked as the day we were born and went straight up to the shower. (My mother was in the hospital, so the house was empty.)

Over the next three months, everyone made complete recoveries… my mother, Penny, Kate, and the boys… we all got our full health back. We were able to fly back to India and resume our trip…

P.S. The way Penny fell onto the floor was… softly. I can’t explain it, but she seemed to float down from the top bunk and land gently. I’m convinced this saved her from a serious head injury.

P.P.S. The CT scan cost $40, and the doctors in the emergency room charged us another $20 for their consultation.

Reader comment: You said in your postcard that you wish your worldwide adventure would never end. I wish it wouldn’t end either because I enjoy your postcards so much. They are like a breath of fresh air compared with the awful news and events here in the USA every day.

You are a wise father, taking your kids to Hiroshima and Nagasaki. Perish the thought of Dusty at age 22 saying, “Dad, why didn’t you take us to Hiroshima when we were so close?”

I hope you send postcards from Iran or Argentina or wherever you end up. I love your observations and insight, and I wish I were in your shoes.

Reader comment: In the ’30s, Japan was fighting China. It needed oil. It got it from America. People in high places in America wanted to go to war against the Germans. But 80% of Americans were against war. It had only been 20 years, rounded off, since the last one, where my grandfather was killed in France. So those in high places came up with a plan: “We’ll have a sneak attack from somebody.” So they cut off oil from Japan. Japan got mad and attacked us.

Those in high places knew the Japanese were coming, so they had all the new carriers and newer warships away from Pearl Harbor. And left the old, WWI vessels to be destroyed. Who cared about our kids on those ships? The USS Arizona was commissioned in 1916, and over 1,100 lads ran out of oxygen in their trapped air pockets as the ship was upside down. They had time to think. Their bodies are still there. I saluted them each time I sailed past.

Those in high places knew where the Japanese fleets were and didn’t report or stop them, as they could have. The so-called “sneak” attack began. The fake media, as today, reported the “sneak” attack, and the Americans couldn’t join the military fast enough. Did they go to the Pacific and do the Japanese in? No, they were sent to Europe to fight the Germans. When that was done, they were sent west and ended that war. Except. The emperor of Japan tried to surrender, as the bombing had done Japan in. Tokyo was on fire from one end to the other.

A lady like Kate does NOT come around often – hold on to Kate for life and beyond… Kate, thank you for lifting up Tom.

PS: I went through a similar personal challenge in New York. Out of 40 years in New York, the first 25 years were very good. Every time I changed my job, my salary went up. Then the bottom fell off. It was a LONG uphill road for 10 years. Challenge after challenge. Finally, I thought I landed on a reasonably well-paid job. One year later, the Lehman shock hit me. I was one of the 15 million people who lost their job. Through this challenging environment, I have become thick-skinned and feel that I can live through the next global financial crisis.

My wife and I came back to Japan to live. The cost of living is much cheaper than in New York. I am now in the process of re-building my financial life through FX [foreign exchange] trade.

Reader comment: Thanks for your adventures. As a long-term resident of Japan, I can tell you that as a tourist, it is fun and amazing. But the reality is that Japanese detail-oriented society can be a pain in the neck, and as you experienced, they can be quite xenophobic. They also tend to self-censor… and ask about women’s rights or equality. Now women cannot wear glasses at work. No historical experience of human rights and equality. It is all Kabuki.

Reader comment: Love reading your postcards. Thank you – keep them coming. Will be sad when the trip and postcards end. They’re not just educational for your children but also for us who don’t have the opportunity to experience what you experience.

Reader comment: Tom, your postcards are a fun, fascinating read, please keep traveling and don’t end your trip yet.

I like gold and have a nice mix of pre-1933, and modern U.S. and Canada gold coins, and some good gold mining stocks for about 50% of my portfolio – I agree with your reasoning!

What I don’t get is how come there is as much pre-1933 gold as there is? It was forbidden and made criminal to not turn in. AND, there was a Great Depression on! How could so much still be around to buy?

I went to several National Numismatic Coin Shows and I saw acres of dealers with inventory – like shopping for a gun or a knife, there was so much! I’m adding more until I get to 75%! Yes, it’s rare, by comparison, but how is it that it still exists to the extent it does? Love your postcards!

Reader comment: I sure can relate to Japanese amnesia about WWII. I worked with Japanese tech and communications firms from the 1970s to 1990s. One person I respected and enjoyed working with the most rose to a very senior executive level at NTT – Japan’s AT&T at the time. The last time we met, he invited me to an Italian dinner in Tokyo – but requested that a translator be allowed to accompany us. At the end of the meal he – through the translator – went off on America as a violent, racist nation responsible for WWII.

If a PhD-trained engineer at the highest executive levels believed these lies, it is clear that Japanese education has amnesia about the pre-WWII period. By the way, I sent him a copy of Unbroken, but never heard back. And I still treasure my memories of Japan and its people.

Tom’s response: Thanks to everyone who wrote in. Kate and I read every note you send us! They’re an integral part of these postcards. Please keep writing us at [email protected].