“Got a haircut. Barber told me to buy gold. Said the Fed is printing too much money.”

“Got a tire fixed. Owner of the shop told me to buy silver. Said the Fed is printing too much.”

He didn’t say it, but the implication he’s making is that everyone — even barbers and mechanics — have already bought gold and silver. When there’s no one left to buy, the price must fall…

And with that, I’m starting to feel a growing impulse from my lizard brain.

“Take your profits,” it whispers. “A correction is coming.”

My family and I are traveling around America by car. We’re currently in Colorado, checking out the mountains and hanging out with our old friend and colleague, Dan Denning (coauthor of The Bonner-Denning Letter).

Dan has been taking us on hikes in Rocky Mountain National Park. Here we are earlier today…

Dan Denning, coauthor of The Bonner-Denning Letter, is showing
us around his home state

After our hike, we stopped at a coffeehouse in Estes Park. I had just paid the cashier when the owner approached us.

“Are you Tom Dyson?”

“I read your Postcards every day!”

Here we are with Kevin, the owner of Inkwell & Brew…

The owner of Inkwell & Brew, an Estes Park
coffee shop, recognized us in Colorado

Now, back to our gold story…

The First Time I Found Gold

I was 26 years old. I was working at Citigroup, which was, at the time, the largest bank in the world.

The world was in turmoil. The bubble in technology stocks had popped two years before… the World Trade Center had just been attacked… Enron had gone bankrupt… and the U.S. was preparing for war in Iraq…

It was an anxious time.

Gold had been in a bear market for 22 years at that point, and it was trading at its lowest price in 26 years.

If there was ever an unpopular, ignored investment that no one was paying attention to, it was gold in 2002.

And yet, Bill was recommending selling stocks and buying gold. He called it the “Trade of the Decade”…

How I Missed (Most of) the Trade of the Decade

I was utterly convinced by Bill’s (and others’) arguments about getting out of stocks and buying gold. Gold seemed like it had to rise. And I felt like even if I was wrong, I probably wouldn’t lose much money.

So I took all my money and bought gold. First, I bought a portfolio of gold stocks. Then, I opened a trading account and bought highly leveraged gold derivatives.

And finally, I was so excited about the idea, I approached my friends and family and asked them to give me money so I could buy gold for them, too. I ended up with 11 investors.

“Gold is going to correct,” said the voices. “You’ll lose the profits you’ve made. Better cash out now while you can still show a gain.”

I lost my nerve. I sold everything and returned everyone’s money.

Then, I watched in horror for the next six years as gold continued rising… while I sat on the sidelines and missed out on hundreds of thousands of dollars in profit for me and my investors.

I Couldn’t Sit Still… Even Though I Was Right

One of my all-time favorite books on speculation is the biography of Jesse Livermore. (It’s called Reminiscences of a Stock Operator by Edwin Lefèvre.)

Jesse Livermore was basically a fearless gambler who had a knack for making (and then losing) huge fortunes in the stock market. His biography documents his approach to speculation.

One piece of advice he repeatedly emphasizes in his anecdotes is “sit still when you’re right.”

“It never was my thinking that made the big money for me. It was always my sitting,” he says.

“Got that? My sitting tight! … Men who can both be right and sit tight are uncommon. I found it’s one of the hardest things to learn. But it is only after a stock operator has firmly grasped this that he can make big money.”

With my first foray into gold, I made the classic amateur mistake of not “sitting still.”

I can already feel the same seduction — that gold is overbought, and a correction is coming — beginning to nag me today.

This time, I’m going to ignore the whispers. I know they’re trying to make me do the wrong thing.

I’m not selling my gold until the Dow-to-Gold ratio hits 5. In the meantime, nothing will take away my gold position.

As I like to say, I’m going down with the ship this time.

P.S. I made the exact same mistake with bitcoin when I sold at $300. (I’d bought when it was under $10.) My friend and mentor Porter Stansberry – founder of Stansberry Research – now calls me “the guy who left $50 million on the table.”

P.P.S. The chart below shows the massive gold bull market since 2002. What it shows is that gold’s recent rise is really just a continuation of the bull market that started 18 years ago. We’re now entering “the next stage.” 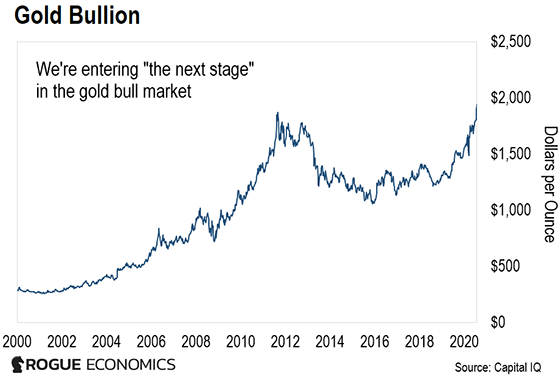 My minimum target for gold remains $10,000 an ounce over the next 5-10 years. What’s the best way to play it? I explain in this video…

Like what you’re reading? Send your thoughts to [email protected]gueeconomics.com.

Up first, readers have some questions about gold…

Reader comment: Hello Tom from Vancouver, BC. I’m enjoying your Postcards and thank you for your encouragement to hold gold. So far, thanks to my subscription and your sound rational analysis, I am good by 30% and thinking about going deeper.

However, as a business owner in these uncertain times, having cash reserves as a cushion are a strong consideration that has been holding me back until I came across a plan being offered by Georgetown Trust in Belize. They will purchase gold that is held in Zurich and set up a gold loan program with Cage International Bank that will lend or provide a line of credit at 5.9% for 75% of the value of gold held from $100,000.

Considering how gold has performed and expectations, 5.9% is okay. Just wondering if you know anything about this service? I anticipate many other business owners would have similar concerns that restrict their desire to invest in precious metals.

If I were travelling with a young family heading north in today’s environment, I would stay away from the west coast and travel inland up through Montana or the Okanagan Valley into Canada. Safe travels and thank you for your valuable well-grounded insights.

Tom’s response: I can’t give you personal investment advice, and I’ve never heard of that gold loan program. That said, it immediately raises my red flags. The whole point of gold is that it’s nobody else’s liability. I’m only buying gold with my savings.

Savings are, by definition, money I don’t need that I’m saving for a rainy day (retirement). For my cash flow requirements, I use U.S. dollars. It seems like you’re trying to do both with one asset, like “having your cake and eating it too.”

Reader comment: I’m a member of Tom’s Portfolio and have two questions. First, one of the recommendations is up about 140% at this point.

Do you recommend selling half and taking the initial investment off the table and taking a free ride on the rest? I imagine the market will go up and down, so I’m wondering if it makes sense to take some profits off the table now?

Tom’s response: Again, I can’t give personal investment advice. That said, I put those buy up to prices on those junior gold stocks to prevent the market makers from ripping off my readers in the immediate days after my report went out. It’s now safe to buy them.

In general, I’m sympathetic to the idea of taking some money off the table and having a “free ride.” But it runs against the point I made in my essay above. Personally, I’m sitting still until the Dow-to-Gold hits 5, come what may.

Reader comment: Hi Tom, there is more at work than currency devaluation going on for the meat prices. Right now, lots of slaughterhouses are closed due to COVID.

A workaround is to allow local butchers and farmers to sell meat that they prepare, however, the USDA doesn’t allow this. Supporting Thomas Massie’s PRIME Act would allow local meat producers to sell their goods on the open market.

Reader comment: I bought Teekay Tankers! It’s affordable for me, and I hope for a modest return with time. I have no training in the market, but I learn by reading your posts. It’s my favorite pastime to read about the markets.

Reader comment: I still enjoy all the beautiful pictures of your family adventures around beautiful America and of course the videos have been such a treat! Penny really is a hoot, and I love how she raises her hands and you allow her a voice. That is special for a father to do, and I know Penny will be a stronger woman for it!

Reader comment: If the family ever crosses into Washington State, I hope you make it to a cool town in Twisp, WA. (My mother-in-law lives there, and the mayor is a Korean woman!) There are three things I recommend…

1. Pick up a cinnamon twist at the Cinnamon Twisp Bakery 2. Saturday is the Farmer’s Market (make sure to wear a mask) 3. Visit Hank’s Market. The owner is Hank Conrad who basically owns the whole town. He’s a great guy and takes care of the people in the small town. You’ll also see taxidermized animals along its walls. They are massive. Not my thing but apparently, it’s his and his family. Impressive, nevertheless.

Then you can move on 9 miles north to the famous western town of Winthrop, WA. There are so many areas to camp all around there. Enjoy!

Tom’s note: As always, thank you for your messages! Please keep writing us at [email protected].