MEDICINE HAT, ALBERTA, CANADA – I’d wanted to visit the Democratic Republic of Congo for years. So when we were in central Africa last year, I took my chance. I crossed the border into the Congo at Bukavu, an important town in Congo’s unstable eastern region.

The Congo has been at war – on and off – since 1996. They have called it the “Great African War” or the “African World War” because nine African countries and 25 separate armed groups have participated in the fighting.

Statistics are pretty unreliable, but they say – with over 5 million casualties – the Congo War is the deadliest conflict since World War 2.

2018 was a bad year in the Congo. Fighting escalated… and full-blown war was back on the cards again. It’s a pretty dangerous place, especially the area I went to.

There was also an Ebola outbreak about 300 miles to the north. So I went with an experienced tour company to keep me safe…

Bukavu is a city of 5 million people in eastern Congo. I took the shot below from the back of my guide’s car. 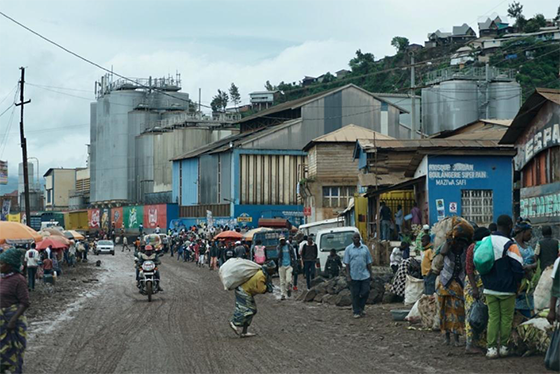 I crossed the border into the Congo at Bukavu

Many rebel groups operate here, especially here in the eastern part of the country. There’s a major United Nations presence, too.

(The month before I was there, rebels had killed seven U.N. troops and injured 10 more in fighting a bit to the north.)

Here’s a shot from outside Bukavu. U.N. traffic is moving in both directions… 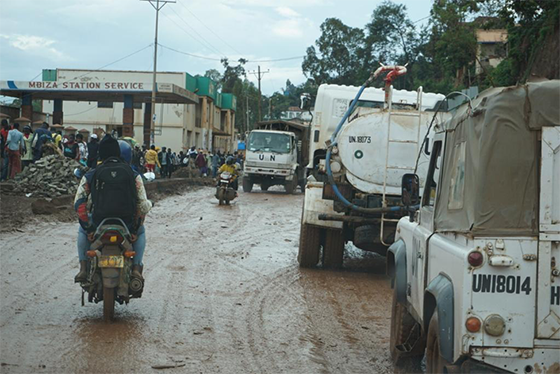 Outside Bukavu. You can see the U.N. trucks moving in both directions

After years of war, the roads in the Congo were TERRIBLE. Mud everywhere. Giant potholes everywhere.

This is the main “highway” into the city of Bukavu, which is also a trading post for eastern Congo… 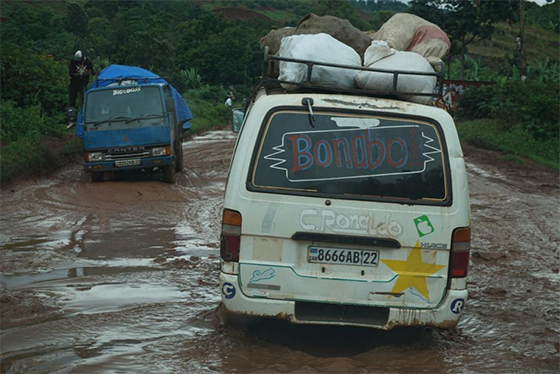 I was tossed around for four hours on this road to go see the mountain gorillas. It was a very uncomfortable journey, and another reason tourists won’t come to the Congo.

P.S. Here’s a biker getting up a steep hill by holding onto a slow-moving truck (taken from the backseat of the bus). 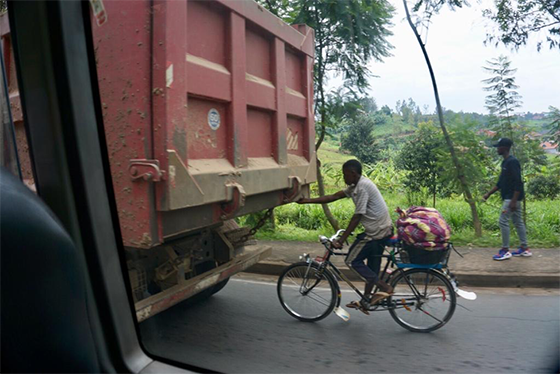 Readers turn to marriage, after Tom told the story of his reconciliation with Kate… parenting, and the scary experiences that come with it (like Penny’s 8-foot drop out of a bunk bed in India)… and life on the road…

Reader comment: Love reading your postcards and other readers’ comments; very interesting and instructive. Must say though, after decades of marriage, seems to me that 90/10 is often required at times in relationships … when one is ABLE and willing to give and the other cannot for whatever reason. Hopefully, this balances out over time so that each person feels that they have been supported in the relationship. There may be “good” times of 50/50 or 100/100 reciprocity – whichever way you choose to describe it, but life often doesn’t cooperate in our little plans. Therefore, surely choose a partner capable of giving 90/10, should it be required for a bit. Congrats on the renewal of your marriage and your “wolf pack.” It does my heart good to see a happy family. Continued good luck!

Reader comment: I am truly enjoying your Postcards as if I were seeing the world in glimpses. I also love the way you and Kate were able to rediscover and rekindle your marriage. That’s a blessing! I had a daughter who also fell like Penny when she was nine months old. I was carrying her and, needing some rest, I sat her on top of a narrow (18-inch-wide) 4.5 foot tall table by the window with a narrow cloth covering. Confident she would not move, I picked up her toy three feet away. I saw her falling softly, sitting on the cloth. The fall sped up only when she was a mere six inches away from the concrete floor. Unable to move, I watched her in horror and… in awe. I felt so stupid, too.

Reader comment: The product Balance of Nature has mental relaxation as part of its many benefits. Amazing immune builder, plus plus plus. Great for kids, and certainly as a nutritional base for on the road. A top-three life-enhancing product. Enjoying your travelogue. I assume your wife is picture phobic. Hey, so are the Amish…

Reader comment: I have really enjoyed your postcards. I was fortunate enough to have really amazing, open-minded, adventurous parents who took us everywhere they went. We traveled all over Canada and the U.S. every time my father got a new job. I even hitchhiked from Boston to Toronto, Montreal, Canada and back with my Dad in 1970 at nine years old.

The things I remember the most are the experiences we had and the wonderful people we met along the way. My parents sent me to England and France in the summer of 1978 for four weeks to learn about European history and culture. I have had the travel bug ever since, and have been to Western Europe a few times as well as the Mediterranean and North Africa. I’m hoping to go to India with my wife of six years soon (her Dad and siblings are Indians from Gujarat). Keep on doing what you’re doing; your kids will never forget their amazing parents and experiences.

P.S. I’m a Palm Beach Letter subscriber and have a mix of physical gold, silver, Gold ETFs, Gold Royalty stocks, and miners in 50% of my portfolio.

Tom’s response: Thanks for all the messages! Kate and I read every one. Please keep writing us at [email protected].