MEDICINE HAT, ALBERTA, CANADA – I can’t believe I’m hacking my way through the Congolese jungle with a bunch of soldiers, looking for gorillas…

This is Kahuzi-Biega National Park in the Congo. With me, I have two armed guards, two pygmy trackers, and a guide.

There are rebel forces operating inside the park, hence the security… 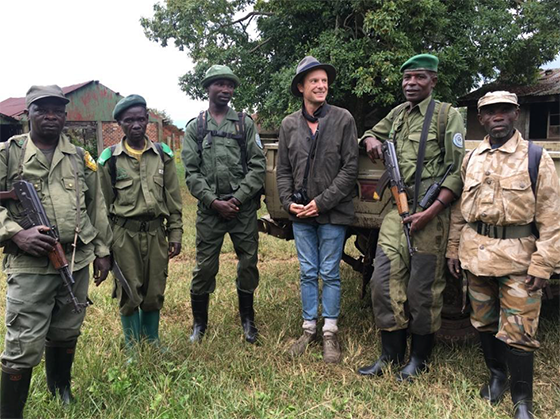 Hacking my way through the Congolese jungle. The soldiers are there to protect me from rebel forces

Greetings from Canada! It’s the last stop on our circumnavigation of the world.

Before coming back to North America, Kate and I spent a lot of time in Africa during our trip. I even got the opportunity to visit the Democratic Republic of Congo, a country I’d wanted to visit for years.

The DRC is currently AT WAR, and the conflict is particularly intense in the region I went to, so unfortunately I couldn’t bring Kate and the kids. There was also an Ebola outbreak 300 miles to the north…

Lowland gorillas live in troops. And (unlike mountain gorillas) there can only be one alpha male.

This is Bonane. The silverback. The alpha male. 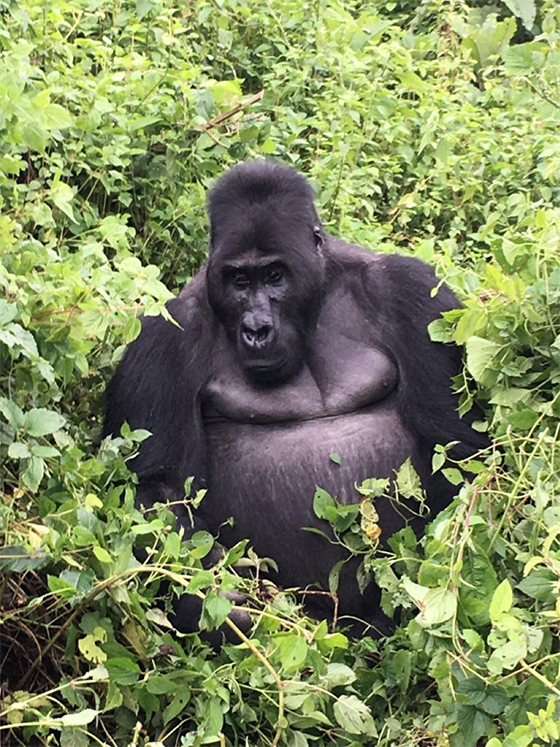 Several years ago, Bonane challenged his father to a fight and won. He took three of his father’s females and gave his father 24 hours to leave the territory.

Two of the females have already given birth, and the third is pregnant. There are now nine gorillas in Bonane’s troop, his seven females and two babies.

Here I am in Bonane’s territory, surrounded by his family. 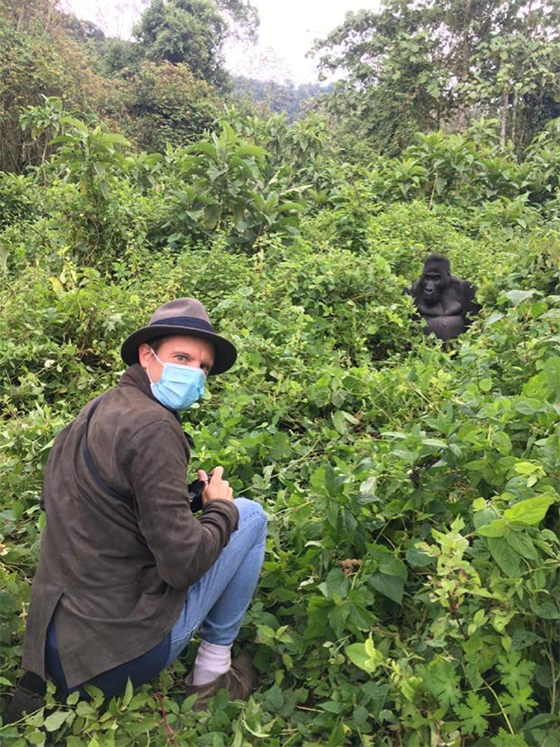 Unfortunately, gorillas have gotten caught up in the conflict, and they’ve become enemy targets. These gorillas get an armed guard, 24 hours a day, seven days a week…

P.S. This woman is in her 60s. She is carrying onions to the market. The market is about three kilometers up the road, over several hills.

Just out of view, there are dozens of other women like her – all in their 50s or 60s, all walking barefoot – carrying these heavy onion bags to the market.

Around here, men don’t do this “heavy moving” work. Only women. 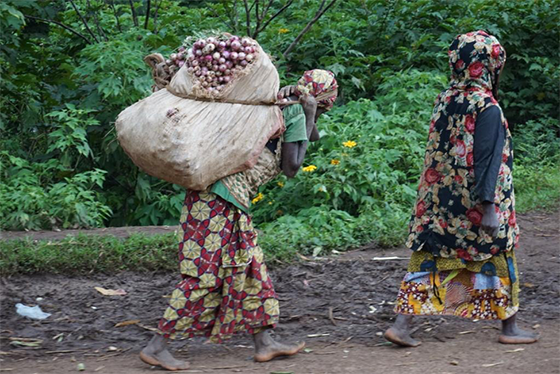 Eastern Congo has been called “the worst place in the world to be a woman” and “the rape capital of the world.”

This is Bukavu, a big town in eastern Congo. In June 2004, this town was captured by a rebel group, and the warlord declared it an “open town” for his troops for the weekend. Wikipedia says 18,000 women were raped over three days. 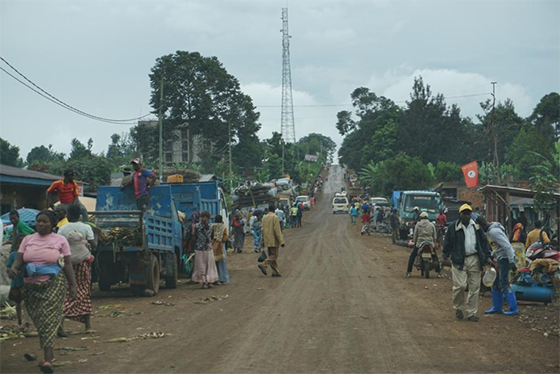 Kate is on many readers’ minds today, after she helped Tom get through his depression… and encouraged him to take the trip that started these postcards…

Reader comment: I just read your post “My Wife Saved My Life.” It almost brought tears! But I was reading it at work, so I couldn’t get misty-eyed. I absolutely love reading about marriages being reconciled. It sounds like you and Kate are a perfect match.

It was utterly safe in Japan. In fact, I used to ride the city busses from off base to swim practice at eight years old. Alone. It required two transfers before finally arriving at the base pool. Neither my parents nor I were the least bit anxious about this. This experience changed me, and really helped me to appreciate foreign cultures. Especially the food!

Your title said “My Wife Saved My Life.” I don’t doubt that she did. But I want to offer up a theory. The God who created everything (Romans 1:20) put you two back in close contact. Thankfully, both of you went along with it. I am so encouraged that your soon-to-be ex-ex-wife consented to bring you along on your travel adventure. I know you’ve mentioned your religious search. I hope you will continue.

I truly hope you will find peace and that you will find a good place to settle before heading out on further travel adventures. Thanks again for the wonderful postcards and the excellent investing advice.

Reader comment: Thank you for sharing your stories and insights with us. Please continue to write and let us know how you, Kate, and the children are adapting after your round-the-world great adventure!

Reader comment: Thanks for sharing your personal experiences dealing with depression. Gave me insight into what our teenage son who has depression might be battling. (Also, wondered where you were when you “disappeared” from the Palm Beach Research Group publications.) Thanks, too, for recommending whole life insurance, which we did buy. Hoping for the best for you and your beautiful family during Christmas and the new year! God bless…

Reader question: I have only seen your postcards for a couple of months, after Bill Bonner’s Diary sent out your details. You quote a lot of prices on your way round, and I’d be really interested to know how the costs came out in Eastern Europe. Can you give details or send a link? I’d like to wander round there in the spring, so maybe starting three months from now. The postcards have been fascinating… Best wishes to you and your family.

Tom’s response: Eastern Europe was cheap. Every country is different, but generally speaking, it was about half the price of the U.S. The cheapest country we visited on the entire around-the-world trip was Turkey. Bulgaria, Albania, Hungary, and Serbia were all cheap too.

Reader comment: Please don’t take Penny to a chiropractor. I believe they are dangerous, particularly for head injuries. I read a book called Trick or Treatment by Simon Singh and Edzard Ernst. They revealed how hopelessly flawed chiropractic treatment on neck and head injuries is. Many deaths soon after treatment. Seek proper neurological advice if needed.

Really enjoyed living vicariously through your postcards. Sadly, I have never had the money to travel. Hope you and your lovely family continue to prosper.

Reader comment: Now that you’re back in North America, be careful. You’ve come home, but not really. For you and Kate, as adults, you may slip back into the culture a bit more easily. But the kids have lived a significant percentage of their lives outside the U.S. Their passports may say USA, but they are now citizens of another culture, a third culture. It’s not completely their birth country’s culture, and it’s not that of any of the other countries they’ve visited.

They are truly world citizens and cannot be expected to fully assimilate into American or British or whatever culture. Please be sensitive to their needs and understanding when the world around them doesn’t make sense to them. They will have, as they grow up, the ability to select from the various cultures they’ve experienced and build unique, beautiful lives from the many, many sources they’ve experienced.

Reader comment: Thank you for all your wonderful reports from around the world. It has truly been a treat to learn of your trials, tribulations, and travels. It is particularly interesting to me that you have landed at Medicine Hat, as that is where my dad is buried after being killed in WW2. I was 10 days less than a year old on that occasion. Your smile speaks volumes as to your happiness after that incredible trip. Well done!

Reader comment: I’ve read many of your postcards and enjoyed the stories and the writing – always quite interesting. I only have one question – which stems from the December 12 reader feedback that you posted – and that is: Why would you tarnish your wonderful diary by choosing to publish, from among the great number of comments you must receive, a letter from a disturbed, devoted crackpot conspiracy theorist who apparently hates our great nation?

I for one will surely take the American freedom that he obviously holds in such contempt over the truly oppressive governments in so many other parts of the world – some of which you detailed among your journeys.

Tom’s response: Thanks to everyone who wrote in. Kate and I read every note you send us!

Please keep writing us at [email protected]. Your messages are an integral part of this project.