LONDON, ENGLAND – I stood in Mexico. I wanted to be in the USA.

The challenge: Get across the border without showing any documents, like the undocumented immigrants do.

The vast majority of illegals walk 25 miles across the desert in Arizona or California. I chose the “wetback” method – sneaking into Texas by wading across the Rio Grande. Less chance of getting lost or hurt that way, I figured.

The Rio Grande marks the border all the way from Arizona to the Gulf of Mexico. My friend (an American citizen) and I chose a section of the river between Presidio, Texas and Ojinaga, Chihuahua.

We figured we could simply walk five or 10 miles along the river from Ojinaga, to a point in the countryside where no one would see us, wade across, and walk back to Presidio.

So that’s what we tried…

Holed Up in London

Greetings from London! We’re holed up at my mother’s house, eating, sleeping, and relaxing.

Not much to report, so I’ll continue my tramping stories…

(You can catch up on the first parts of this story here and here.)

We walked away from Ojinaga along a dirt road, heading west along the river. There was trash all over the place… cigarette butts, beer cans, and snack wrappers. I wondered if illegal immigrants had left this trash behind. Mangy dogs snarled at us from the houses above us.

I had imagined the Rio Grande to be a shallow river one could wade across, but this was a big, swollen river. I estimate it was 75 feet across and 15 feet deep.

The water was flowing gently west. We followed the river for several miles. Town turned into farmland.

We wanted easy access to the water on both sides of the river, but we didn’t want anyone to see us swimming across. As long as we weren’t caught in the act, we figured, we couldn’t get into any trouble. We found a gap in the bushes.

The next problem was how to get across the river without getting our wallets, passports, clothes, and cameras wet. We found a gallon milk container with the top cut off.

I went first. I took all my clothes off, stuffed them into the gallon jug with my valuables, and waded into the river. I swam with one hand and held the jug out of the water with the other.

Here I am swimming across the river… 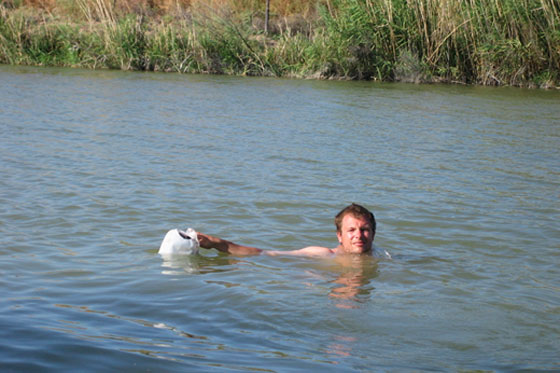 Swimming across the river while keeping my valuables dry

It took about five minutes for me to swim across. When I got to the opposite bank, I was huffing and puffing from the effort. I dumped my things on the opposite riverbank. Then I swam back with the empty jug so my friend could use it.

We both crossed the river, got dressed again, and prepared to walk back to Presidio.

“Mission accomplished,” I said to my friend as he finished tying his shoelaces. “That was easy!”

We started back to Presidio.

After some time, we came to another river. This river was so shallow, we could cross it by stepping on the rocks just below the surface. We wouldn’t even need to take our shoes off.

My friend went first. When he was about halfway across, a green and white truck appeared from behind some bushes. A Border Patrol agent got out of the truck and stood by the edge of the river, watching us approach with a look of bewilderment.

“Are you aware this is the U.S.-Mexico border and you’re entering the U.S. illegally?” he asked.

The big, swollen river we’d swam across earlier must’ve been a tributary… and we’d only just now crossed the Rio Grande. Shallow, like I’d imagined it.

The agent raised his eyebrow.

“Get in the back of the truck. You’re under arrest.” 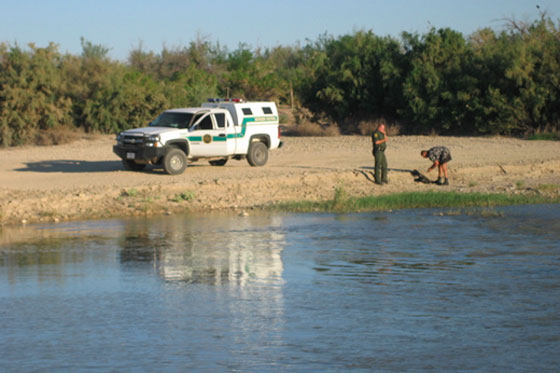 The agent took us back to the station in his green and white truck.

They detained us for the next eight hours, scrutinizing our documents, checking our backgrounds, and asking us questions. Then they set us free.

“It’s an offense to cross the U.S. border except at official border crossings,” they told us. “Don’t let us catch you again.”

Reader question: What were all those empty cities in China about? Is it a facade? I remember a Frontline documentary in which Mao Zedong fooled foreign visitors with window dressing, while millions in the countryside were starving…

Tom’s response: I spend a lot of time thinking about this question. It’s not a facade. The Chinese build a lot of things they don’t need now (railway systems, roads, buildings, etc.).

The two big questions are a) can they afford it? and b) is it visionary, or will they become “white elephants,” assets whose cost is out of proportion to their usefulness?

Reader question: Thank you for sharing your travel experiences, very entertaining and enlightening.

Question: Are you prepared for what might happen if gold doesn’t perform as you anticipate? For example, Elliott Wave Theory (Robert Prechter) said gold would take a nosedive in the not too distant future.

It appears you’re putting all your financial eggs in one basket. Seems kind of risky? Please clarify or explain. Thanks, and best wishes.

Tom’s response: Mine is not a bet on gold. It’s a stock-market-timing strategy. We’re in the stage of the cycle where we need to be out of the stock market. That means sitting on the sidelines in gold until stocks get cheap again. Then buying stocks when the Dow-to-Gold ratio goes below 5.

So I’m betting specifically on gold doing better than stocks. Gold may fall. That’s fine by me, as long as stocks fall even more. (Prechter said the Dow is going below 1,000, which would definitely send the Dow-to-Gold ratio below 5.)

That said, if my hypothesis is flawed, and we’re not in a valuations bear market like I wrote about here, the Dow-to-Gold ratio will rise. I’ll be stuck on the sidelines, watching the stock market rise, earning no interest or dividends. Not ideal, but it won’t be the worst outcome, either.

I’m okay with that risk. Because I’m risking a little to make a lot, with a high probability of being right, which is the definition of a great bet.

Firstly, I think it’s interesting that you had a camera or a smartphone at that time, even though you had no money or credit cards and had to scavenge for food in dumpsters.

Secondly, I think it’s interesting that there is such a huge contrast between (a) young Tom Dyson deliberately putting himself in very dangerous, uncomfortable, insecure situations, and (b) people like me (approaching retirement), who enjoy reading your postcards, and who are interested in investing because they want financial security and a comfortable life – the exact opposite of your situation in Mexico.

Thanks again for your postcards, and good luck with the rest of your life, to you, Kate, Dusty, Miles, and Penny.

Tom’s comment: Thanks for writing in! Messages like these are an integral part of our postcards. Please keep writing us at [email protected].