Editor’s Note: Recently, Bill reintroduced readers to his long-time colleague, Tom Dyson. Tom sees what Bill sees. The Greed/Fear gauge – the Dow-to-Gold ratio – is headed lower. Tom has gone “all in” on this trade by “burying” gold and betting on lower stock prices. He checks in with readers in today’s edition of the recurring series, Postcards From the Fringe.

If Bill is the ship’s skipper, and I am in the crow’s nest, then I’ve spotted something…

It fell as low as 6 in 2010. But it has spent the last nine years rising back up… a countertrend rally built on artificial liquidity… reaching as high as 22.36 last year.

From my crow’s nest, I see that this “rebound” finished last year. The Dow-to-Gold ratio is falling again. 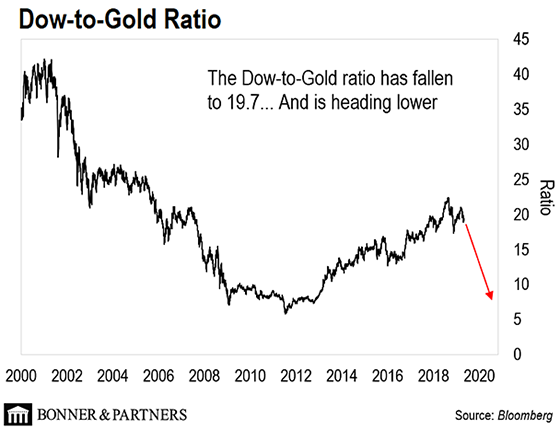 That’s the trade. Bet that the Dow-to-Gold ratio keeps falling.

1) We’re aligned with the primary trend AND the short-term trend, so momentum is behind us, and

Figure out the big picture. Wait for the thing to move. Have a plan. Jump on.

That’s how to trade.

I’ll keep you up to date on the trade. The Dow-to-Gold ratio currently stands at 19.69.

But for now, I’d like to tell you the story of how I met Bill.

I was working for Salomon Brothers in London on the legendary trading floor Michael Lewis wrote about in Liar’s Poker, the largest trading floor in Europe. The year was 2003.

I was hungry – to be a hedge fund manager or a Big Swinging Dick on a trading floor somewhere. And I was indoctrinating myself night and day in the art of speculation… by reading books, playing poker, and trading futures.

Their ideas captivated me.

I’d ride the tube – the underground train in London – reading the latest issue of whatever it was, sunk low in my seat, casting an occasional furtive glance to make sure no investment bankers were reading over my shoulder.

I’d found my place… on the investment fringe.

Then, I did two things any investment banker would think were crazy…

First, I put my entire life savings into gold mining shares and gold futures contracts. And I convinced six of my mother’s bridge friends to give me money, and I did the same thing with that (more on that in a minute).

Second, I wrote to Bill and told him I’d quit my job at Salomon Brothers and come work for him, for free, if he’d give me a job at the Daily Reckoning, his newsletter at the time.

Bill forwarded my note to Addison Wiggin, another colleague of ours in the newsletter world, who took me out to dinner with Dan Denning. But he never followed up with me.

I quit Salomon anyway, flew to Mexico City without any money (literally no money or credit cards), and hitchhiked my way to Chicago by freight train, scavenging from dumpsters, sleeping in the streets, and sending hilariously ironic newsletters to my lawyer and banker friends back in England.

I also sent these emails to Addison, out of a sort of perverse revenge for not hiring me. But then, he asked me to Paris to hang out with him, Dan, and Bill for a few days, an invite which I gratefully accepted. Despite my stench of garbage, they offered me a job in Baltimore.

And as for the long gold trade…

And so you see, this isn’t the first time I’ve put my life savings into gold, launched myself on a crazy adventure, and sent absurd emails to my friends back home…

How will it end this time?

P.S. The travels continue. We are a gypsy family… wandering hobos… blown from place to place like seeds in the wind. We find homestays where we can, using Airbnb or recommendations from friends. We stay for a night or three, and then we’re off to the next place with our little suitcase in tow.

We moved again today – away from the beach and into the backwaters. Our new place is accessible only by boat.

Here we are arriving…

Tom and family arrive by boat to their lodgings

It’s nice, but it has two quirks. First, the house has a severe tilt. So you stagger into a wall sometimes. And the kitchen table creeps inexorably across the floor.

Second, salt water comes out of the taps, which ruined this morning’s coffee, but otherwise isn’t an issue.

Here we are leaving the beach…

Tom and family leaving the beach

P.P.S. Please send me your feedback! No matter how critical you are, I’ll publish it… (without revealing your identity).